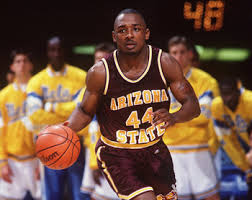 The recent ESPN 30-for-30 Films documentary chronicling the 1978-1979 Boston College men’s basketball team that shaved points for the Lucchese Crime Family out of New York entitled “Playing For The Mob” taught viewers the true story behind the beloved 1990 Martin Scorsese gangster-flick Goodfellas and the tale of mafia infiltration of big-time college hoops.

A decade and a half later, members of the Chicago mafia perpetrated a similar scam, getting their hooks into the Arizona State men’s basketball program, a point-shaving scandal that celebrated its 20th anniversary this year.

In 1994, Arizona State student bookie Benny Silman, alleged Chicago mobsters, Dominic (Nicky Trucks) Mangiamele and his son Joseph and reputed Windy City mafia associates Joe Gagliano, Jr. and Jimmy Basso, paid the Sun Devils’ starting backcourt of Stevin (Headache) Smith and Isaac Burton, thousands of dollars in cash to throw four games. Intentions were to fix a fifth game, but the plan fell through due to the FBI getting wind of what was going on and the fixers were stung with steep losses when Smith and Burton got spooked and decided to abandon the point-shave mid-contest.

Silman, the Mangiameles, Gagliano, Jr., Basso and the two players were all federally indicted for their roles in the game-fixing plot in 1997, convicted in 1998 and sentenced to short prison terms.

Raised in Brooklyn, New York, Silman moved to Arizona in 1990, enrolling at ASU and quickly becoming the largest student bookmaker on campus. One of his biggest customers was Smith, a high-scoring combo guard, All-PAC 10 selection and NBA prospect from Dallas, Texas.

In early 1994, Smith owed $10,000 in gambling debts and he and Silman came up with a way for him to clear it from the books – fix ASU Sun Devils basketball games by manipulating point-spreads for games the team was favored in.

The first game they decided to fix was what looked to be a lopsided Pac-10 affair between ASU and Oregon State, with the Sun Devils favored by 14 1/2 points at home. Introduced to Gagliano, Jr., an Illinois-born stock market investment advisor living in Phoenix, by a roommate of his who was related to him, Silman got Gagliano, a great nephew of feared Chicago Outfit enforcer Joseph (Joe Gags) Gagliano and his pal Basso, the son of Outfit Northwest-suburban gambling lieutenant Dominick Basso, to loan him $20,000 to put on the game in Las Vegas.

Unbeknownst to Silman, Gagliano Jr. and Basso were being backed by Nicky and Joe Mangiamele, mob bookies that according to the Chicago Crime Commission, were part of the Outfit’s Southside Crew, reporting to capo John (Johnny Apes) Monteleone at the time. Nicky Mangiamele owned a trucking company with his brother Robert and Joe Mangiamele was a Cook County Sherriff’s Deputy.

On January 27, 1994, ASU beat Oregon State 88-82, failing to cover the near 15-point “number” and setting Silman and Headache Smith, who had brought Burton, his teammate and backcourt partner, in on the scheme, on to an irrecoverable path of self-destruction.

The following morning Silman took an early-morning flight to Las Vegas to collect his winnings from Gagliano, Jr. and was introduced to the Mangiameles and instructed to begin planning another fix. Without having realized it when he borrowed that 20k from Joe Gagliano, Jr and Jimmy Basso, Bennie Silman had gone into business with the mob.

Silman and Smith fixed the very next game against Oregon. At this point, word began to leak out to certain pockets of ASU’s Tempe campus, located just outside of Phoenix, on what was happening. One of the people the information reached was local Phoenix gangster Sean (Big Red) Papello, a 6-foot-6, 325-behemoth drug-dealer and mini racketeer that muscled in for a piece of the action.

Smith was pocketing $20,000 per game, Burton a little over $1,000 per fix. Two fixed games later and the season beginning to wind down, the Chicago mob ordered Silman and Smith to work their magic one more time.

They shouldn’t have pressed their luck.

Things spiraled out of control quickly, hours before the players even stepped foot on the floor for the Sun Devils second-to-last game of the regular-season against lowly Washington, favored by 11. Chatter about the fix reached so many people that masses flocked to Vegas to let their money ride on the sad-sack Huskies, getting 11 points. By game-time, millions of dollars had been placed across hotel-casinos across the Strip, plummeting the line an unheard-of 10 points down to a mere 1 on a meaningless Pac-10 affair that under normal circumstances would never even sniff that kind of action.

Red flags were everywhere. Antennas went up in every major sports book in the city. The Nevada Gaming Commission was informed and they in turn contacted the FBI. When tip-off came on March 5 in Tempe, the FBI had agents on hand. And when Headache Smith, the then No. 2 scorer in ASU history, played like garbage in the first half and the Sun Devils trailed 37-35 at the break, the federal agents descended on the locker room to tell head coach Bill Frieder of their suspicions and confront the team.

The agents addressed the team and told them they knew the game was being fixed.

“A pair of FBI guys came in at halftime and said, ‘Listen, the gig is up, we know some of you are trying to manipulate the outcome of this game,” a source in the locker room tells the Mafia Insider. “We couldn’t believe it.”

With Smith and Burton changing their tune and straightening out their early bad play, ASU went out in the second half and trounced over its’ opponents, coasting to a 73-55 win and losing a lot of people, including the Chicago mafia, a lot of money in the process.

Rightly or wrongly, everyone blamed Silman. Big Red Papello met him at his apartment and pummeled him. Gagliano, Jr. and the Mangiameles left angry messages on his voicemail. Papello died of a supposed drug overdose in the weeks that followed, arising the belief in some that he was possibly killed for his role in the fix-gone-bad and the OD was actually staged.

Eventually, things died down. Silman, Smith and Burton all graduated and went on their ways. Silman stayed in Phoenix and opened up a coffee stand in America West Arena. Smith and Burton headed overseas to play basketball professionally, Smith’s dreams of being drafted into the NBA squashed by the rumors of the fixed games that were attached to him. After playing for a few seasons in Europe, Headache got his chance in the NBA, signing two short contracts with his hometown Dallas Mavericks in 1997, months prior to the indictment that ended his career.

That summer one of Smith’s friends got arrested for credit card fraud. In order to get out from under the charge and possible jail time because of his previous criminal record, he told police about what he knew regarding Smith, Silman and Burton and the games they were fixing in 1994 at ASU. The case that was long suspected was finally made and on December 7, they were all indicted, along with their mobbed-up co-conspirators. Silman did the longest sentence of the bunch, serving four years. The Mangiameles both did less than a year apiece.