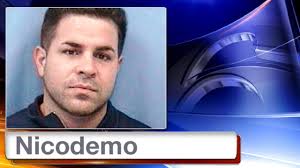 The Rarest of Entities

Old School and we aint talking about the movie starring Will Ferrell and Vince Vaughn.

It appears that Philadelphia Mafioso Anthony Nicodemo, once a fast-rising presence in the ranks of the Pennsylvania underworld, embodies the same gangster-to-the-core lifestyle and mantra as his mob mentor, South Philly Godfather and current South Florida resident “Skinny Joey” Merlino (away serving a four-month prison sentence for a parole violation).

Nicodemo didn’t blink last Friday in state court when he pled guilty to murder-conspiracy charges in connection with the poorly-executed 2012 gangland slaying of convicted drug dealer Gino DiPietro, swallowing a bitter pill in the form of a 25-to-50-year prison sentence while staying true to the all-but-lost mafia credo, ‘death before dishonor.’

This type of move is so unprecedented these days people are scratching their heads, looking for ulterior motives. More than one member of the Philly underworld scene has mentioned to me the similarity of Nicodemo’s plea agreement (copping to a third-degree murder conspiracy from a first-degree homicide charge he faced in his first trial last year) to that of “Merlino mob” turncoat Roger Vella, implying that he might be planning to or already has “jumped ship” so to speak.

Here’s what I believe: Until proven otherwise, Nicodemo is the definition of a stand-up guy, willing to basically give up at least a quarter of his life span on behalf of the oath he allegedly took when he was inducted into the mob years back.

For all the dumb this guy has done, this is smart. He did the math. If he lost at his second trial, he was done for the rest of his life. This plea makes it possible for him to still have a good chunk of time as a free man left when he eventually gets out. Nicodemo is 43 right now, if all goes well he might be out by 65. That’s 20 years, maybe more, of his golden oldies he’ll get to bask in, with a reputation cemented as iron-willed and the opportunity to return to the streets in an aura of reverence afforded to only a select few (see Chickie Ciancaglini)

There’s no doubt he has a get-out-of-jail-free card. But he’s not using it. In a nutshell, Nicodemo can probably sink the whole Philadelphia mob world with a single stroke of a pen and his signature on a cooperation agreement with the FBI. They’ve come calling numerous times and each time he’s told them to hit the bricks.

Nicodemo can almost certainly tie several members of the Philly mafia to murders carried out in the not-so-distant past, specifically Merlino, a man the FBI has a hard-on for like no other and would do anything to lock up in a cage for the rest of eternity.

He isn’t though. And he seems to be making up for past sins by accepting his penance like a man and taking the road, while less traveled now days in the American mob, is no doubt most honorable.

Another kind of Round 2

Mob watchers didn’t get a chance to see Rd. 2 of the State of Pennsylvania vs. Philly mafia ‘Blue Chipper’ Anthony Nicodemo in the case of the murder of Gino DiPietro, with Nicodemo copping a plea, but the U.S. Government might want to get in on the action, too.

Ultimate Philadelphia mob insider and award-winning tv journalist Dave Schratwieser (Fox News), who broke the Nicodemo-to-plead guilty news via Twitter Thursday night, also Tweeted that the Feds have told Nicodemo that they could be charging him in the future, possibly regarding the same crime.

If that ever occurs, the Philadelphia U.S. Atty’s Office would be taking a cue from the Detroit office, where the Feds indicted reputed Detroit mob capo Joe (the Hood) D’Anna on a RICO-extortion beef spawning from a 2011 baseball-bat beating of a rival restaurant owner that D’Anna already pled guilty to in state court and served three months in jail for. D’Anna’s federal trial begins this month.

Whether Phil Narducci is the No. 1 power in the Philadelphia mafia or not, word is he badly wants to be.

Narducci, 53, has been steadily gaining juice in South Philly mob circles since he’s release from prison in 2012 on a racketeering bust from the 1980s and according to multiple inside sources is letting it be known he wants the top spot in the Family.

One local underworld source, says Mazzone and Merlino, who doesn’t get along with Narducci, are considering the request and if it does become official and he assumes day-to-day control of mob affairs in Philadelphia, it would be done to appease the power-hungry Narducci.

Per other sources, Mazzone has been heard discussing the prospect of Narducci’s possible ascent with his closest advisors.

“Stevie told some people “shit, if he wants to take the heat and it calms him down, we’ll let him do it’” said one source aware of the conversations.

Mazzone has allegedly been acting boss and street boss for Merlino since 2008 when he was released from prison after serving a near-decade on a racketeering conviction. Extremely well-liked and heavily respected, Mazzone is known to run interference for his buddy Skinny Joey and is the man singularly responsible for keeping Narducci and his loyalists in-check, per sources on the street and in law enforcement. If Narducci becomes full-fledged acting boss, these sources contend, Mazzone will be remain in some sort of street boss capacity.

Merlino went down in the same case and after he was released in 2011, he’s relocated to Florida, where he’s running a restaurant in Boca Raton and still reportedly receiving tribute envelopes and reserves final say in Philly mob activities, according to law enforcement.

Another rumor beginning to circulate related to Narducci, son of slain Philadelphia LCN capo Frank (Chickie) Narducci, is that he still has an axe to grind with Joseph (Joey Pung) Pungitore, another recently-freed 1980s-era mob soldier back on the street and the man that helped murder his father. Those close to the situation, speculate Joey Pung could be in danger, as is a still treading-on-thin-ice George (Georgie Boy) Borgesi, Skinny Joey’s former consigliere said to be getting on the bad side of a lot of different people these days.