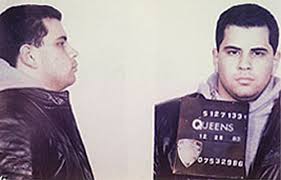 This is according to the parole file of the 46-year old Wershe and a log of the cooperation the former baby-faced narco-world wunderkind provided the Feds between 1991 and 2003.

While working for the government and housed in a Federal Witsec unit in Arizona in the early 1990s, Wershe learned of a plot by iconic New York gangster Salvatore (Sammy the Bull) Gravano, who he was being held behind bars with, to orchestrate the assassination of Junior Gotti, the then-Godfather of the Gambino crime family and tipped off the FBI. With the information in tow, the FBI foiled Gravano’s plan to hit the son of his former boss, John (The Dapper Don) Gotti, at that time imprisoned on murder and racketeering charges and a top confidant-turned-bitter enemy of his. Gotti died in 2002 in a prison hospital, his body ravished by cancer.

Per Wershe’s parole jacket, Gravano desired to have Junior Gotti killed in 1993 in retaliation for his belief that the Gottis had sought to murder his son as revenge for his betrayal and cooperation with the government. Sammy the Bull never faced charges related to his ploy to clip Junior Gotti.

Both Wershe and Junior Gotti, no longer at the helm of the Gambinos and pictured in this article’s featured image in an FBI mug shot from the early 1980s, have found themselves in the headlines again in recent weeks.

Wershe’s case is the focus of a series of in-depth investigative tv-news reports being done by Detroit’s NBC affiliate (WDIV Ch. 4) delving into his continued uphill battle to earn parole. He’s the only non-violent offender serving a life prison sentence in the entire Michigan Dept. of Corrections.

Gotti’s name is being bandied about due to the surfacing of a federal document that recounts a “proffer session” he had with members of the FBI and U.S. Attorney’s Office in 2005 where he divulged his, his father’s and other various mob associates’ participation in murder and police corruption, but never agreed to cooperate any further. The record of the meeting is part of a routine “302” form filled out by the government after meetings with potential informants and published in the new book “Gotti’s Rules” by NY Times Best-Selling Author George Anastasia.

The elder Gotti and Gravano teamed to power their way to the top of the New York mob using brute force, jointly arranging the unsanctioned murder of Gambino Godfather Paul Castellano in December 1985 and seizing control of the Borgata for themselves. Gotti went on to become the most celebrated mafia Don that America had seen since Al Capone and Gravano, his No. 2 in charge and No. 1 enforcer and hit man. After the pair were nabbed together in a massive RICO indictment in 1991, Gravano flipped and became the star witness in Gotti’s trial, entering the Federal Witness Protection Program.

That same year, Wershe entered the Program, too and they were placed side-by-side in

the same protection wing of a federal prison in Phoenix. Wershe, 21 then and a Detroit street-tough with a life sentence in front of him because of the harsh drug laws of the crack era, became acquainted with a number of notorious Italian mafia henchmen-turned-informants. He was cellmates with Philadelphia mob lieutenant Gino Milano and suitemates with Gravano, Philly LCN underboss “Crazy Phil” Leonetti and eventually Gravano’s fellow Gambino Goodfella “Mikey Scars” DiLeonardo.

“Rick was the best baseball player in the prison yard, he was just kid, I can’t believe he’s still in there,” said one of the high-profile prisoners in the Arizona witsec unit he was with back then.

While convicted killers Gravano, Milano, Leonetti and DiLeonardo were all released, Wershe, 17 at the time if his arrest and never collared for any acts of violence during his short, but meteoric reign in the Detroit drug trade, remains locked up with no guaranteed out-date.

Gravano, linked to nearly a dozen gangland homicides and maybe the most well-known mafia witness and refugee in American history, was released from prison after serving less than five years. Less than a decade later, he’d be back behind bars, arrested along with several members of his family, including his son Gerard (Baby Bull) Gravano and his daughter, reality tv star Karen Gravano (Mob Wives) for running a giant ecstasy distribution ring in Scottsdale, Arizona in the winter of 2000. Sammy the Bull won’t be paroled for another four years.

Junior Gotti, 50, is retired from the mob today – depending on who you ask having stepped down or been forced out. He survived four federal racketeering and murder trials in the mid-to-late 2000s, all ending in hung juries and recently self-published an EBook with author Peter Lance.

The FBI alleges Junior Gotti was boss of Gambino crime family from 1992 until the start of the New Millennium when they claim the reins passed to his uncle, Peter (One-Eyed Pete) Gotti. Right now, the Gambino syndicate is reputed to be headed by Domenico (Italian Dom) Cefalu.

Wershe, currently locked away in a state prison in northern Michigan, isn’t scheduled to see the parole board again for another two years. A recent U.S. Appellate Court ruling could get the board to review Wershe’s file sooner, as early as the next 90 days.

The name White Boy Rick dominated the news media cycle in Detroit for much of 1986, 1987 and into 1988, as the fearless and magnetic teenage drug lord transfixed the area with his ascent in the murderous Motor City underworld and the high-profile romance he was carrying on with the Mayor’s niece, a woman almost 10 years older than him and the wife of his gangland mentor, kingpin Johnny Curry.

Much like the Gotti’s in New York, White Boy Rick influenced pop culture in Michigan; Kid Rock, who spoke at Wershe’s 2003 parole hearing and name-checked him in a song, credits him with inspiring his on-stage persona at the start of his music career. Back in the 1990s and early 2000s, Kid Rock was known for wearing a mink coat, a Wershe trademark.

Rap superstar Eminem was in talks to portray him on the big screen in a follow-up to 8 Mile, his 2002 smash-hit movie (a semi-autobiographical take on his upbringing in Detroit that he starred in to rave reviews), but the project never got off the ground.

After his conviction on the now-defunct “650 lifer law” in January 1988, Wershe admitted he had been recruited into the narcotics industry fresh out of 8th grade by members of a federal task force and put to work on the government’s dime as an undercover mole for the next two years – allegations recently confirmed by numerous court documents and signed affidavits.

The next installment of NBC’s investigative series on Wershe’s case (Pt. 3 of a 5) will air Wednesday night. The series is being produced and hosted by WDIV Channel 4’s award-winning reporter Kevin Dietz. It premiered following the Super Bowl.