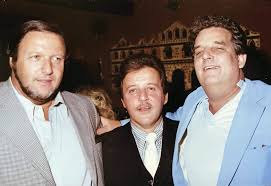 January 8, 2022 — Chicago mafia associate Herbert (Fat Herbie) Blitzstein was killed 25 years ago this week in his Las Vegas home in a poorly-executed attempted takeover of his set of independent rackets hatched in tandem by the Los Angles and Buffalo mafia crime families. The loud-dressing, behemoth-sized Blitzstein, 62, was shot to death on January 6, 1997, more than a decade removed from his gangster heyday in the desert as the bodyguard and right-hand man for Tony (The Ant) Spilotro, the Chicago Outfit’s man on the Vegas Strip.

Fat Herbie was also an original member of Spilotro’s infamous Hole in the Wall Gang and had a character based on him appear in the acclaimed movie Casino. Spilotro and Blitzstein came up together in the Windy City underworld of the 1950s and 60s. They were prime suspects in the 1967 slaying of Chicago racketeer Arthur (Boodie) Cowan.

When Spilotro was dispatched to Las Vegas to look after the Outfit’s interests in the Las Vegas casino and hotel industry, he brought Fat Herbie with him. Blitzstein owned the Spilotro crew’d headquarters, a jewelry store called the Gold Rush on West Sahara Avenue, which acted as fencing hub for stolen goods emanating from all across the west coast.

Spilotro was a person of interest for law enforcement in Nevada and Illinois in literally dozens of gangland slayings through the years. The hot-tempered Tony the Ant was beaten and strangled to death in a suburban Chicago basement June 1986 for getting drunk on power in Las Vegas.

The following year, Blitzstein was convicted of credit-card fraud, receiving stolen property and tax evasion. He did five years in federal prison and was released in the summer of 1992. Returning to Nevada, he went back to his old ways. Using his Any Auto Repair Shop on Fremont Avenue as his base of operations, a noticeably slimmed-down Fat Herbie began bookmaking, loansharking and running a female-escort service and insurance scams without paying protection to any of the mob factions represented in the area.

In the fall of 1996, the mafia families in L.A. and Buffalo joined forces for a hostile takeover of Blitzstein’s rackets. L.A. mob underboss Carmen (Flipper) Milano was stationed in Las Vegas at that time, running a crew out of the Sea Breeze Social Club. The Buffalo mob’s interests in Sin City during the late 1990s were looked after by Magaddino clan captain Robert (Bobby Snowball) Panaro. Buffalo-born L.A. mob soldier Stephen (Stevie the Whale) Cino acted as liaison between the pair of crime syndicates.

According to court files and FBI records, “Flipper” Milano farmed out the task of the Blitzstein job to L.A. mob associate Peter (Cookie) Caruso, another New York transplant to the “left coast,” who hired a hit team for $10,000. Whether Milano knew of Caruso’s plan to murder Blitzstein for his rackets remains up for debate. Recruiting the co-owner of Fat Herbie’s auto shop, Joe DeLuca, who knew the pass codes for Blitzstein’s home-security system, the conspirators, a hodgepodge of California and Buffalo wiseguys numbering a half-dozen, met on several occasions at restaurants and coffee shops around Las Vegas over the next few months to discuss their plans to assume control of Blitzstein’s vast portfolio of rackets for themselves.

Blitzstein returned from a vacation to Mexico on January 3, 1997. He’d be dead three days later.

On the afternoon of January 6, with Fat Herbie away at work, using the access codes provided by DeLuca, “Cookie” Caruso and another L.A. mob associate Anthony Delulio broke into Blitzstein’s house, robbed it of all its valuables – including, dozens of uncut diamonds, a box full of Rolex and Cartier watches, bricks of gold bullion and more than, $100,000 in cash – and departed leaving the side door open for the two assassins he had hired, Antonio Davi

When Blitzstein arrived home at around 6:00 pm, he was shot dead by Davi and Friedman, left sitting lifeless in his white-leather recliner with two bullet wounds to the back of the head and one to the face. Before Friedman pumped a kill shot into his victim’s head, Fat Herbie sheepishly asked “Why me?”

He never got an answer.

“Herbie was one-of-a-kind, intimidating and go-lucky at the same time,” remembers retired FBI agent Herm Groman, one of the undercover agents inside the Milano camp in the 1990s. “He assumed that his reputation and standing in the Spilotro days still meant something after he got out of prison. It got him up and running out of jail, but couldn’t sustain him. The second he was murdered it was all hands on deck from the Bureau’s perspective. Our entire focus shifted to solving the Blitzstein homicide.”

The Fat Herbie hit was doomed from the start for the perpetrators. Flipper Milano’s crew already had two undercover FBI agents installed in it and Milano’s driver and bodyguard, Johnny Branco, was a confidential federal informant wearing a wire. Branco had been promised by Milano induction into the L.A. mafia at the crime family’s next making ceremony.

What had begun as Operation Thin Crust, a racketeering probe into L.A.’s Las Vegas branch, morphed into Operation Button Down, a murder and racketeering investigation aimed at solving the Blitzstein homicide. There were mixed results.

Joe DeLuca was the first to flip. In July 1997, he pled guilty to murder conspiracy charges and was sentenced to 12 years in prison. The rest of the brood was indicted in 1998. Milano agreed to cooperate initially and then backed out of his deal. He ended up doing just under five years behind bars after pleading guilty to racketeering counts and died of natural causes in 2006 at 76.

Cookie Caruso died of a heart attack at 59 years old in January 1999, having pled not guilty and awaiting trial. Caruso’s captain in the L.A. Family, Louis (Little Louie C) Caruso – no relation – and Delulio pled guilty to the burglary of Blitzstein’s residence, Friedman copped to being paid to kill Fat Herbie and Buffalo mobster Al (Mops) Mauriello pled guilty to being the middle man in the murder conspiracy, delivering the 10k and instructions from Cookie Caruso to Davi and Friedman.

Bobby Panaro and Stevie Cino were acquitted of murder at an April 1999 trial, but found guilty of racketeering in their attempt to extort Fat Herbie. Panaro, 80, did five years in prison. Released in 2004, according to FBI and DEA informant records, Bobby Snowball has been an alleged administrator in the Buffalo mafia for the past decade and a half.

The Fat Herbie character in the movie was a composite of Blitzstein and fellow Spilotro crew member, Frank (Frankie Blue) Bluestein, who as shown on screen, was shot dead in his driveway after policemen mistook his submarine sandwich for a weapon. Bret McCormick portrayed the “Bernie Blue” character.