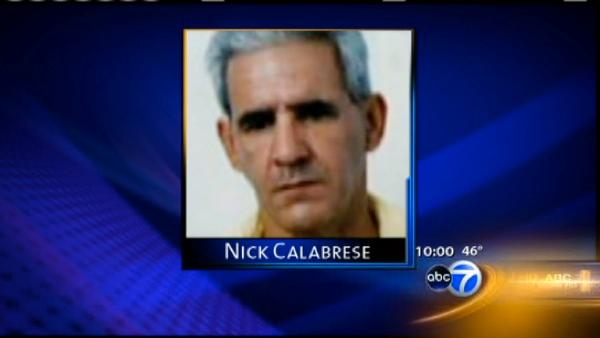 Infamous Chicago mob turncoat Nicholas (Nicky Slim) Calabrese, the only “made” member of the Outfit to ever testify in court against the crime family, is out of prison and according to multiple first-hand accounts, has been seen on more than one occasion back visiting in the Windy City.

It’s unclear exactly why Calabrese was in town. Per these accounts, the 72-year old Nicky Slim wasn’t trying that hard to keep a low profile though, returning to several of his one-time favorite local haunts and reuniting with some old friends from childhood for drinks at area watering holes.

Calabrese’s cooperation with the government led to the landmark Operation Family Secrets case – a 2005 indictment, nailing 14 Chicago mobsters for 18 different gangland homicides and his subsequent testimony at the 2007 trial, which brought down his big brother and mob mentor Frank (Frankie Breeze) Calabrese, as well as the Outfit’s acting boss, James (Jimmy the Man) Marcello and consigliere Joseph (Joey the Clown) Lombardo.

Nicky Slim was released from prison in 2012 and is in the Witness Protection Program. He had been behind bars since 1997, originally on a straight racketeering conviction. According to his testimony, Calabrese carried out numerous murders on behalf of the mob between the early 1970s and into the late 1980s.

The highly-publicized Family Secrets legal assault solved the notoriously grisly 1986 double homicide of Chicago mafia Las Vegas crew leader Tony (the Ant) Spilotro and his younger brother, Michael. The pair were heinously beaten, stomped and strangled to death in a southside basement by Nick Calabrese and others for the Ant’s rogue behavior in Vegas.

The Calabrese boys spawned from the Outfit’s rugged southside regime, known on the street as the Chinatown or 26th Street Crew, and long overseen by the Caruso and La Pietra factions of the Family dating back more than a half-century. Frankie Breeze and Nicky Slim came up in the mafia under southside capo Angelo (the Hook) La Pietra, the successor to Frank (Skids) Caruso. Frank (Toots) Caruso, Jr., Skids’ son, is alleged to be the current mob captain of the Chinatown neighborhood.

The breaking of the Family Secrets case took close to 20 years and can be directly traced to a misstep by Nick Calabrese during a “follow-up murder” to the Spilotro brothers hits. Three months after Tony and Michael Spilotro were slain in the suburban basement of Outfit soldier Louis (Louie the Mooch) Eboli in June 1986 in a vicious display staged in front of most of the syndicate’s sitting administration, Frankie Breeze and Nicky Slim were assigned to clip fellow southsider mob soldier John (Big Stoop) Fecarotta, the man that botched coordinating the Spilotros’ burial – they were unearthed within days in a northwest Indiana cornfield – and angered his superiors in the mafia by being too loose lipped with his wife and girlfriends, even taking them on scouting missions for future murders.

In the process of killing Fecarotta on September 14, 1986, Nick Calabrese accidentally shot himself in the shoulder and dropped a blood-soaked glove on the ground near the hit site, a Chicago bingo hall. Investigators could never connect the glove to anybody until the spring of 1998 when Nicky Slim’s nephew, Frank Calabrese, Jr., Frankie Breeze’s son and a southside crew associate married to Angelo La Pietra’s niece, came forth to the FBI and offered to help the government build cases against his dad and uncle. All three were serving time on a 1997 RICO conviction related to extortion and loansharking.

While debriefing for the FBI, Calabrese, Jr. told the feds the story about his dad and uncle and their misadventures murdering Big Stoop Fecarotta, how his uncle got shot and left one of his black leather gloves behind at the scene. The FBI, in turn, used the information and taped conversations with Frankie Breeze, in essence signing off on a hit on his own brother, to leverage Nicky Slim into becoming the first made member of the Chicago mafia to ever flip and join Team America.

Frank Calabrese, at one time in the 1980s and 90s arguably the biggest loanshark in Illinois, died of cancer in prison on Christmas Day 2012. He was 75.

Frankie Breeze and Nicky Slim were inducted into the mafia together in a 1983 making ceremony presided over by Outfit boss Joseph (Joey Doves) Aiuppa and syndicate elder statesman Alphonse (Al the Pizza Man) Tornebene. Aiuppa had long supported Tony Spilotro’s reign as “Don of the Las Vegas Strip,” but quickly soured upon being federally indicted in 1985 in a casino skimming case that many in the mob blamed on the incessant heat the Ant was bringing down on them with his volatile and in-your-face ways. Before heading off to prison in January 1986, Aiuppa signed off on Spilotro’s murder.

The tale of the flashy and ferocious Tony the Ant was brought to the movie screen a decade after his death, depicted in the 1995 film Casino, with Oscar-winner Joe Pesci portraying Spilotro.