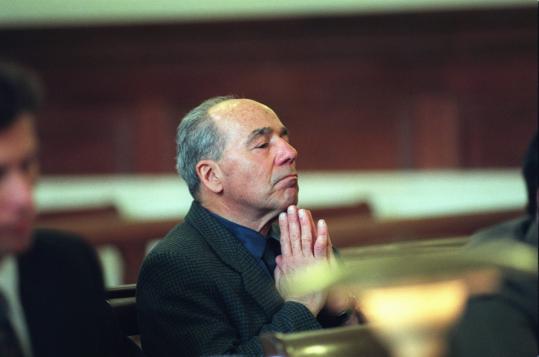 A tension-filled gangland beef between current New England mob acting boss Anthony (Spucky) Spagnolo and the Boston mafia street duo of Frederick (Freddy the Neighbor) Simone and Vincent (Dee Dee) Gioacchini a decade and a half ago was squashed just at the brink of violence by retired Patriarca crime family don Luigi (Baby Shacks) Manocchio, per law enforcement records.

Manocchio was released this week from almost five years spent in prison on a federal racketeering conviction stemming from the shakedown of strips clubs in the former Godfather’s home base of Rhode Island. The 87-year old Baby Shacks is alleged to have stepped down as boss of the New England mob in 2009 and passed the reins of the organization to Peter (the Crazy Horse) Limone. Manocchio was arrested living in Florida in 2011.

Spagnolo, 71, was indicted back in the fall for extortion and is out on bail awaiting trial. According to the FBI, he took over as acting boss of the crime family from Anthony (the Little Cheese) DiNunzio in 2012, when DiNunzio was jailed on yet another extortion case. His name has been tied to two notorious Boston mob slayings: state police documents name Spucky the getaway driver in the 1976 murder of infamous Patriarca era hit man-turned-witness for the government Joe (the Animal) Barboza while Barboza was living in hiding in San Francisco and federal court filings link the 1985 murder of rogue North End mafia associate Jimmy Limoli to the fact that Limoli stole a large amount of drugs that had belonged to Spagnolo and drew the ire of the syndicate’s administration.

Rising through the ranks of the mafia practically side-by-side in the Patriarca clan’s East Boston crew, Spagnolo began tangling with Simone and Gioacchini in the late 1990s over Simone and Gioacchini poaching two bookies who had been paying Spagnolo protection money. The increasing hostility reached a crescendo in the fall of 2000 and lasted into the holiday season prior to Baby Shacks interjecting and getting things sorted out peacefully.

Court-authorized audio surveillance caught Spagnolo threatening to kill Simone and Gioacchini and harm their families if they didn’t back off – Spucky was their captain at that point. That same FBI bug intercepted conversations between Simone and Gioacchini readying themselves for war, claiming they would kill Spagnolo if he indeed laid a hand on their wives or children and speculating Spagnolo’s “play” was being backed and sanctioned by then-syndicate underboss Alexander (Sonny Boy) Rizzo.

Rizzo, currently deceased, and Simone, 65, were both convicted for conspiracy to commit murder related to the 1981 mob slaying of Angelo Patrizzi and served over a decade in prison apiece. Patrizzi blamed Simone for killing his half-brother and publically feuded with the Family’s No. 2 in charge, Jerry Angiulo in an effort to get permission to exact revenge. Angiulo (the Patriarca Borgata’s underboss from the 1960s into the mid-1980s), ordered Patrizzi hit instead.

Simone and Spagnolo were arrested together for assault and illegal firearm possession in the 1970s when they were pulled over by police after beating up a suburban Boston tavern owner who was refusing to pay a street tax and the cops found three guns in the car they were driving in. The 62-year old Gioacchini and Spagnolo were busted together in 1990 after an undercover FBI agent infiltrated their crew, which was headed by Biagio DiGiacomo and operated out DiGiacomo’s restaurant, called, The Roma, in East Boston.

Any affinity they held for each other due to coming up together in the mafia was a faint memory by Thanksgiving 2000 when emotions started to boil over in the dispute pitting Spagnolo against his former friends and fellow crew members from the Roma.

To resolve the simmering ill will, according to court documents, Rhode Island-based captain Matthew (Good Looking Matty) Guglielmetti offered to step in and broker a sit down in the week after Thanksgiving. He traveled to Boston and brought the two parties to a table at a Beantown social club to iron out their differences, but they couldn’t find any middle ground.

Per a federal wiretap, Simone and Gioacchini had previously discussed murdering Guglielmetti because they thought he was trying to draw them out into the open to be killed on behalf of Spagnolo. Good-Looking Matty just got out from behind bars last year, following serving almost a decade on charges of “protecting” cocaine shipments.

In early December, with Guglielmetti’s orchestrated sitdown failing to have worked, Simone and Gioacchini reached out to the Genovese crime family’s capo overseeing Massachusetts, Adolfo (Big Al) Bruno from Springfield, to intercede. They used local wiseguy Joseph (Joe the Horse) Salvati as their conduit to Bruno in the western part of the state.

Salvati had recently been released from more than 30 years in the clink after being wrongly convicted alongside Peter Limone in the 1965 murder of Teddy Deegan and was heard on a wiretap arranging for Bruno to meet with Simone and Gioacchini. Just like what happened with Guglielmetti, Bruno’s attempt at mediating the dispute was unsuccessful. Bruno was murdered almost exactly three years later in late November 2003 in a power play by his protégé Anthony (Bingy) Arillotta.

Baby Shacks Manocchio and his then-consigliere Rocco (Shaky) Argenti wound up putting the conflict to bed with a final sit down held in Providence in the days before Christmas 2000, where Simone and Gioacchini agreed to lay off Spagnolo’s two bookies in exchange for bar and restaurant tribute and video-poker collection routes, according to FBI records regarding Argenti .

Spagnolo and Gioacchini were nailed in a extortion case branching from the 2000 audio surveillance. Both are out of prison now. Federal authorities label Simone, released in 2009, as the captain of the crew Spagnolo led before he was promoted to acting boss three years ago.