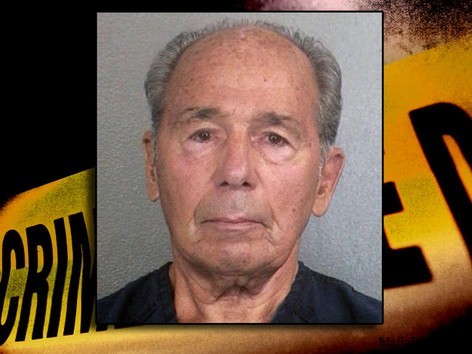 Former New England mafia boss Luigi (Baby Shacks) Manocchio is out of prison, checked into in a halfway house located in Massachusetts and currently residing on home confinement in Rhode Island. The notoriously understated and stealthy 87-year old Manocchio, who allegedly relinquished the reins of the Patriarca crime family in 2009, was released from a federal prison in North Carolina this week after serving more than four years on a racketeering and extortion conviction for shaking down Providence area strip clubs.

According to court records, Manocchio took over the New England mafia in 1996, assuming the mantle of leadership from the flamboyant Francis (Cadillac Frank) Salemme (imprisoned in 1995) and moving the syndicate’s powerbase back to Rhode Island for the first time since the original Raymond Patriarca era.

Boasting a lengthy criminal record that dates back to the 1940s, Manocchio was indicted with Patriarca for the murders of local Providence gangland figures Rudy Marfeo and Anthony Melei in 1969, eventually pleading guilty to lesser charges in the case and doing three years in prison – this followed Baby Shacks’ decade on the run from the law, hiding out in Europe and New York before finally turning himself in by mid1979.

Manocchio was promoted to a capo seat once he was released in the 1980s, per federal law enforcement files and kept a headquarters in Providence’s Federal Hill “Little Italy” neighborhood at Addie’s Laundromat until he left Rhode Island for Florida in the late 2000s.

Around Thanksgiving 2009, according to these files, he held a meeting in a Boston restaurant and gave up his position as boss to his consigliere Peter (the Crazy Horse) Limone so that he could spend the rest of his golden years away from rackets down in the Florida sun. The FBI arrested Manocchio in Florida in 2011 after he was named as the lead defendant in his strip-club shakedown case.

L.L. Cool J portrayed east coast drug lord Darryl (God) Whiting in the 1999 film “In Too Deep.” Well, as of last week, it appears the real-life Whiting will be getting a Hollywood ending to his story, an opportunity for a second chance on the outside against all odds.

Due to newly-enacted federal sentencing guidelines, the former Boston cocaine baron from the late 1980s will be getting an apparent reprieve from his life sentence and could be freed as early as two years from now.

In a court filing last week, the U.S. Attorney’s Office supported his release in 2017, which will be 26 years removed from the New York-born Whiting becoming the first person in Massachusetts’ history to be sentenced to life in prison without the possibility of parole for a drug crime.

Fleeing trouble in his hometown of Queens, “God” Whiting arrived in Boston in 1986 and quickly took control of the crack trade in the Orchard Park Housing Projects, located in the hardscrabble urban center of Roxbury. Importing a crew of close to 100 loyal foot soldiers spawning from the Empire State, he won a war for territory against the Intervale Street Posse (ISP) and established an intricate network of distribution and money washing that was, at least for a short time, difficult for the feds to combat. His gang was called the “New York Boys” and they wreaked havoc on the community, flooding the streets with rock cocaine and evoking fear in everyone who crossed their path.

At their peak in 1988, 1989 and 1990, Whiting and his New York Boys narcotics organization were pumping out millions of dollars a year in cash profits. In November 1987, Whiting opened up the Crown Social Hall in the heart of the Orchard Park projects. For all intents and purposes, the “Crown” became a drug emporium masquerading as a community center, and Whiting made it his headquarters. His second-in-charge was Edwin (Freedom) Carmichael and his main enforcer was Kenny (Cheyenne) Bartlett, who went on to become one of the most feared hit men in Boston gangland history. They got 20-year and 30-year sentences, respectively.

Per court documents and testimony by federal agents at his sentencing hearing, Whiting ordered at least two murders in his reign atop the Beantown underworld – A 1990 killing of a rival drug dealer and a 1988 slaying of a one-time close friend and lieutenant in his organization in what was described by the government as an “internal housecleaning measure.”

The New York Boys’ Boston crack kingdom came crumbling down to the ground in December 1990 with the dropping of a titanic federal racketeering and drug indictment that included him and his entire organization. The case was made by the undercover work of a pair of DEA agents, Jeff Coy and Maurice Hawkins and became so large it had to be broken up into three separate trials. The onslaught of forthcoming convictions, tipping off at Whiting’s July 1991 trial, hinged on Coy’s and Hawkins’ testimony.

Coy infiltrated Whiting’s inner-circle, Hawkins got in tight with a Whiting crew leader and his No. 2 strong-arm Steve (Mad Muhammad) Wadlington. Coy struggled to acclimate to life after “lifting out” of his undercover persona, reportedly battling drug addiction and PTSD and finally committing suicide in 1994. Prior to his death, Coy taped a confessional for the DEA to show to all undercover-officer trainees and warn them of the unique side effects of the heavily stressful and extremely dangerous job of being a government mole.

After Coy’s suicide, the video-taped confessional made its way into the hands of a Hollywood producer and became the basis for the movie In Too Deep, starring rapper-turned-actor L.L. Cool J as God and Omar Epps as Jeff Coy (switched to Jeff Cole in the script), with the setting changed from Boston to Cincinnati and supporting performances by Stanley Tucci, Nia Long and Pam Grier.