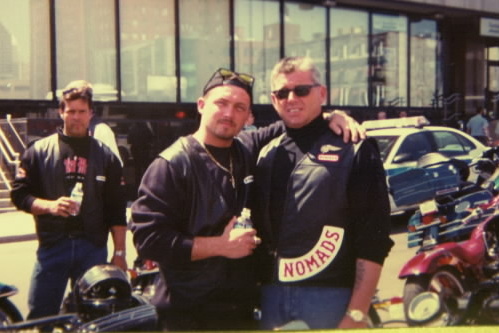 July 12, 2022 — Mammoth Montreal biker boss Maurice (Mom) Boucher died of throat cancer this week in a prison hospital. The 69-year old Boucher was one of the most notorious and lethal criminal figures in the history of Canada, heading the Quebec faction of the Hells Angels Motorcycle Club for two decades. He passed away while serving three life prison sentences for murders and attempted murders he ordered in the Great Quebec Biker War of the 1990s and early 2000s. Two of the murders were of prison guards.

“Mom Boucher was God-like in underworld circles in Canada,” said Hells Angels-affiliate turncoat Serge Boutin. “Everyone either admired him, was scared shitless by him or both.”

When he beat a double-homicide case at trial in November 1998, Boucher’s reputation as a gangland deity was only enhanced and amplified.

“He became a folk hero after his 1998 murder trial, people literally cheered him in the streets and at sporting events and music concerts,” Boutin said.

Boucher maintained invaluable ties to the Montreal Mafia and was particularly close to Vito Rizzuto, the face of the Italian mob in Canada until his death of an aggressive form of cancer in 2013. According to court records, in 2002, Rizzuto brokered an end to the bloody biker war Boucher had ignited. During his incarceration the past 22 years, Boucher sought to carry out killings of Rizzuto rivals behind bars, per these

Before joining the Oakland, California-based Hells Angels and establishing the brand as a powerhouse across the border in Canada, Boucher belonged to a biker club and white-nationalist group known as “The SS.” In 1986, Boucher’s one-time friends and fellow SS shot callers, the Cazzetta brothers (Salvatore and Giovanni), broke off from the Hells Angels and started the Rock Machine Motorcycle Club.

Boucher was “patched in” to the Hells Angels in May 1987, according to Quebec police informant documents. The following year in 1988, Boucher got promoted to president of the Quebec province for the club. He began expanding the Hells Angels across Canada by absorbing smaller clubs and creating puppet clubs to do his bidding. In the 1990s, he started the Nomads chapter which became his personal army.

Upon Salvatore Cazzetta’s imprisonment on cocaine-trafficking charges in 1994, Boucher declared war on Cazzetta’s Rock Machine in a carnage-strewn feud that would last the next 8 years and leave dozens of bodies in its wake. The July 1994 murder of a Rock Machine lieutenant in a motorcycle repair shop sparked the conflict.

Boucher was taken off the streets in 2000 and found guilty at a 2002 trial. He would have been eligible for day parole in three years if he had beaten his cancer diagnosis.