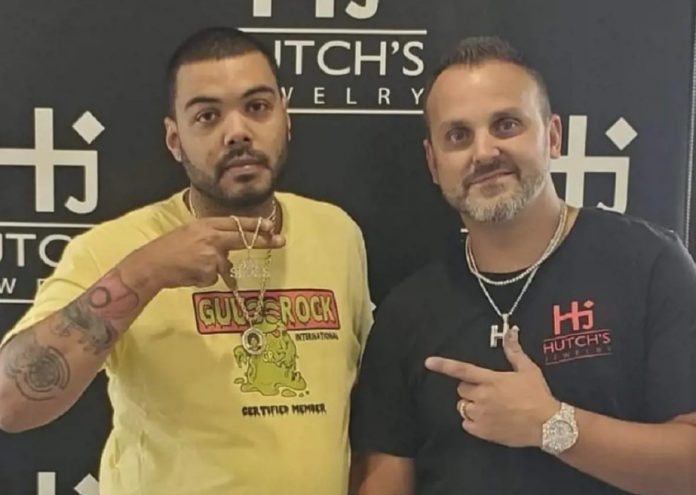 Roy Larry, 44, has pleaded not guilty in the case that shocked Metro Detroit and sent reverberations across hip-hop and rap circles around the country. On Monday, Ann Arbor attorney Trovious Starr took over Larry’s defense from a court-appointed counsel and had a second motion for Larry’s bond denied by Appell. The next motion hearing scheduled for the case is for the morning of September 6. Larry is a resident of Detroit’s far Eastside.

The 47-year old Hutchinsion lost his life in a hail of bullets behind the wheel of his GMC Denali luxury SUV on June 3 as he pulled out of a parking spot at a pawn shop he had just purchased on Greenfield Road down the street from his highly-successful Hutch’s Jewlery store. Over the three decades, Hutch’s Jewelers became known for outfitting Detroit’s rich and famous — most prominently, the area’s rapper and athlete crowd — in customed-made diamond-studded chains, ring, bracelets and pendants.

The business was started by Hutchinson’s parents at Northland Mall in 1990. In more recent times, a number of out-of-state celebrities became dedicated customers of Hutch the Jeweler’s and often showed off his custom-made pieces on their social media accounts. Best-selling Miami rapper Rick Ross is one of the jewelry store’s most loyal patrons.

Larry was arrested less than an hour after Hutchinson was pronounced dead at Providence Hospital in Southfield in the early afternoon hours of June 3. Oak Park police officers apprehended him near the scene of the slaying. Two days later, Larry was charged with first-degree murder and illegal firearm possessio

Police and prosecutors claim Larry is the only culprit in the crime. Multiple eyewitnesses to Hutchinson’s murder dispute this narrative and exclusively told Deadline Detroit last month that Larry wasn’t the shooter in the killing. The shooter, they say, is a younger, lighter-skinned man who shot Hutchinson’s from a bicycle. One of the eyewitnesses says they saw Larry sitting inside a vehicle in the pawn shop parking lot at the time of Hutchinson’s murder. Another eyewitness says the man on the bicycle was ran over by a car trying to flee the scene and transported to the hospital. It is unclear who the man on the bicycle and what status, if any, he currently plays in the investigation.

Hutchinson’s killing was a “contract hit,” per Oak Park police detectives at a May press conference. Authorities have yet to declare a motive for the murder.

According to court records in Ohio, Larry was arrested for making a hand-to-hand crack-cocaine deal with an undercover policeman in Richland County in 2008, found guilty at trial the next year and did two years in state prison. Larry is said to go by the nicknames “Mookie” and “Precious,” per sources and court filings.

Three separate sources tell Deadline Detroit that Hutchinson’s murder might be tied to rumors floating around the streets of Southeast Michigan during the winter that DEA and IRS agents were pressing local jewelry store owners, including Hutchinson, to give them information on narcotics traffickers laundering money through jewelry transactions. Two additional sources speculate the murder may have something to do with Hutchinson’s purchase of the pawn shop he was killed on the property of.

Oak Park Police detectives and the DEA didn’t respond to calls for comment to this story.