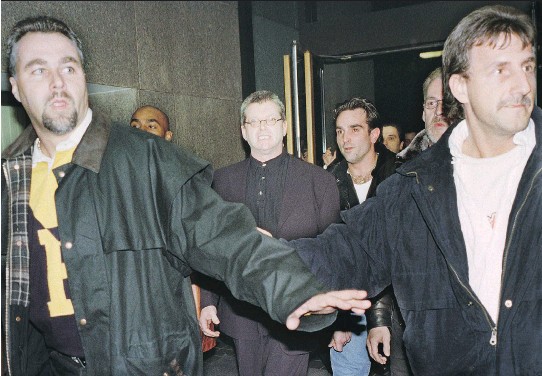 The Great Quebec Biker War ripped through Canada in the 1990s and early 2000s, claiming more than a dozen bodies when the Hells Angels MC and the Rock Machine MC clashed in a battle for drug, gambling, prostitution and extortion turf in Montreal and beyond.

The Hells Angels, the gold-standard for biker crews in America, landed in Montreal in 1977. The Canadian Godfather of the Hells Angels was Maurice (Mom) Boucher, an enigmatic and bloodthirsty mobster who gained folk legend status in Quebec at the peak of his volatile reign.

The Rock Machine Motorcycle Club was founded in 1985 by Salvatore Cazzetta, a one-time friend and ally of Boucher’s. When Cazzetta got locked up in 1994, the war erupted. It didn’t end for another eight years, racking up a catastrophic 125 gangland slayings and 80 bombings. Eventually, the Rock Machine was patched over to The Banditos MC, headquartered out of Houston, Texas.

October 19, 1994 – Montreal drug dealer Maurice Lavoi who changed allegiances from the Rock Machine to the Hells Angels is gunned down behind the wheel of his car.

October 28, 1994 – Sylvain Pelletier, the boss of a French-Canadian mob and drug crew aligned with the Rock Machine, is slain.

August 9, 1995 – Montreal drug dealer and Hells Angels affiliate Mark Dube is blown up in a car bomb outside the Hells Angels headquarters.

August 9, 1995 – Daniel Desrochers, an innocent 11-year old bystander, is killed by the shrapnel from the bomb used to kill Dube.

September 15, 1995 – Hells Angel member Richard (The Crow) Edmond is gunned down in the parking lot of a Montreal restaurant. He is the first “full patch” Hells Angels to fall in the war.

May 14, 1996 – Los Bravos MC boss David Boyko is killed by Hells Angels enforcer Donnie (Bam Bam) Magnussen in a fight at a Hells Angels party hosted by the Halifax chapter. The Los Bravos club was based in Winnipeg, an area of the country the Hells Angels were eager to assert its dominance, and was in talks about patching over.

March 28, 1997 – Rock Machine member Jean-Marc Caissy is gunned down as he enters a Montreal ice arena to play in a beer league hockey game.

June 26, 1997 – Prison guard Diane Lavigne is killed in a drive-by shooting on orders of Mom Boucher.

November 4, 1997 – Hells Angels renegades Scott (TNT) Steinert and Donnie (Bam Bam) Magnussen are found dead floating in the St. Lawrence River. They were last seen on their way to a sit down with Mom Boucher and were viciously beaten to death, dumped into

the river bound and badly battered.

December 7, 1997 – Hells Angels enforcer Andre (Toots) Tousignant is killed. Tousignant was the triggerman in the Diane Lavigne slaying and last seen on his way to meet Mom Boucher. His body was found on February 27, 1998 – he had been shot at point-blank range in the back of the head twice.

August 23, 1998 – Montreal Italian mobster Paolo Cotroni is killed in a drive-by shooting by Rock Machine gunmen in his driveway.

September 8, 1998 – Rock Machine co-founder Johnny Plescio is machine gunned to death inside his living room watching television by shooters standing on his back porch.

September 25, 1998 – Jean Rose, a member of the Dark Circle, a group of businessmen and professionals secretly funding the war for the Rock Machine, is shot to death behind the wheel of his car in his driveway.

October 22, 1998 – Dark Circle member Pierre Bastien is shot to death in his driveway in front of his 8-year old daughter.

April 2000 – Salvatore Gervasi, the son of Italian mob figure Paolo Gervasi, is shot to death and his body is left in a car parked in his dad’s driveway. Paolo Gervasi had thrown his support behind the Rock Machine and it angered the Rizzuto crime family, longtime allies of the Hells Angels. The elder Gervasi survived an assassination attempt shortly after his son was slain. He was eventually killed in the epic Montreal Mob War 14 years later.

April 17, 2000 – Hells Angels leader and Nomad “captain” Normand (Biff) Hamel is shot to death in the parking lot of a doctor’s office while taking his son to an appointment for a check-up. Hamel was the highest-ranking Hells Angel killed to date.

April 27, 2000 – Andre (Dede) Desjardins, a powerful racketeer and construction union boss aligned with Mom Boucher and the Hells Angels, is shot to death in the parking lot of Shawn’s, a popular Montreal restaurant.

August 29, 2000 – Drug wholesaler Raymond Craig, the Hells Angels point man with the Colombian cocaine cartels is killed in the resort town of St. Adele on a family vacation.