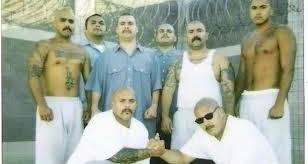 The long-awaited first-degree murder trial of Mexican Mafia leader Silvestre (Chikali) Rivera has begun in a U.S District Court in Denver. Rivera and co-defendant and fellow Hispanic gangbanger Richard (Chuco) Santiago are charged with the gruesome 2005 killing of 64-year old Mexican Mafia boss Manuel (Tati) Torrez, which took place while they were all incarcerated together in a federal super-maximum security prison in Florence, Colorado.

Torrez was one of the Mexican Mafia’s main “inside chiefs,” in charge of all organization activity conducted behind prison walls, the very place the syndicate, sometimes referred to as “La Eme,” (Spanish translation: ‘The M’), was founded in the late 1950s. He was suspected by some of “dry snitching” on a co-defendant in a racketeering and murder case from the 1990s and that’s considered one of the possible motives for the grisly hit.

Left alone with no guard supervision in the prison yard on the morning of April 21, 2005, Rivera and Santiago were videotaped brutally beating and stomping Torrez to death.Rivera has pled not guilty due to self-defense, his attorney claiming Torrez had let loose an assassin squad of imprisoned gang followers in the yard that day ten years ago this month with the intention of offing his client prior to the fatal attack taking place.

Torrez’s slaying was the first in the then-11 year history of the Florence facility (opened in 1994), a fact that future prosecution witnesses will testify made Rivera tremendously proud. Since the Torrez hit, there’s been one more murder within the confines of the prison (transpiring in 2008).

The notorious “SuperMax” in Florence, Colorado is reserved for only the nation’s most dangerous convicts and highest national security risks. Torrez was serving 13 years on a 1999 racketeering conviction and had been transferred there the year before his killing for the fact that he was caught running gang affairs at Mexican Mafia-stronghold Lompoc Federal Prison in California. Rivera, an emerging power in the gang himself, was serving time for bank robbery when the murder occurred.

If convicted in his current case, Rivera faces a life sentence. Santiago, being tried separately, is staring at the death penalty since he was already locked up on a homicide. Jury selection ended on Monday afternoon, opening arguments were completed Tuesday and the first witness (a former corrections officer-unit manager at the Florence SuperMax) was called Wednesday morning. Prosecutors showed jurors the video of the murder as part of their opening statement.

Pending portions of the trial will take on a distinct flavor of a real-life version of the movie Con Air, as a series of infamous and incredibly-feared prison gang leaders representing Chicano, Aryan Brotherhood and African-American factions have been subpoenaed to testify and will be flown into town to take the stand under heavy guard. Con Air was an action film in 1997 starring Nicolas Cage, John Cusack, John Malkovich and Dave Chappelle and about an airplane full of shackled misfit convicts from different backgrounds joining forces to hijack the flight they are being transported on.