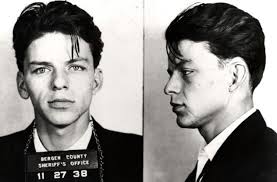 In honor of what would be Frank Sinatra’s 100th birthday this year, HBO unveiled a four-hour, two-part documentary film this week exploring the life and times of the iconic singer and entertainer. Sinatra, a well-known mob associate from his home base on the east coast dating back to his days growing up in New Jersey, was often in the company of mafia dignitaries when he came to the Midwest as well.

“The Chairman of the Board” famously cavorted in Chicago with Outfit mob boss Sam Giancana and palled around with the less nationally-known, yet equally infamous and treacherous Giacalone brothers in Detroit.

FBI surveillance logs note Sinatra’s presence at Giancana’s headquarters, the Armory Lounge and his restaurant the Villa Venice while visiting the Windy City. He was also close to Rocco and Charles (Trigger-Happy Charlie) Fischetti, a pair of brothers and cousins to Chicago Prohibition Era don Al (Scarface) Capone who rose to prominence in the Outfit hierarchy, first at Capone’s side and then on their own after Capone’s jailing in the 1930s. One particular FBI file pertaining to Sinatra tells of ‘Ole Blue Eyes’ accompanying the Fischetti brothers and Chicago mafia boss Tony (the Big Tuna) Accardo to a meeting of mob higher-ups in Cuba in 1946.

Sinatra and his Rat Pack played a week-long run at the Villa Venice in 1962 as a favor to Giancana, and according to some underworld rumors, to assuage tensions between him and the Chitown Godfather due to the Kennedy Administration’s sudden and aggressive declared war on American organized crime.

Just two years prior, Sinatra, and some believe powers in the mafia, helped get John F. Kennedy elected President of the United States. Sinatra, one of the most recognized pop-culture figures in the world and an ardent JFK friend and supporter, campaigned vigorously for Kennedy in the 1960 election and his buddy Giancana is alleged to have spearheaded an effort by the mob to fix voting districts in one of the closest Presidential Elections in history in which Kennedy edged past future President and then-Vice President Richard M. Nixon.

Almost immediately after taking office in early 1961, Kennedy unleashed his brother and new Attorney General, Robert F. Kennedy on a heated rampage against Giancana and his fellow mafia leaders around the country, almost quadrupling the number of federal indictments levied against members of organized crime. Most historians point to Sinatra as the man that introduced and tied the mob into the Kennedy camp – at least partially through arranging a purposely-constructed love triangle between a former girlfriend of his named Judith Campbell, JFK and Giancana.

Per FBI documents related to the Giacalones, the trio would often hold court at the historic Roma Café in Detroit’s Eastern Market (one of the oldest eateries in the city) and then as the years went on also at the Excalibur, a popular restaurant and lounge in suburban Southfield less than a five minute drive from Tony Jack’s nearby headquarters, the Southfield Athletic Club. Sinatra often performed at local reputedly mob-connected establishments in Metro Detroit, like Pine Knob in Oakland County and the Premier Center in Macomb County.

“It was like clock work,” recalled retired Detroit FBI agent Sam Ruffino, a central OC unit member in southeast Michigan from the 1970s until the 2000s. “A few times a year, we’d trail the Giacalones to the airport to pick up Sinatra. They’d spend the weekend together socializing before and after his shows. We’d watch them post up at the Excalibur, entertain large groups of people from all walks of life. Billy would bring all the girls. Frank would have his pick. Almost every night, they’d shut the place down. And he didn’t make any apologies for it. Those were his friends. The fact that they were known hoodlums and murderers didn’t matter to him. He didn’t care, he was going to hang around with who he wanted to hang around with.”

Tony Giacalone died of cancer in 2001, Billy Giacalone of natural causes in the winter of 2012.  Accardo passed due to old age in 1992 and the Fischettis have been in the grave for over a half-century. Giancana was killed gangland style in 1975, just weeks prior to the disappearance and murder of Teamsters union boss Jimmy Hoffa, a globally-known mob hit and unsolved crime long linked to the Giacalones, Hoffa’s liaison in the Midwest Italian mafia.