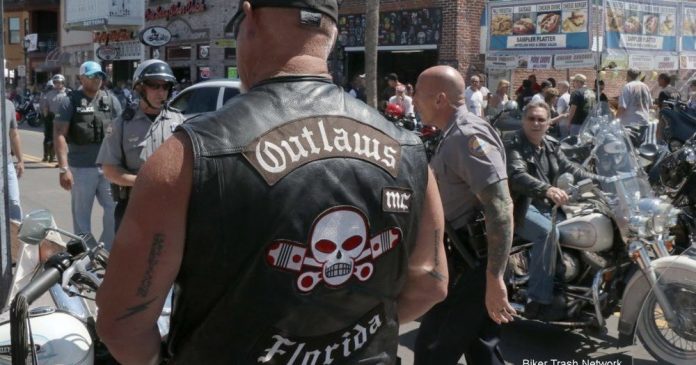 June 29, 2022 — The Outlaws Motorcycle Club is upping its recruitment efforts and making strategic alignments on the street with other biker gangs and re-establishing ties with various mob factions in the wake of The Pagan’s Motorcycle Club’s aggressive Blue Wave campaign to exert control in untapped territory around the country, per sources and internal DEA and ATF memos circulating in law enforcement in both the U.S. and Canada.

An uptick in violence between the two clubs has followed The Pagan’s expansion push. Three murders resulting from shootouts in Oklahoma and Tennessee, respectively, have occurred in the past year.<

According to one of the memos, The Outlaws are relying on support clubs (most prominently, the Black Pistons), previous strong relationships with the Italian mafia in cities like Chicago, Detroit and Buffalo and freshly-cemented connections to African-American street gangs with reach across multiple states, in their current dispute with The Pagan’s. Since launching the so-called “Blue Wave” in 2018, The Pagan’s have forged alliances with The Mongols Motorcycle Club and Hispanic crime groups to aid in their push to expand. The club has also dipped heavily into the Latino recruiting pool for new members.

The Outlaws are based out of Western New York these days, even though the club’s traditional powerbase has always been in the Midwest. The Pagans are a primarily East Coast and Southeast club attempting to expand up the eastern seaboard and out into the Southwest and West Coast.

Reputed Outlaws national president John (Tommy O) Ermin is the boss of the club’s Buffalo chapter and is allegedly linked closely to the city’s alleged mafia don Joeseph (Big Joe) Todaro, Jr. With the elevation of the 54-year old Ermin to the boss’ seat in recent years, it’s the first time in Outlaws club history that the “boss” isn’t from Chicago, Detroit, Indianapolis or Milwaukee.