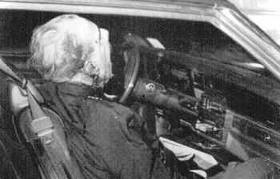 1 Angelo (The Docile Don) Bruno – The assassination of Bruno, the heavily-respected Philadelphia mob don and National Commission member on March 21, 1980 as he sat in a car outside his home, set off a near 15-year period of violence and instability in the suddenly-treacherous Philly underworld. Somewhat mislabeled The Docile Don – he was equally murderous as most of his mafia boss brethren around the country -, Bruno was killed personally by his consigliere Antonio (Tony Bananas) Caponigro, the back of his head literally blown off by Caponigro’s buckshot. Tony Bananas incorrectly thought he had received permission to pull the Palace coup from the Commission in New York and him and his co-conspirators all paid with their lives in the coming months. Caponigro and the others in the Family’s insurgent faction felt that Bruno was out-of-touch, greedy and unwilling to dive head-first into the then-new legalized gambling paradise that was Atlantic City.

2 John Avena – Philadelphia’s first modern-day, post-Prohibition Godfather, Avena was killed as he crossed the street at the corner Passyunk and Washington in heart of South Philly on August 17, 1936, the victim of a civil war that had broke out within the crime family, pitting him and his followers versus Joe Dovi, the man that took his place atop the syndicate for the next decade.

3 Phil (The Chicken Man) Testa – Angelo’s Bruno’s underboss and successor, Testa had a short-reign and was famously blown up by a nail bomb as he walked onto the porch of his house in the early-morning hours of March 15, 1981. The unauthorized mob hit was engineered by his consigliere Pete Casella and power-hungry capo Frank (Chickie) Narducci and led to his son and protégé, Salvie, a 25-year-old racketeer and bloodthirsty killer, going on a rampage, murdering everyone associated with his dad’s assassination. The Chicken Man’s killing would go on to be the opening line of New Jersey rocker Bruce Springstein’s song, Atlantic City, off his 1982 album, “Nebraska”.

4 Salvatore (Salvie) Testa – The ruggedly handsome Pennsylvania mob prince, the son of “Chicken Man” Testa, angered his father’s replacement, Little Nicky Scarfo with his growing popularity and power in the year’s after the Chicken Man’s slaying and was killed on September 14, 1984, on Scarfo’s orders. Testa had sealed his fate by breaking off his engagement with Scarfo underboss Salvatore (Chuckie) Merlino’s daughter in the months leading up to his murder, something Scarfo used to sway sentiment against his perceived rival, somebody East Coast newspapers were projecting to be the city’s future don. The day he was killed, Testa was brought to a candy store in South Philly by his best friend and right-hand man Joey Pungitore, on the pretense that was going to settle a beef for Pungitore, but instead was shot in the back of the head by Scarfo hit man Salvatore (John Wayne) Grande.

5 (tie) The Aftermath Slayings – The murders of Philadelphia mob bosses Angelo Bruno and Phil Testa in the early 1980s, ignited a string of high-profile retaliation killings, starting with Tony Caponigro, his brother-in-law and lieutenant Freddy Salerno and capos John (Johnny Keys) Simone and Frank (The Barracuda) Sindone in the wake of the Bruno assassination and the slayings of Chickie Narducci and his driver Rocco Marinucci, the man that planted and detonated the bomb that killed Testa, in the months following the Chicken Man’s death.

5 (tie) Michael (Mikey Chang) Ciancaglini – One of the leaders of an ambitious and youthful rebel faction of the Philly mafia in the early 1990s, Mikey Chang spawned from a rich Pennsylvania gangster lineage and was shot dead with a single gun wound to the heart on August 5, 1993, as he left a local hangout with his best friend, fellow young renegade Mafiosi and future mob don, Joseph (Skinny Joey) Merlino. Skinny Joey, son of Nicky Scarfo’s one-time underboss, Chuckie Merlino and Mikey Chang, teamed with Angelo Bruno disciple, Ralph Natale, to challenge Scarfo’s successor, the Sicilian-born Godfather John Stanfa. The Ciancaglini family itself was caught smack dab in the middle of the violent conflict, with Mikey Chang siding with Merlino and Natale and his older brother Joey Chang siding with Stanfa, while their other brother Johnny Chang and their father “Chickie” Ciancaglini helplessly sitting the war out behind bars in prison. Mikey Chang was killed by Stanfa hit man John Veasey, shooting from a passing car driven by his Goombah buddy, Phil Coletti.

5 (tie) Edwin Helfant – A retired Municipal Court Judge under indictment for judicial misconduct, Helfant was brazenly killed inside Atlantic City’s Flamingo Motel lounge on the evening of February 15, 1978, as he sat having a drink with his wife in the crowded bar. Earlier in the decade Helfant pocketed a bribe he was supposed to pass on to a fellow sitting judge related to the murder case of Philadelphia mobster Nick (The Blade) Virgilio, a close friend of AC crew leader and future Philly mafia boss Little Nicky Scarfo. When Virgilio got out of prison, Scarfo gave him the okay to murder the corrupt gavel-wielder, even acting as the getaway driver in the Cowboy-style slaying, which would go on to become a trademark in his reign leading the City of Brotherly Love’s mafia. Nick the Blade was sent back to prison on racketeering charges ten years later, where he would die in 1995 as a heart attack.