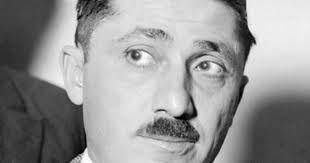 1 Frank (The Enforcer) Nitti – Al Capone’s first cousin and direct successor as mafia boss of Chicago, Nitti ended his own decade-long reign on March 19, 1943, by shooting himself in the head while drunk, walking in railway yard, under indictment and facing a stiff prison bit for extorting Hollywood movie studios. Nitti, the brains behind Scarface Capone’s brawn, was well-known to be claustrophobic, fearing the prospect of prison and some suspected he was terminally ill with cancer when he killed himself.

2 Carlo Licata – The son of L.A. mob boss Nick Licata and son-in-law of Detroit mob don William (Black Bill) Tocco, Licata was discovered dead inside his Michigan home, shot twice in the chest on July 30, 1981, the six-year anniversary of the Jimmy Hoffa disappearance and murder. Licata’s house, located in the posh Metro Detroit suburb of Bloomfield Hills, is suspected by the FBI as a possible location that Hoffa was taken to and executed – he was last seen in a restaurant parking lot less than five minutes away. Investigators raised their eyebrows at the fact that the gun he used was found more than 10 feet away from the body, resting neatly on a dresser, and the suspicious date it occurred on. Licata was having business problems and was reportedly on the outs with his brother-in-laws, then-Detroit mob don, Giacomo (Black Jack) Tocco and Motor City caporegime Anthony (Tony T) Tocco, at the time of his death.

3 Girolamo (Momo) Adamo – The longtime underboss of the L.A. mafia, Adamo shot his wife and then himself on June 18, 1956, after he was passed over for the syndicate’s boss’ chair following California don Jack Dragna dying of a heart attack and allegedly was forced to watch Frank DeSimone, the man who would go on to replace Dragna as the city’s Godfather, rape his wife in front of him.

4 Enrico Riccobene – A nephew of breakaway Philadelphia Mafia faction leader Harry (The Hunchback) Riccobene, at war in the early 1980s with the city’s reigning mob boss Nicodemo (Little Nicky) Scarfo, Enrico, killed himself on December 14, 1983 in a bizarre incident which saw him run for a gun and swallow a bullet in a South Philly jewelry store after being told that Scarfo lieutenants Philip (Crazy Phil) Leonetti and Lawrence (Yogi) Merlino were walking through the neighborhood.

5 (tie) Giovanni & Pietro Ligammari – The Bonanno drug lieutenant and his son were found hanging side-by-side inside their New Jersey home on May 21, 1999. Giovanni, 60, was convicted in the legendary Pizza Connection Case. Pietro, 37, was a civilian without a criminal record. Mental health experts questioned the miniscule likelihood of a father and son committing a planned double suicide. The elder Ligammari was just one of a string of untimely demises of mobsters tied to the fallout from Pizza Connection bust, most of them connected to the treacherous Bonanno Family.

5 (tie) Steve Raffa – The Tampa mafia’s capo in Miami, overseeing South Florida for all of the 1980s and 1990s on behalf of the Trafficante Family, Raffa hung himself inside his Pembrooke Pines home on November 16, 2000, less than a month removed from being pinched in a large-scale racketeering indictment. Raffa was reportedly severely depressed in the wake of his arrest, however, there are family members of his that remain weary of a firm designation of suicide regarding his death.