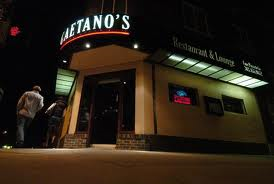 1 Joseph (Little Caesar) Roma – The city’s inaugural LCN mafia boss, Roma’s time at the helm of the Denver mob was short-lived and he was murdered inside his mansion on February 18, 1933. Roma’s enforcers, the ambitious and dangerous Smaldone brothers, future Godfather Eugene (Checkers) Smaldone and future underboss Clyde (Flip Flop) Smaldone, were the main suspects in the gangland slaying, seen leaving Roma’s residence minutes after his death. Checkers, Flip Flop and their baby brother Clarence (AKA Chauncey) ruled the Rocky Mountain rackets, in some form or another, for the rest of the 20th Century.

2 The Carlino Brothers Murders – Denver’s mafia leaders during the Prohibition Era, Pete and Sam Carlino were fixtures in the Colorado press and upper-crust social scene before both were killed in the same four months in 1931, the victims of a longstanding war with gangsters in nearby Pueblo. Sam was slain on May 7 1931, while Pete, known as the first real Mountainside mob don in the region’s history, was wacked in Pueblo on September 13, 1931. Prior to his own death, Pete Carlino had engineered the murders of his Pueblo-based adversaries, the four Danna brothers (John, Tony, Pete and Sam).

3 Giovanni (Baby John) Foderaro – The one-time protégé of early-1970s Denver mob don, Joseph (Scotty) Spinuzzi, Baby John couldn’t get along with Spinuzzi’s replacement, Checkers Smaldone and his brothers and was gruesomely stabbed to death 16 times, his throat slit inside his Pueblo headquarters, Gino’s Lounge, on November 24, 1980. Only 33 years old, Foderaro was out on bond when he was killed following a conviction for paying a pair of henchmen to assault a County Commissioner unwilling to yield to his demands.

4 John (Skip) La Guardia– The young and popular Denver mobster groomed personally by Checkers Smaldone – rising through the syndicate ranks as Smaldone’s driver and bodyguard -, was killed in front of his suburban Lakewood residence on July 20, 1973, when his mentor worried that he was trying to organize behind his back and could be planning a Palace coup. La Guardia, 30 and a former University of Colorado football player, was ambushed by gunmen hiding in his bushes after he had come home from the bar and restaurant he owned, The Alpine Inn. First, shot-gunned to the ground, he was then bludgeoned to death. Shortly before La Guardia was killed, he was thought to have orchestrated an attack on Checker’s gangster sister-in-law, where she landed in the hospital with gunshot wounds to her leg and shoulder. The assault on LaGuardia’s faction continued after he was in the ground and six months later in January 1974, Ralph (Ralphie Pizazz) Pizzalato, Skip La Guardia’s No. 1 lieutenant was found in his car in the Alpine Inn parking lot with a piano cord around his neck, shot in the back of the head, weeks removed from another attack on Pauline Smaldone (Checker’s brother Chauncey’s wife), which saw her and her daughter escape a house bomb.

5 (tie) The Gambling Murders – Local underworld figures Mike (Mikey Fats) Falbo and Harold (Murph) Cohen were both killed in the same year-period in the late 1940s, done away with after falling into gambling debt to the Denver mafia in a duo of homicides that were possibly connected and highlighted an effort by the crime family enforcement wing to consolidate rackets towards the end of the decade. Falbo’s badly-battered corpse was found December 4, 1948 on a farm in Welby, Colorado, hours after he lost a large chunk of cash at a nearby mob-controlled dice game. Cohen, a sometimes boxing promoter in the area with a reputation as a scam artist, disappeared on the November 7, 1949, discovered floating in the Blue River at the banks of the Coors Brewery plant. Investigators believed that Cohen might have had knowledge of the Falbo hit through a girlfriend he shared with a highly-placed member of the Denver mob.

5 (tie) Robin (Walkie Talkie) Roberts – A Smaldone brothers gambling lieutenant that owed money to the mob and was revealed to be a police informant, Roberts was found shot to death in a ditch on the side of a suburban Applewood Mesa road on August 7, 1963. Roberts status as a snitch was inadvertently leaked at a court proceeding and he reportedly pleaded with law enforcement for protection in the weeks leading up to his murder. The Smaldone brothers and their nephew and top lieutenant, Paul (Fat Paulie) Villano were considered by police the prime suspects in the slaying. Villano managed Gaetano’s Italian Restaurant in Denver, the eatery and longtime Colorado gangland hang-out owned by the Smaldones.