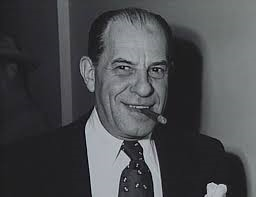 1 Gus Greenbaum – A well-known Jewish mob associate and racketeer, Greenbaum and his wife Bess were killed inside the bedroom of their Phoenix home, their throats slashed with a butcher’s knife on December 3, 1958. Greenbaum, a pivotal presence in the formation of the legendary Las Vegas casino skim and overseer of gangland interests in Nevada for the New York and Chicago mob families, was discovered decapitated after being caught stealing from the till to support an increasingly severe alcohol & drug problem.

2 Don Bolles – An Arizona investigative newspaper reporter that got on the bad side of the mafia, Bolles wound up blown to bits in a car bomb that detonated on the afternoon of June 13, 1976 in Phoenix’s Hotel Clarendon. Unrelenting in his pursuit of the mob in Arizona, he was called to the Clarendon to meet a supposed new source for a story he was working on. As Bolles’, 47, lied dying in the rubble of the blast that killed him, he uttered “Emprise,” to responding police and medics the name of a horse and dog-racing business linked to corruption between the Detroit and St. Louis mafia families’ hidden ownership in Las Vegas’ Frontier Casino and the subject of the piece he was writing for the Arizona Republic. Detroit mob underboss Peter (Horseface Pete) Licavoli lived in the Phoenix area at the time of Bolles slaying. John Adamson was convicted of making and planting the bomb that killed Bolles and told the authorities that he was hired by a man named Max Dunlap, someone connected to a mobbed-up liquor distribution company.

3 Willie Bioff – The Chicago-born Jewish mob enforcer that became a government witness in the 1940s and testified against several Windy City major mafia figures , including then-boss Frank (The Enforcer) Nitti, in a 1943 trial for shaking down Hollywood movie studios, Bioff was blown up in a car bomb attached to his pickup truck on November 4, 1955, while living in Phoenix under an assumed name. Bioff’s whereabouts were divulged to those seeking revenge for his betrayal after he began working for West Coast gambling and casino czar Gus Greenbaum, the New York and Chicago mafia’s man in Las Vegas for most of the 1950s, using the alias “Willie Nelson.”

4 Louis (Louie the Baker) Bombacino – A Chicago mobster that testified against a slew of Outfit administrators, including capos and eventual Outfit bosses Jack (Jackie the Lackey) Cerone and Joseph (Joe Nick) Ferriola as well as his gangland mentor Frank (Frankie the Knife) Aurelli, before relocating to Tempe, Arizona via the Witness Protection Program, Bombacino was killed by a car bomb as he pulled out of his driveway on the morning of October 6, 1975. At the time of his flipping, Louie the Baker, sponsored for membership into the mafia by Aurelli in a 1958 ceremony in Illinois, was considered one of the most significant underworld turncoats in the FBI’s war against the mob.

5 Emil (Little Mal) Vacci – Midwestern mafia associate and maître de at a Phoenix Italian eatery, Vaci was kidnapped from the parking lot after getting off work and slain on June 7, 1986, left in a nearby ditch with multiple bullets lodged in the back of his head. Little Mal was called in front of a federal grand jury investigating Chicago mob activity on the West Coast and Outfit bosses worried he was getting loose-lipped. Vaci’s murder was finally solved in the 2000s at the giant Family Secrets trial, with Chicago mob hit man-turned-informant Nick (Nicky Slim) Calabrese admitting and testifying to shooting Vaci in as they drove in a van on a busy Phoenix thoroughfare.