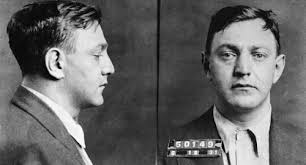 1 Arthur (Dutch Schultz) Flegenheimer – Angering the Italian mafia’s National Commission with his personal war against U.S. Prosecutor Thomas Dewey, a notoriously corrupt attorney that he planned to kill after spearheading a federal tax assault trying to jail him, the high-profile and legendarily lethal Jewish mob boss was killed along three of his men after they ate a late meal at the Palace Chop House in Newark, New Jersey on October 23, 1935. Murder Inc.-deployed hit men, Charles (Charlie the Bug) Workman and Emanuel (Mendy) Weiss were convicted as the gunmen in the bloody shooting that took the lives of Schultz, his accountant Otto Berman, his top enforcer Abe Landau and his bodyguard Bernard (Lulu) Rosencrantz. Schultz was initially shot in the chop house bathroom, before stumbling out to the dining room and sitting down at his table prior to succumbing to his wounds in a state of delirium at the hospital. Workman would be convicted in the slaying and served more than two decades behind bars. Weiss was sent to the electric chair for another murder he committed in 1944.

2 Arnold (The Brain) Rothstein – The world-famous Jewish mobster and gambling chief, Rothstein was killed over an unpaid debt from a fixed card game on November 5, 1928, dying from gunshot wounds sustained hours earlier while he attended a meeting at the Park Central Hotel in Manhattan. The Brain, nicknamed for his genius underworld acumen and his successful fixing of the 1919 World Series, lost over a quarter of a million dollars to New York Irish hoodlum and gambler George (The Hump) McManus in a card game he thought (most likely rightfully so) that was rigged and refused to pay. Supposed to meet McManus to try and resolve the beef at the Park Central Hotel that day, he was gunned down instead. McManus would be arrested and charged with Rothstein’s murder, however he was acquitted of the crime at trial.

3 (tie) Joe Amberg-Morris Kessler hits – Engaging in a bitter feud with Murder, Inc. leader Louis (Lepke) Buchalter, Amberg, a rival Jewish mob boss headquartered out of Brownsville in Brooklyn, and Kessler, his bodyguard, were ambushed on September 30, 1935 as they came to make a collection of extortion cash at a local auto garage. Lined up against the wall, they were executed with machine-gun fire following being cursed by their assassins. “Pretty Louie” Amberg, Joe’s brother, was slain only days prior. Although the notorious New York gangland double-homicide was never solved, it’s generally considered the first of literally dozens of professional hits carried out by Murder Inc., a personal assassin squad on-call for New York mafia statesman Albert Anastasia and overseen by Buchalter and his primary lieutenant, Jacob (Gurrah) Shapiro.

3 (tie) Abe (Kid Twist) Reles – The infamous Jewish hit man and flagship Murder Inc. enforcer shocked the East Coast underworld in 1940 and turned government witness, putting several of his gangland associates either behind bars or into the electric chair, before being killed himself on the morning of November 12, 1941, thrown out of the window of his FBI-guarded hotel room in Coney Island, hours prior to him being scheduled to testify in a grand jury investigating New York Italian mobster Albert Anastasia for the murder of renegade longshoremen Pete Pantos. After Reles’ suspicious demise (some believe he either jumped from the window intentionally as a suicide or an escape attempt), charges were never brought against Anstasia, who went on to become boss of what would eventually become the Gambino Crime Family.

4 Abraham (Bo) Weinberg – Dutch Schultz’s childhood chum and top street lieutenant, Weinberg left a Manhattan night club on September 9, 1935 and vanished. FBI documents allege he was killed personally by Schultz and his bodyguard Lulu Rosencrantz after Schultz caught wind of a plan by Weinberg to bump him off and seize control of his operation. Schultz bragged to his men that he had fitted his one-time most-trusted ally with “cement boots” and threw him in the East River. Less than two months later, Schultz himself was wacked gangland style in New Jersey.

5 The Collingwood Massacre – The highlight and downfall of the Purple Gang’s reign in Detroit, three insolent Purple soldiers were killed on September 16, 1931. In charge of the transportation of bootlegged liquor across the Detroit River from Canada to the U.S., the Purple’s self-proclaimed “Little Jewish Navy,” led by Joseph (Nigger Joe) Leibowitz, Harold (Hymie) Paul and Isadore (Izzy the Rat) Sutker, was trying to freelance and not cut the gang’s leaders, the Burnstein brothers (Jewish Godfather Abe and his three younger siblings, Ray, Joe and Izzy), in for a piece of the action. Called to a purported sit down at the Collingwood Manor Apartments by a mutual associate name Sol Levine, they were shot to death by Purple hit men Irving Milberg, Harry Keywell and Harry Fleisher, while Ray Burnstein waited outside in the car. Boyhood friends with many of the core Purples, Levine’s life was spared. Levine would soon be the state’s star witness at trial, where Milberg, Keywell and Burnstein were all convicted and slapped with stringent prison sentences. Without question the most famous Jewish mob organization in the history of the underworld, the Purples had trouble bouncing back from the incident and within years, the iconic crime syndicate would cease to exist, peacefully absorbed by the Motor City’s Italian mafia.