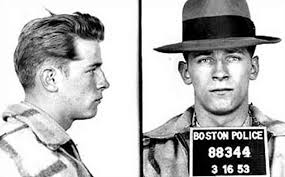 1 The Boston Irish Mob War – A decade plus-long conflict (with a five-year reprieve in the middle) fought for supremacy in Boston’s Irish underworld erupted in the early 1960s with the murder of Charlestown gang leader Bernie McClaughlin in October 1961 by rival James (Buddy) McLean of Somerville, the mentor of notorious Irishman mobster James (Whitey) Bulger and McClean’s eventual successor as kingpin of the Winter Hill Gang. McClean was killed by McClaughlin’s family a few years later. The entire war stemmed from a Labor Day ’61 fight between McLean’s friend Alex (Bobo) Petricone and McClaughlin’s brother George, who made an advance at Petricone’s girlfriend at a party and took a beating as a result, kicking off the dispute between the local gangland factions – Petricone left Boston at the early stages of the war and went to Hollywood, becoming Emmy Award-winning character actor Alex Rocco (“Moe Green” in The Godfather). Bulger was responsible for some of the latter-era war hits, such as the 1972 slaying of Donald Killeen, a powerful one-time associate of his and the November 1974 killing of Paulie McGonagle. Bulger went on to become one of the most well-known and feared mob bosses in American history. He was also identified as a top-echelon federal informant given protection for years by his childhood buddy, corrupt FBI agent John Connolly. His decade-and-half flight from justice landed him as No. 1 on the FBI’s Most Wanted List, concluding with his capture in California in 2011.

2 Charles (Dion) O’Bannion – Chicago’s Irish mob boss in the early days of Prohibition, O’Bannion feuded with the South Side Italians, led by Al Capone and his boss at the time, John (Johnny the Fox) Torro for control of the region’s sizeable racket empire and was slain inside his flower shop headquarters, Schofield’s, on the Windy City’s North Side on the afternoon of November 10, 1924. The assassination of O’ Bannion was preceded by the death of his one Italian ally, Mike Merlo, days prior of natural causes and carried out by Capone’s mentor, Frankie Yale, imported from New York, and two of his top hit men John Scalise and Albert Anselmi. O’ Bannion’s predecessor, the Polish-born Earl (Hymie) Weiss would meet a similar fate two years following the headline-dominating flower shop hit and Scalise and Anselmi were publically beaten to death with baseball bats for disloyalty in 1929, months after the St. Valentine’s Day Massacre that put a wrecking ball through the Northside Irish syndicate and it’s then-leader George (Bugs) Moran, with the executions of seven of his top men.

3 Vincent (Mad Dog) Coll – The rogue independent Irish enforcer and hit man, who worked for the Italian, Jewish and Irish mobs on the East Coast simultaneously was killed inside a Manhattan drug store, as he stood gunned down with machine-gun fire talking in a telephone booth on February 8, 1932. Forming his own gang in 1930, Coll waged a personal war with Jewish mobster Dutch Schultz, Irish mobster Owney (The Killer) Madden and Italian Mafioso Charles (Lucky) Luciano, resulting in his own murder. Actor Nicolas Cage portrayed Coll in the 1984 film “The Cotton Club,” in which Bob Hoskins played Madden, the man on the other line of the phone with him when he was felled.

4 The Mickey & Ruby Hits – Hell’s Kitchen gangland staples, Mickey Spillane, New York’s reigning Irish mob boss and Charles (Ruby) Stein, the head of the Jewish underworld in the area were both were killed by young, up-and-coming Irish gangster Jimmy Coonan, in the same week-span in May 1977. The murders of the local gang leaders let Coonan and his Italian mafia-backed “Westies Gang” assume control of the Hell’s Kitchen underworld. Ruby Stein, Coonan’s mentor, was slain after being lured to the Westies-owned 596 Club on May 15, his partially-dismembered body found floating in the Hudson River days later. Spillane, a longtime Coonan rival and increasing-nemesis to the Italians for refusing to allow them to earn in “The Kitchen,” was shot dead outside his Queen apartment on May 13, following a year-long murder rampage Coonan, the Italian mafia and independent hit man Joseph (Mad Dog) Sullivan, unleashed on Spillane and his inner-circle. Loyalists to Spillane, like Thomas (Tommy D) Devaney, Thomas (Tommy the Greek) Kapatos and Eddie (The Butcher) Cumminsky, were all done away with gangland style in the year leading up to their boss’ assassination.

5 Danny Walsh – The last of New England’s Prohibition-era Irish crime lords, the Providence-stationed Walsh was kidnapped and murdered on May 2, 1933, the victim of Boston mob boss Phil Buccola’s consolidation efforts. Walsh’s body was never found, but his passing allowed Buccola and his organization to take unfettered ownership of the New England rackets for the next two decades. Buccola orchestrated the killing of Boston Irish gang czar Frank Wallace two years before, leaving only the Rhode Island mob landscape left for Buccola to conquer.