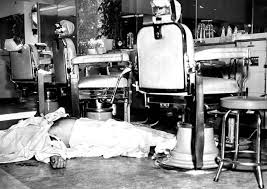 1 Albert (The Mad Hatter) Anastasia – The boss of what became the Gambino syndicate for most of the 1950s, the power-hungry Anastasia was famously slain by gunmen as he lay in a barber’s chair at the Park Sheraton Hotel on the morning of October 25, 1957. Numerous notorious mobsters have been connected to the never-solved mega mafia hit, yet still nobody knows for certain who permanent dispatched the ‘Mad Hatter.’ Organized crime experts and historians believe Anastasia’s savvy underling Carlo Gambino conspired with other East Coast dons and the National Commission to bump off his boss and assume command of the Family, giving it it’s current name.

2 Paul Castellano – Powerful, but incredibly unpopular and isolated from his troops, Castellano, the Gambino’s boss in the late 1970s and early 1980s, was shot dead in the middle of Manhattan rush-hour traffic as he stepped from his car in front of Sparks Steak House on December 16, 1985. Castellano was a victim of ascending capo John Gotti’s aspirations to be don and Gotti successfully rallied the rest of Family against the arrogant and out-of-touch Godfather, orchestrating his assassination so he could take the reins himself. Gotti was actually present at the hit, watching from a car across the street alongside his soon-to-be underboss, Salvatore (Sammy the Bull) Gravano, who would go on to eventually turn on New York’s “Dapper Don” and his testimony at trial would lead to Gotti’s conviction on the Castellano murder.

3 Vincent (The Executioner) Mangano – One of the original bosses of the “Five Families,” Mangano frequently fought with his underboss, Albert Anastasia, during his two-decade reign atop of what would become the Gambino Crime Family, and was killed on April 19, 1951 when Anastasia finally took action ordering his and his brother’s slayings. Vincent Mangano’s body was never discovered, while Philip Mangano, his younger sibling and longtime consigliere, was found dead in Sheepshead Bay, Brooklyn.

4 Roy DeMeo – A Gambino capo and hitman, known for his diverse rackets and lust for murder, the out-of-control DeMeo, tied to dozens to gangland homicides, was slain by his own “Gemini Lounge crew” members on January 10, 1983 after being lured to one of their houses for a purported meeting that was in fact a death trap. Then-Gambino boss Paul Castellano ordered the murder contract, feeling that DeMeo could pose a threat to him with all of DeMeo’s mounting legal problems and his unstable behavior.

5 Frank (Frankie D) DeCicco – The key in the plot to kill don Paul Castellano, being a Castellano protégé, DeCicco became underboss when John Gotti had Castellano murdered and first took control of the Family, but was blown up by a car bomb on the afternoon of April 13, 1986 on orders from Genovese and Lucchese Family bosses for the high-profile unsanctioned hit. DeCicco was killed outside the Veterans and Friends Social Club in Brooklyn, where he had just attended a meeting with “The Dapper Don”, an intended target, who averted the slaying by the bomber mistaking Gambino soldier Frank (Frankie Hearts) Bellino for Gotti, as he and DeCicco approached the explosive-strapped vehicle.