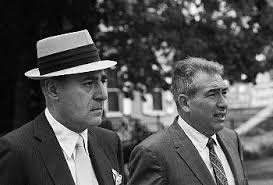 1 Willie Moretti – The Genovese Family’s longtime overseer of it’s affairs in New Jersey, an eventual syndicate underboss and one of the real-life models for Godfather scribe Mario Puzo’s Vito Corleone character, Moretti was killed by a hail of bullets from gunmen who stormed into Joe’s Elbow Room on October 4, 1951 as he lunched with associates around 11:30 a.m. in the Cliffside Park, NJ eatery. The motive for Moretti’s slaying, ordered by his boss Albert Anastasia, was Moretti’s worsening syphilis that was ravishing his mind and making his fellow Mafiosi worried about the repercussions. Moretti, notoriously bombastic and blunt, was incredibly close with and helped aid the ascensions of Hollywood actors and singers, like Frank Sinatra, Dean Martin and Jerry Lewis, inspiring the scene in The Godfather where Michael Corleone tells his girlfriend of how his father, Don Vito, made someone “an offer they couldn’t refuse,” to get a famous crooner out of a contract with a band. According to gangland street lore, Moretti made big band leader Tommy Dorsey “an offer he couldn’t refuse,” in letting Sinatra out of a hindering contractual agreement that he had signed early in his career. Martin and Lewis were scheduled to be at the lunch where their “padrone” was executed, but skipped out when Lewis fell ill with the mumps. More than 5,000 people attended Moretti’s funeral.

2 Tommy Eboli – Groomed by legendary New York dons, Charles (Lucky) Luciano and the syndicate’s namesake, Vito Genovese, Eboli, the Family’s boss in the late 1960s and early 1970s, was rubbed out on July 16, 1972 when he bumped heads with the administration of his own Borgata and had a falling out with the Gambinos over fronted drug money that was never repaid. A lone gunman on the back of a passing truck caught Eboli, himself believed to have been a triggerman in over 20 murders during his days as one of Luciano’s and Genovese’s top assassins, exiting his girlfriend’s Crown Heights, Brooklyn apartment and getting into his chauffeured Cadillac, unloading six shots into the car and killing him instantly.

3 Anthony (Tony Bender) Strollo – The syndicate’s capo in Greenwich Village and the man in charge of the Family rackets on the New Jersey waterfront for much of the mid-Twentieth Century, Strollo disappeared after leaving his house on the morning of April 8, 1962. His body has never been found and nobody has ever been charged with his murder. Tony Bender took over as “acting boss” when Vito Genovese sent to jail in 1959, but quickly began feuding with the imprisoned Godfather, who put out the contract on his head from behind bars.

4 Ralph Coppola – Close friend and protégé of current Genovese street boss Barney Bellomo, Coppola was named capo of Bellomo’s crew when Bellomo went away to prison in the 1990s and let his ego get the best of him, leading to his disappearance on September 16, 1998. According to federal prosecutors, Bellomo and acting street boss Frank (Farby) Serpico ordered the hit on Coppola, whose body has never been unearthed.

5 John (Johnny Coca-Cola) Lardiere – Known forever as the “So, what are ya gonna do now, tough guy?” murder, Lardiere, a Genovese soldier on a 24-hour furlough from prison for the Easter holiday, was allegedly killed by soon-to-be capo Michael (Mikey Cigars) Coppola, at a Bridgewater, New Jersey motel on April 4, 1977. Lardiere, thought by Genovese brass to be considering becoming a cooperator, was met by Coppola, sporting a .22-automatic pistol, as he got out of his car at the motel to meet a girlfriend of his for a quick rendezvous. Upon trying to fire, Coppola’s gun jammed, leading Johnny Cokes to remark, “So, what are ya gonna do now tough guy?,” and Mikey Cigars promptly pulling a .38 revolver from an ankle holster and unloading four shots into him at point-blank range. Coppola was charged with the murder and other racketeering offenses in 1996 and went on the lam, before finally being apprehended and tried, where he was convicted of the racketeering, however acquitted of the Lardiere hit.