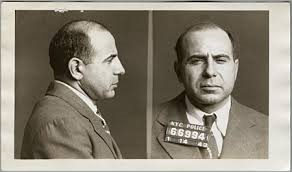 1 Carmine (The Cigar) Galante – Adversarial, secretive and power-obsessed, Galante, the high-profile Bonanno Family Godfather was felled in dramatic fashion, shot dead as he lit his trademark cigar after a lunch on the patio of Joe and Mary’s Italian Restaurant on July 12, 1979 in Brooklyn. Photographs of the crime scene, with the deceased Galante clenching his final stogie between his teeth, became iconic and the infamous mob hit set off two years of unrest in the faction-heavy syndicate. The one-time underboss to family-founder Joseph (Joe Bananas) Bonanno, when Bonanno retired to Arizona the diminutive, yet feisty Galante, who made a fortune in narcotics, moved fellow don candidate Philip (Rusty) Rastelli aside – helped greatly by Rastelli’s imprisonment – and declared himself the new ‘Boss of bosses’ in the New York underworld. This declaration and Galante’s continued stepping on the toes of the other East Coast Godfathers, led to the murder contract being issued by the Commission and carried out by his own men. Later in his life, Galante had begun relying on and interacting practically solely with a group of “zip” Sicilian immigrants. His bodyguards, Cesar Boneventre and Baldo Amato, were at the forefront of Galante’s personal army and they betrayed their boss, helping arrange his murder in exchange for promotion to capos once Galante was out of the way. When a hit team burst into Joe & Mary’s on Knickerbocker Avenue at 2:45 p.m., Boneventre and Amato fled and allowed them to blow Galante and two of his lieutenants away in front of a restaurant full of horrified patrons.

2 The Three Captains Hit – Depicted in the classic Johnny Depp-Al Pacino mob flick Donnie Brasco (1997), a trio of Bonnano capos, Alphonse (Sonny Red) Indelicato, Philip (Phil Lucky) Giancone and Dominick (Big Trinny) Trinchera, were called to a purported sitdown at Brooklyn’s Embassy Terrace social club and café for peace talks on May 5, 1981, but ambushed with gunfire and killed when they arrived instead. Indelicato was the leader of a break-off faction of the Bonannos that opposed imprisoned don Rusty Rastelli, Carmine Galante’s successor, and his two main supporters on the street, captains, Joseph (Big Joey) Massino and Dominick (Sonny Black) Napolitano, in the wake of Galante’s slaying. Massino and Napolitano were part of the hit team that took out Sonny Red, Phil Lucky and Big Trinny and while Massino was destined for meteoric heights (most powerful U.S. don of the 1990s), Sonny Black would meet a similar fate three months later.

3 Salvatore (Sal the Ironworker) Montagna – Called “The Bambino Boss” by the New York press, due to him being a baby-faced 36 when he took over the Bonanno Crime Family as “acting boss,” Montagna was deported to Montreal in 2009 and killed there on November 24, 2011, following his attempt to wrestle control of the Canadian mafia from imprisoned Quebec don Vito Rizzuto, locked up for his role as an imported gunmen in the “Three captains hit” almost 30 years earlier. First, Sal the Ironworker joined forces with Rizzuto’s two right-hand men, Raynald Desjardins and Joe Di Maulo and began attacking members of Rizzuto’s inner-circle and immediate family. Montagna’s alliance with Desjardins and Di Maulo was short-lived and in September 2011, Desjardins survived an assassination attempt, alleged to have been ordered by his former break-away ally. Two months later, Montagna was lured to a house in a Montreal suburb owned by a Desjardins lieutenant and attacked. Avoiding death at the house, Sal the Ironworker bolted on foot and led his assailants on a chase that ended with him being shot twice in the back of the head and left sprawled out in a shallow riverbed. Desjardins and seven others are facing charges and a 2015 trial on the Montagna murder. Di Maulo was killed on Rizzuto’s orders before Rizzuto died of cancer in December 2013.

4 Dominick (Sonny Black) Napolitano – Played by actor Michael Madsen in the movie Donnie Brasco, Napolitano was killed on August 17, 1981, once it was revealed that he had mentored and proposed for membership in the Bonanno Family undercover FBI agent, Joe Pistone, codenamed; Donnie Brasco. Napolitano knew his fate and went to a meeting at the house of Bonanno mobster Ronald (Ronnie the Monkey Man) Fillicomo after giving his valuables to his wife and telling her to relay a message to Pistone that he didn’t hold a grudge. Once he got to the Monkey Man’s house in Brooklyn, Sonny Black, was shot to death by Filicomo and button-man Frank (Curly) Lino. After the pair of gunmen failed to finish him off on the first go-around of shots, Napolitano implored his killers to “Give me one more and make it a good one.” His hands were chopped off as a symbol of him introducing to and allowing a member of law enforcement to shake hands with made members of the mob.

5 Cesar Bonventre – The suave, lethal and increasingly-popular Sicilian capo and leader of the Bonanno’s Zip faction, Bonventre gained too much power for his boss Rusty Rastelli’s liking and on April 17, 1984, he was shot dead by Louis (Louie Ha Ha) Attanasio, as he fought for his life in an attack that began while driving in a vehicle and then spilled onto the floor of a Rastelli-owned factory. Bonventre was one of the nation’s largest drug distributors and a mastermind of the Pizza Connection heroin case. The FBI suspected him as a triggerman in multiple gangland slayings during his stay in New York during the 1970s and early 1980s.