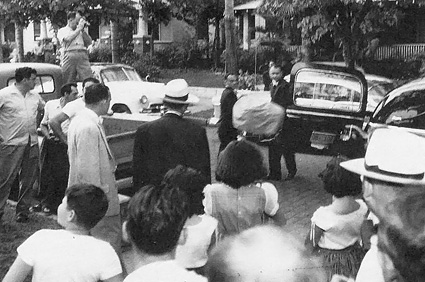 1 Ignacio Antinori – Tampa’s first Italian mafia don and a world-renowned narcotics czar, Antinori was shot-gunned to death, his head literally blown off, while having a cup of coffee at the Palm Garden Inn on October 22, 1940. Ruling for two decades atop the Tampa mob, the 55-year old Florida Godfather was killed after allegedly getting into a dispute with the Chicago mafia over a drug deal gone-bad.

2 Charlie (The Dean) Wall – An incredibly powerful and politically-connected independent Tampa underworld baron during the first half of the Twentieth Century, the 75-year old Wall was brutally slain, beaten with a baseball bat, stabbed 10 times in the chest, his throat slit ear-to-ear, on April 18, 1955. In addition to testifying too candidly in front of the Kefauver Committee on organized crime (a copy of which was left next to his dead body), he was suspected of coordinating an unsuccessful attempt on the life of Santo Trafficante, Jr., son of then-Godfather and the crime family’s namesake, Santo Trafficante, Sr. Area mob figures, Nick Scaglione and Joe Bedami were the top suspects in the notorious slaying. Scaglione, a former bodyguard of his, was the last person seen with Wall alive, as the pair were seen leaving a local tavern together the night he was killed. Bedami was done away with gangland style in 1967. Walls, whose father was the former mayor of Tampa in the late 1870s, made a fortune in Prohibition Era bootlegging and he engaged in an epic and bloody street war against Trafficante’s predecessor, Ignacio Antinori, that lasted a dozen years (1928-1940). It is believed that Wall aided the Chicago mob in carrying out the hit on Antinori.

3 John (Handsome Johnny) Roselli – The Chicago mafia’s high-profile and charismatic representative on the West Coast dating back to the days of Al (Scarface) Capone, Roselli angered his superiors in the mob by testifying at congressional hearings on the JFK assassination and the Italian OC-CIA plot to kill Cuban President Fidel Castro, disappearing en route to a golf date at a South Florida country club on July 28, 1975. Two weeks later, Roselli’s heavily battered body was discovered stuffed inside a 55-gallon drum floating in Miami’s Biscayne Bay. The night before he went missing, Handsome Johnny dined with Santo Trafficante, Jr., by then having succeeded his dad as don and thought to have had a hand in the murder plot.

4 “The Two Jimmys Murders” – Between 1948 and 1950, high-ranking Tampa mobsters Jimmy Velasco and Jimmy Lumia, reputedly bitter enemies, were both killed. Velasco, the syndicate’s “political fixer”, was shot dead in front of his wife and son while he was getting into his brand new Buick in Ybor City on December 12, 1948, a controversial payoff list in his pocket. Florida hoodlum Joe Provenzano was acquitted of the murder at trial. Lumia, the protégé of Santo Trafficante’s underboss Salvatore (Red) Italiano and someone suspected of helping arrange the Velasco hit, was shot-gunned to death by a shooter in a passing truck as he sat in a car outside his oil company speaking to an employee of his, on June 5, 1950. Lumia became the Family’s “acting boss” by default, when Trafficante and his son fled to Cuba to avoid testifying at the Kefauver hearings and Italiano took off for Mexico. Upon the Trafficantes’ return to Tampa, they felt Lumia was being disrespectful and had gained too much power and put out the contract on his head.

5 Thomas (Tommy the Enforcer) Altamura – The imposing Miami-based Gambino Family mobster that was known to hobnob with celebrities and millionaires around the ritzy North Bay Village neighborhood was killed on Halloween night 1967, shot in the back of the head while he glad-handed his way through the Harbor Lounge, the bar attached to the popular Place For Steak restaurant. Altamura had been feuding with fellow South Florida mob figure, Anthony “Big Tony” Esperti, a boxer-turned-gangster that had waited for him at the watering hole and pounced within a minute of him walking in the door. Esperti would go on to be convicted of the slaying and sent to prison for the rest of his life.