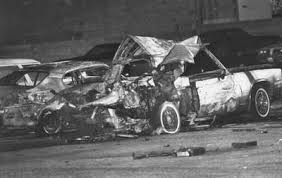 1 Augie Maniaci – Longtime Milwaukee mafia chief that was increasingly insubordinate, power-hungry and believed to be cooperating with the FBI, Maniaci, 66, was shot to death outside his eastside home as he went to leave for work on the morning of September 11, 1975. Maniaci was openly bickering with his boss, Wisconsin Godfather Frank (Frankie Bal) Balistrieri. Tracing his roots in the crime family all the way back the Prohibition Era, Maniaci was a top suspect in the 1955 murder of local wiseguy Jack Enea and continually feuded with Frankie Bal, once he took the Family’s boss’ seat in the early 1960s. He was seen getting into a shouting match with Balistrieri’s second-in-command, Stevie DeSalvo at a Milwaukee steakhouse in the days leading up to his slaying. Balistrieri was quoted as telling his inner-circle “I’ve got to get this fucking son of a bitch before he gets me.” The murder weapon in the Maniaci hit was found in storm drain near the Milwaukee River, but charges have never been filed in the notorious gangland homicide. FBI files and court testimony points to Frankie Bal and DiSalvo farming the contract on Maniaci’s head out to their underworld benefactors in the Chicago mafia – “Outfit” soldiers Chuckie Niccoletti and Nick D’Andrea were both considered prime suspects and met similar gruesome fates in the years to come. Career-criminal Bobby Hardin testified at a future trial that he helped D’Andrea carry out the job at the behest of Chicago capo, Albert (Caesar the Fox) Tocco. The assassination of Windy City mob dignitary Sam (Momo) Giancana, a trusted Maniaci ally, in May of that year, set the groundwork for Maniaci’s downfall.

2 Augie Palmisano – Headstrong Brewtown mob capo that got into several heated and public verbal altercations with don Frank Balistrieri in the years preceding his passing, Palmisano, 49, was blown to pieces by a car bomb that detonated in the underground garage of his trendy apartment building on the morning of June 30, 1978. Balistrieri, who also suspected Palmisano of being an FBI informant, was quoted telling fellow mobsters at a lunch meeting in the months that followed; “He called me a name…….. to my face, now they can’t find his skin.” Palmisano came up in the Midwestern labor union scene, getting his start as a driver for Milwaukee mob consigiliere Joseph (Joe Camel) Caminitii and captain Augie Maniaci. Backing Maniaci in his battle for power with syndicate brass, per FBI files, Palmisano was openly telling people that he wanted to rub out Balistrieri and his brother Pete in the time surrounding his murder.

3 Louie Fazio – The 58-year old “big shot” Milwaukee crime family soldier and Wisconsin restaurateur couldn’t get along with local mafia boss Frank Balistrieri either and was killed September 27, 1972, gunned down at 6:45 a.m. outside his home getting into his car. Fazio served 12 years in prison (1946-1958) for the March 1946 gangland slaying of Kenosha wiseguy Mike Farina, who had just robbed a house of a Milwaukee mobster weeks earlier. In the year leading up to his murder, Fazio and Balistrieri fell out over the amount of tribute payments Frankie Bal was receiving, which he felt needed to be higher and Fazio balked at.

4 John (Johnny D) Di Trapani – A popular and flashy Milwaukee mob capo, Johnny D got into a beef in Chicago with leaders of the Outfit and wound up dead on March 18, 1954, discovered slumped behind the wheel of his black Cadillac on a westside street corner, his body riddled with six bullets from an automatic pistol. Di Trapani was seen dining at Chico’s BBQ (owned by local gangster Frank LoGalbo) with his family the night before his slaying and then attending a meeting at a downtown night club later that evening. FBI documents related to the investigation into Johnny D’s murder allude to Windy City mafia power Felix (Milwaukee Phil) Alderisio ordering the hit, said to be related to a dispute over money tied to mutual rackets and bar businesses in Illinois.

5 (tie) Anthony Biernat – Based out of Kenosha, Biernat was a mobbed-up jukebox and vending machine operator and tangled with mafia crews in Milwaukee and Chicago, leading to his vicious January 7, 1963 slaying. When his body was finally uncovered in a makeshift shallow farmhouse grave, he was hogtied and had been bludgeoned to death, his skulled cracked open in four spots. The Milwaukee FBI office tapped Frank Balistrieri, the city’s crime family’s new boss, Stevie De Salvo his underboss and top-tier associate Frankie Stelloh, as the prime suspects and the orchestrators of the murder, but never charged them with the hit.

5 (tie) Izzy Pogrob – The portly and jovial Jewish nightclub owner and Wisconsin mob associate was whacked Jan 9, 1960, found shot nine times, bound and blindfolded in a ditch. His death certificate was signed after he squealed on Milwaukee Mafioso Louie Fazio to police in a beef over a shakedown attempt. Pogrob owned hot night spots in the Cheese State and down in Florida, businesses the FBI believed a series of wiseguys held interests in.

5 (tie) Max Addonis – Well-known Milwaukee mob associate and one-time enforcer for Chicago mafia’s representative in Wisconsin, Frank (Frankie the Horse) Bucceri and his wife, notorious rustbelt gangland gun moll, Sally Pipia, who owned Milwaukee’s famed Sally’s Steak House at The Knickerbocker on the Lake Hotel, Addonis was killed execution style on March 18, 1989 in his restaurant office at his downtown eatery, Giovanni’s. According to Chicago Police records, Addonis’ murder was contracted out to a tandem of African-American “gang bangers” from Illinois, both of whom wound up getting clipped themselves shortly thereafter. Addonis made quite a few of enemies in his days in the underworld, surviving several attempts on his life before he was finally offed. He confided to Pipia in a phone call she received the night before he died that “his days were numbered” and he knew people were trying to kill him.