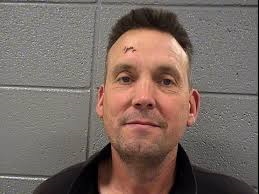 The racketeering and home invasion charges carry maximum 60-year prison sentences. Using tips from street gang members, a police radio scanner and stolen police uniforms, the P-K’s raided a series of area drug houses before the cops could. Their traditional home invasions were brutal and bloody; Panozzo chopped off one victim’s ear for lying to him in the midst of Panozzo robbing him.

The robbery crew was caught in the act, set-up by the cops and tricked into thinking they were ripping off a 45-kilo shipment of cocaine from a stash house on South Brandon Avenue in the city’s Hegewisch district, when in fact they were walking into a carefully-planned bear trap, the culmination of an investigation called, “Operation Crew Cut”.

Walking out of the purported stash house early Thursday morning, Panozzo, Koroluk and their associates were met by a swat team of Chicago police officers.Panozzo and the half-Polish, half-Italian Koroluk, 55, are both Grand Avenue mob crew veterans, first reporting to Joseph (Joey the Clown) Lombardo, currently imprisoned, and now taking orders from Albert (Albie the Falcon) Vena, Lombardo’s replacement as capo of the city’s Westside.

Sources close to the investigation, say Vena, a person dubbed “the most dangerous gangster in Chicago” by organized experts, the Windy City media and fellow mobsters alike, was “very close” to be indicted in the case, too. FBI wiretaps and street informants tie Vena to pocketing a percentage of the scores Panozzo and Koroluk were taking down.

Gangster running buddies for years, Panozzo and Koroluk were groomed in the art of robbery by Joey the Clown himself. The pair came up in a Lombardo-overseen burglary crew headed by his driver, James (Jimmy Legs) D’Antonio. FBI documents related to D’Antonio claim that Panozzo and Koroluk actually went along on the final actual robbery job the Clown personally participated in during an early 1980s jewelry store heist. By that time, Lombardo was already a capo and according to the report took a liking to Panozzo, nicknaming him “Bobby Pinocchio” for his talent for deception. The young Panozzo and Koroluk are alleged to have acted as look-outs on the job.

The P-K crew has been on law enforcement’s radar for the past couple years. In 2012, crew members Louie Capuzi and Frank Obrochta, were nailed on charges of burglary, home invasion, insurance fraud and prostitution and are currently awaiting trial.

Last fall, Chicago Police discovered Panozzo and Koroluk tried to put a murder contract on a witness in a forthcoming home invasion case. Then in the winter, Panozzo and Vena were mentioned at the trial of Windy City cop-turned-mobster Steve Mandell, convicted in February of attempting to kidnap, torture and eventually murder a pair of associates and one of their wives, in a ploy to assume control of one associate’s strip clubs and the other’s real estate assets. Testimony and FBI surveillance photos revealed that Panozzo and Mandell dined with Vena at Vena’s favorite Italian eatery, La Scrola (also a “forever fav” of Lombardo when he was on the streets).

Part of the indictment against Panozzo released Saturday quotes a confidential federal informant as accusing Panozzo of the murder of an elderly woman back in 1987, a homicide he is said to have bragged about. The informant said the murder was preceded by the woman signing over her property to Panozzo and concluded with him allegedly killing her by throwing her down three different flights of stairs in her apartment building.

Law enforcement sources in the Windy City tell the Mob Insider that a first-degree homicide charge against Panozzo could be added to the indictment before the case hits trial and that the FBI and Chicago PD detectives are investigating Panozzo’s connection to a currently unsolved October 1987 murder that took place in an apartment complex on W. Ohio Street and matches the informant’s description of events.

Less than a decade ago, Panozzo and Koroluk were arrested and convicted on similar burglary charges and were sentenced to seven-year prison bits in 2006. A source close to the Grand Avenue crew claims Panozzo also helps Vena, someone he’s very close to, look after the crew’s loan sharking business and that he has a reputation on the city’s Westside as a “tough-as-nails collector.”

One of the street gangs feeding the P-K gang with information on what drug houses to rob was allegedly the C-Notes, according to the Chicago Crime Commission, a longtime “Outfit JV team,” that Vena was once a member of and maintains close ties with.

“We’d watch Lombardo’s young guys and Bobby and Albie were two you always knew weren’t guys you messed with, they were the type of individuals that really enjoyed the work, took pleasure in inflicting pain,” he said. “Lombardo knew there was always room in the Outfit for guys like that and he made sure they were utilized from a young age.”