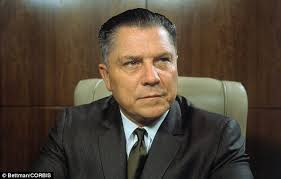 1 Jimmy Hoffa – The most infamous and iconic unsolved crime in American history, Hoffa, the high-profile one-time Teamsters union president intent on reclaiming his post upon his release from prison to the dismay of his former allies in the mafia, disappeared from a suburban Detroit restaurant parking lot on July 30, 1975, never to be seen again. The spunky labor leader and longtime mob associate, who had used his prior joining forces with the underworld to get elected in the first place and build the union to goliath heights, was supposed to meet Detroit mafia street boss Anthony (Tony Jack) Giacalone and New Jersey mob capo and Teamsters power broker Anthony (Tony Pro) Provenzano at the Machus Red Fox Restaurant that afternoon, but it was a set-up and he was kidnapped and killed instead. Hoffa had been in the midst of a multi-year media campaign to take back the union, threatening and bad-mouthing the mob and possibly cooperating with the FBI to rid the Teamsters of mafia influence. A myriad of theories and suspects in the crime have been proffered in the years since to no avail, lending to its enormous legacy and the public’s seemingly-everlasting morbid curiosity that surrounds the slaying and its circumstances. Investigators believe Hoffa probably “done in” by a team of hit men consisting of members of Provenzano’s and Giacalone’s crew and his body possibly incinerated at one of the three nearby sanitation companies owned by local mobsters.

2 The Crosstown Mob War – In an epic gangland conflict fought for supremacy of the Detroit underworld in the wake of Prohibition Era don Salvatore (Singing Sam) Catalanotte dying of pneumonia, the city broke off into two different factions, one led by the East Side Gang’s William (Black Bill) Tocco and Joseph (Joe Uno) Zerilli and the other spearheaded by West Side Gang boss and Catalanotte’s top advisor Chester (Big Chet) La Mare. A close ally of New York Godfather Joseph (Joe the Boss) Masseria, La Mare’s engineered the Vernor Highway Fish Market Murders on May 31, 1930; his two top lieutenants “The Two Joes,” Joe Amico and Joe Locano gunned down Gaspare (The Peacemaker) Milazzo, aligned with Tocco, Zerilli and Masseria’s East Coast rival Salvatore (Little Cesar) Maranzano, and Milazzo’s bodyguard Sam (Sasha) Parrino, at a purported peace conference. Less than a year later, on February 7, 1937, Amico and Locano, at the behest of Tocco and Zerilli and with the help of their boss’ young bride, assassinated La Mare inside his Hamtramck mansion. Big Chet La Mare’s murder declared Tocco, Zerilli and their East Side Gang the winners of the war and paved the way for the creation of the modern-day Detroit mafia family.

seph (Joe the Baron) Tocco – One of the first Toccos to land in Detroit, Joe the Baron was the area’s Downriver mob boss for most of Prohibition and the first seven years of the city’s LCN Family, before being gunned down in front of his house on May 3, 1938. A week later, Tocco succumbed to his wounds and died on May 10. With Joe the Baron’s first cousin, Black Bill Tocco, in prison serving a sentence for tax evasion, he was left unprotected and when the flashy racketeer feuded with up-and-coming local mobster Anthony (Tony Cars) D’Anna over Ford Motor Company stock-options, Black Bill’s replacement Joseph (Joe Uno) Zerilli was said to have signed off on the headline-grabber of a hit.

4 The Three Soldiers Hit – Detroit mob associate Ernest (Ernie the Greek) Kanakis refused to die quietly and instead killed the three local mafia “button men” sent to kill him on July 11, 1976. Kanakis, a gambling specialist who broke off a business relationship with mobster Frank (Frankie Razz) Randazzo, was brought to Randazzo’s basement on the city’s eastside and attacked. Stabbed repeatedly with an ice pick, When the assassins went to shoot Kanakis in the head, the gun jammed and a bleeding Ernie the Greek took out a revolver of his own from a holster on his leg and shot Frankie Razz, Joe Siragusa and Nicolo (Nick the Executioner) Ditta, a renowned mid-Twentieth Century Motor City version of Godfather character Luca Brasi. Acquitted of the triple murder on a claim of self-defense at trial, Kanakis survived another attempt by the mob to kill him in 1984. Tony and Billy Giacalone contracted out the hit to enforcer Frank (Frankie the Bomb) Bommarito, who assigned the task to an underling of his working for the FBI. Bommarito requested Kanakis be slain and pictures of his bloody corpse delivered to the Giacalone brothers in a Christmas card.

5 (tie) Peter (Fast Pete) Cavataio – A veteran Detroit mob soldier and son-in-law to legendary Motor City gangland enforcer Pietro (Machine Gun Pete) Corrado, Fast Pete was killed on July 9, 1985, found tortured and shot execution style in a garage down by the Canadian border near the Ambassador Bridge. Once tabbed as a surefire future leader of the local mafia, Cavataio, whose dad and uncle were “made” members of the syndicate, fell out of favor with crime family administrators for his renegade behavior and his penchant for sleeping with the wives and girlfriends of imprisoned mobsters. Following the death of his brother-in-law and close friend Dominic (Fats) Corrado of cancer in June, Fast Pete, 55, knew his days were numbered and they were: he was slain soon therafter in a hit allegedly orchestrated by his other brother-in-law Anthony (Tony the Bull) Corrado and a crew led by Vito (Billy Jack) Giacalone, the younger brother of Tony Giacalone, behind bars at that time. Cavataio’s murder highlighted a year where the Detroit mafia was especially busy, tied to a dozen gangland hits.

5 (tie) Peter (Little Peter) Katranis – The son of the city’s Greek mob chief Peter (Pete the Greek) Katranis, Little Pete, was an enforcer for the Italian mafia and was killed on New Year’s Day 1972, after he began freelancing in the loansharking and shakedown rackets. When he sucker punched local rising-star gangster and the Giacalone brothers’ protégé, Ronald (Hollywood Ronnie) Morelli at a Christmas party, the Detroit mob issued the contract on his head. Nobody has ever been charged with the hit, but FBI documents related to the murder investigation implicate his own younger brother, Michael (Greektown Mike) Katranis as luring him to an Oakland County bar where Morelli and Giacalone strong arm and hit man Robert (Bobby the Animal) La Puma “banged him out.”