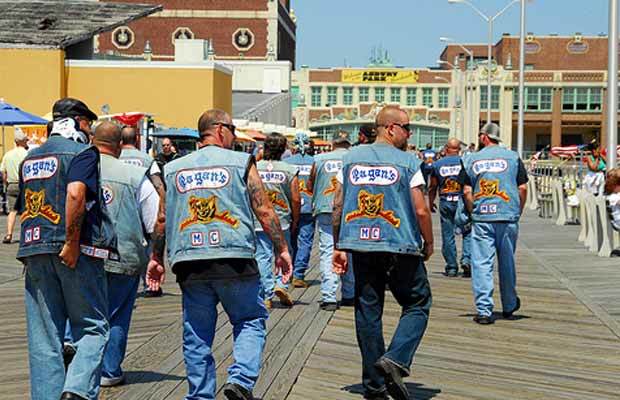 Federal authorities in Pennsylvania have questioned Pagan’s Motorcycle Gang enforcer and drug chief Patrick (Redneck) Treacy regarding any knowledge he has on a pair of notorious unsolved Philadelphia double homicides, the 2005 disappearance and murder of couple Richard Petrone and Danielle Imbo and the 2013 slayings of Anthony Rongione and Michael Spering , per sources in law enforcement. Treacy, 49, was sentenced late last week to two decades behind bars for running a prescription pill mill with local physician Dr. William O’Brien that cleared a reported five million dollars in illegal profits.

Petrone and Imbo vanished without a trace 12 years ago this week, on the evening of February 19, 2005 after leaving a Philadelphia bar together. Police believe their homicides were of the murder-for-hire variety.

Talk of Treacy possibly taking part in a gangland murder conspiracy arose at O’Brien’s trial back in the summer, when tapes of Treacy’s post-arrest interrogation were played in court in June and it revealed him answering queries about an unnamed unsolved homicide, denying any involvement. Sources tell Gangster Report, as others told renowned crime reporter George Anastasia at BigTrial.net in the summer, FBI agents pressed Treacy on info related to both the Petrone-Imbo and Rongione-Spering investigations to no avail.

O’Brien, 52, was found guilty at trial and slapped with a 30-year prison sentence in October 2016. Testimony at O’Brien’s trial implicates him and Treacy in a murder-for-hire plot to whack O’Brien’s wife, a hit that was never carried out, per authorities, only because Treacy was indicted and jailed in the pill-mill drug conspiracy in 2015. The day he was arrested, per sources, he was immediately pulled into an interrogating room and grilled on, among other things, any knowledge he had on the Petrone-Imbo and Rongione-Spering hits, respectively.

Richard Petrone, 35, and Danielle Imbo, 34, who were dating, were last seen leaving Bar Abilene – now closed – at around 10:30 p.m. on February 19, 2005, departing the establishment in Petrone’s black-colored 2001 Dodge Dakota pickup truck after drinks with another couple. Petrone was in his family bakery business and had an argument on the phone with Imbo’s ex-husband in the days prior to the couple’s disappearance. The FBI has publically eliminated Imbo’s ex as a suspect.

Anthony Rongione, 44, was allegedly indebted to O’Brien and Treacy for $11,000 for a large shipment of pills he received on consignment and hadn’t squared with his suppliers yet. Per court records and federal documents, Treacy and an underling went to Rongione’s home on the night of February 17, 2013, equipped with brass knuckles and led pipes, with the intention of collecting the debt, but left empty handed when Rongione’s neighbor’s security system scared them away. The next day, on February 18, 2013, Rongione and an associate of his named Mike Spering, 52, were found shot to death in a house in South Philly.

O’Brien was caught on a federal wiretap threatening Rongione.

“I will hunt you down like a dog…. I will hurt you,” he was recorded telling the debtor.

Turncoat Pagan’s lieutenant Michael (Tomato Pie) Thompson testified at O’Brien’s trial that O’Brien complained of being unable to get the $11,000 of back-payment from Rongione in the weeks before O’Brien dispatched Treacy to collect the debt from him. Lawyers for O’Brien and Treacy deny their clients have had anything to do with any acts of violence.