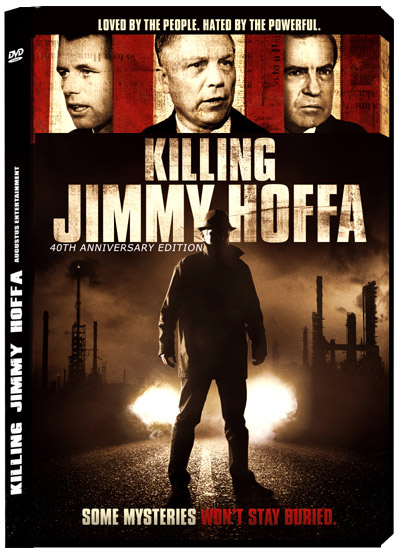 Al Profit & Scott Burnstein, from Gangster Report, have just released the “Killing Jimmy Hoffa” documentary, in honor of the 40th anniversary of his infamous kidnapping and presumed murder.  Jimmy Hoffa’s disappearance and probable murder is one of the great crimes of the century. Despite a massive Federal investigation spanning 4 decades and hundreds of suspects, only the general contours of the crime are known. In the American mythology Hoffa is both hero and villain; a self-made man who ran the nation’s largest union and was so beloved by the rank and file Teamsters he represented that they supported him as union president while he was under indictment and even in Hoffa also moved in the highest circles of organized crime.

Among his closest friends and business partners were members of the national Mafia commission, men he was forced to align with during the violent and chaotic early days of union building when corporations deployed armed goons and police to attack workers in the street, and unions battled each other to control the workforce. Hoffa’s chief nemesis was US attorney general Robert F. Kennedy, and the two men developed a deep hatred for each other. In the long aftermath of President F. John Kennedy’s assassination Jimmy Hoffa’s name swirled in the aether of conspiracy theories, and his close Mafia associates Carlos Marcello and Santos Trafficante are at the center of the most plausible theories about Kennedy’s death.

You can rent it or buy it below, it’s also available on these platforms:

The two men Hoffa thought he was going to meet on the day of his disappearance have the most ironclad alibis of any suspects in the case. All the FBI’s other leads came from informants and unreliable witnesses. In the years after the case the FBI has dug up farms, investigated waste dumps, and debriefed numerous Mafia turncoats that purported to have information on Hoffa’s death, but they all turned out to be ephemeral. The only physical evidence is a single piece of Hoffa’s hair found in Mafia enforcer Tony Giacalone’s son’s car.

Frank Sheeran, a Teamster ally and Mafia enforcer, made the claim that he personally killed Hoffa in a house in Detroit and his story became a national best seller. But the veracity of Sheeran’s story is undermined by his previous attempts to get a book deal centered around the claim that Richard Nixon had Hoffa killed, and his use of a forged document purportedly signed by Hoffa that validated his “Who Killed Jimmy Hoffa” will cover the life and times of Hoffa and explore all the theories about his disappearance. In analyzing the suspects we will take a tour of America’s 20th criminal landscape and see how the Hoffa hit was the final act in the nearly 50 year reign of La Cosa Nostra as a shadow government that wielded chilling power and control over America.

In “Killing Jimmy Hoffa”, we unveil a previously unknown, and the most likely, account of the events of July 30th, 1975, the day James Riddle Hoffa vanished.

The cast of characters in the saga of Jimmy Hoffa is quite a menagerie. His peers were the most powerful men in America, on both sides of the law. The Kennedy brothers, Mafia strongmen like Detroit’s Giacalone brothers and the murderous Carmine Galante, hard-nosed union men, CIA spies, and the captains of American industry. Hoffa was at the center of such a complex web of relationships, plots, and conspiracies that eventually he could no longer manage them and found himself taking a ride that he would never return from.

t of his fame, his face was more recognizable than a movie star, he was more loved than Mickey Mantle. Just as the Kennedy’s were the Golden Boys of the aspiring classes, of the college students , James Hoffa was the Golden Boy of the all those Americans who worked for a living, even if he was just as flawed as Jack and Bobby…

Hoffa was born in 1913 in Brazil, Indiana- a mining boomtown. Brazil was a rough town, featuring one saloon for every 500 residents, and the Hoffa’s neighborhood was known as “Bloody Row”. Black and white miners often fought in the streets and Hoffa’s uncle James operated a brothel and gambling house.

In 1920, Hoffa’s father died and the family moved to Clinton, Indiana just as Prohibition was kicking in. Clinton was a hotbed of bootlegging and the Hoffa’s settled in an Italian neighborhood beset by small time proto-Mafiosi. The Ku Klux Klan would often march through the Italian section right under the Hoffa’s window to rail against foreigners and Catholics.

In 1924 Hoffa’s family moved to the biggest boomtown of them all-Detroit. The city that the struggling Hoffa family arrived in was both a land of opportunity, and of danger. It had the highest murder rate of any city in the North and the Jewish Purple gang was responsible for smuggling a substantial portion of America’s bootleg whiskey into the country over the Detroit River. The burgeoning Motor City was a volatile cauldron of European immigrants, white hillbillies, and Blacks from the American south; it made for a deadly mix. Between January 1925 and June of 1926 the Detroit Police killed 25 African-Americans; the Purple Gang was responsible for 500 murders; and a secret society called the Black Legion operated in the police department and factory halls to maintain Protestant supremacy in the fast growing city. Then the Great Depression hit.

In 1932 unemployment in Detroit approached 50 percent. By this time, young Jimmy Hoffa had dropped out of high school at 14 to help support the family and was working a grocery store loading dock. One hot summer day, while handling a load of fresh strawberries, Hoffa organized his first strike and began his career in labor organizing. Hoffa quickly moved up the Teamster ranks, and in 1941 when the upstart CIO began poaching Teamster members, Hoffa led the brutal street fighting that ensued.

Since the start of the Depression violence within and directed against the labor union had intensified. Ford Motor Company itself maintained an army of felons and goons under Security chief Harry Bennett to attack the UAW, and not just with fists-there were multiple assassination attempts against UAW leader Walter Reuther. Hoffa and his chief lieutenants Roland McMaster and Dave Johnson were all the recipients of broken limbs and stitches from their street wars against the CIO. Hoffa then made a fateful decision, one that would stay with him throughout his life and likely led to his eventual demise; he brought the Detroit Mafia into the Teamsters.

In the early 30’s Hoffa had a girlfriend named Sylvia Pagano. Pagano later had an illegitimate son named Chuckie ‘O’ Brien that Hoffa acted as a sort of foster father for, despite his being married himself in 1936. Chuckie’s godfather (and Pagano’s new boyfriend) was Frank Coppola, the Detroit boss for Lucky Luciano’s heroin ring that was the United States’ chief supplier from the 1930’s to the early 50’s.

Fighting for his life in the streets against the CIO, Hoffa turned to Coppola for help. Coppola set him up with Santo Perrone, a Detroit LCN member that lent his muscle to the fight. It worked; by 1946 Hoffa was the president of Detroit Local 299. 1946 was also the year he got his first criminal conviction, pleading guilty to extorting money from grocers to protect them from strikes.

In 1952 Jimmy Hoffa helped Dave Beck become the new president of the International Brotherhood of Teamsters (IBT) and himself became vice-president. In 1955 Hoffa helped set up the Teamsters pension fund (with the Allen Dorfman), which became the most valuable source of funds organized crime would have access to since the end of prohibition.

In January 1957 the McClellan “Rackets committee” with Robert Kennedy as chief council, takes on corruption in unions. The International Brotherhood of Teamsters (IBT) was the largest union in the U.S. at the time with over 1.3 million members and was the commission’s chief target.

Jimmy Hoffa first met his nemesis Robert Kennedy through Eddie Cheyfitz, who worked in the IBT’s public relations department and was also secretly working for Teamster vice-president Hoffa to help oust Dave Beck as president. Hoffa had this to say after his first meeting with RFK: “I can tell by how he shakes hands what kind of fellow I got. I said to myself, ‘Here’s a fella thinks he’s doing me a favor by talking to me”.

Kennedy remarked of Hoffa that he was ‘a bully hiding behind a facade.’ From the outset of their relationship there was an extremely emotional note to all their dealings, even during the Congressional hearings. They appeared to actually hate each other, though they were alike in many ways.

Kennedy was confident he could take down Dave Beck and Hoffa. He thought Hoffa was more sinister, considering his ties to men like Johnny Dio, the man responsible for the blinding acid attack on journalist Victor Riesel. His allies in the New York police had given RFK wiretaps of Dio and Hoffa making deals concerning “paper locals” that would be used to help Hoffa seize power from Beck in the upcoming 1957 Teamster election.