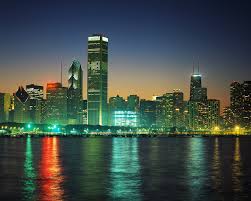 After his gangland diplomacy was personally responsible for staving off a brewing dustup between a young crew of Cicero mobsters and the Chicago Outfit pecking order last year, Salvatore (Solly D) DeLaurentis was able to solidify his post as the crime family’s new acting boss.

Street sources in the Windy City tell Gangster Report that DeLaurentis assumed the mantle of power from Cicero mob chief Michael (Fat Mike) Sarno at some point in the past couple of years. Sarno is serving a 25-year federal prison sentence for racketeering. Fat Mike reportedly held on to acting boss duties the first portion of his time behind bars, sending orders through a series of intermediaries, many of whom were the up-and-comers causing the prior tension.

As first reported on Gangster Report last summer, Solly D smoothed over a previously-escalating dispute pitting a fresh-faced group of Sarno loyalists against traditional Chicago mob brass on the south side, west side and parts of their own Cicero powerbase, in the wake of Fat Mike’s imprisonment. Tensions appeared to be bubbling to the surface towards the end of 2013 and into 2014 until DeLaurentis squashed the beef. Most of those making waves were guys Sarno personally brought into the fold and may have formally inducted into the Outfit

“Solly showed a lot of people that he was the right man for the job when he kept things from getting really sticky around here and that’s where things were headed,” one member of the Chicago underworld said. “It could have gotten very bad, very serious and very quickly. He knew what to say to both sides and calmed everyone down. Back in his younger days, he probably would have just started killing people himself and asking questions later. Now, he’s more of a diplomat. He don’t have to act tough, cause everyone knows what he’s capable of.”

DeLaurentis, 76, is stationed in north-suburban Lake County and rose in the mob ranks under Cicero capo Ernest (Rocky) Infelise. The two were indicted together, along with Sarno, in the 1990 Operation Good-Ship Lollipop case, ensnaring a large chunk of the Chicago mafia’s Cicero crew, which oversees activity in both Lake and McHenry Counties and resulted in convictions across the board. The well-liked and highly-respected Solly D was released from prison in 2005 and reassumed duties in charge of the Lake County rackets, per Illinois State Police records.

Within the Good-Ship Lollipop bust, DeLaurentis was tied to, but never convicted of, the grisly gangland slaying of stubborn Chicago sports-gambling specialist Hal Smith three decades ago. For the years leading up to his February 11, 1985 murder, Smith, the biggest independent bookmaker in the Midwest at the time of his death, was resisting shakedown efforts by Infelise’s Cicero mob contingent. His tortured and mutilated corpse was found in the trunk of his car in the parking lot of the Arlington Heights Hilton.

Months before he was killed it was revealed via a federal search warrant for an Outfit-backed auto repair business that in 1982 and 1983 Smith had provided information to the government relating to DeLaurentis’ criminal affairs. One interaction between Smith and Solly D at a Lake County restaurant in late 1984, witnessed by FBI agents, degenerated into a shouting match where table items, racial slurs and chilling threats of physical harm were hurled back in fourth.

Authorities believe DeLaurentis helped plan the Smith hit, but wasn’t there when it took place. Infelise and three of his enforcers Robert (Bobby the Boxer) Salerno, Robert (Bobby the Gabeet) Bellavia and Louis (Louie Tomatoes) Marino were convicted in connection with Smith’ murder, based primarily on the testimony of turncoat Outfit-associate William (B.J.) Jahoda, the man tasked with delivering the flashy 48-year old handicapper and master money-launderer to his slaughter.

A close friend and former “partner in crime” of Solly D’s, Louie Tomatoes Marino was released from prison Halloween morning (October 31, 2014). Infelise died behind bars. Bellavia will be let out next year. Marino is alleged to be currently advising DeLaurentis on matters of leadership.

DeLaurentis had his name recently pop up in the extortion case facing reputed Lake County mob lieutenant Paul Carparelli. On an FBI bug in 2013, Carparelli is heard bragging to a friend that, “Solly D and (unknown DeLaurentis associate) gave me 10 thousand dollars to throw a guy a beating, they wanted his legs broken” He’ll be going on trial this year in a case where four of his co-defendants have already either been convicted at trial or pled guilty to the charges. 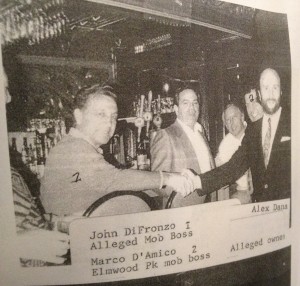 the past decade and at one-time served as the Chicago mafia’s overall street boss, last year, and Andriacchi chose Matassa, Jr to be his day-to-day front man. D’Amico, 79, replaced Alphonse (Al the Pizza Man) Tornebene following Tornebene’s death of natural causes in the spring of 2009.

Cataudellla was Fat Mike Sarno’s top lieutenant while Sarno was acting boss of the Chitown mob from April 2005 until he was jailed in December 2010. Sarno had grabbed the leadership reins from James (Jimmy the Man) Marcello, imprisoned for life via the Operation Family Secrets case.

Early on in Sarno’s tenure as a Don, he butted heads with Marcello’s right-hand man, Anthony (Little Tony) Zizzo. By Labor Day 2006, as Marcello sat behind bars awaiting trial in Family Secrets, Zizzo disappeared. He’s presumed to be dead and Sarno is considered by authorities the prime suspect.

Sammy Cards Cataudella was convicted in a RICO case in 1988 and might have been the target of a revenge slaying ordered by Zizzo loyalists that went awry less than three months after Zizzo went missing.

A “civilian” named Gerry Dhamer was slain in a professional hit, shot-gunned to death, in front of his home in November 2006 on the same street in suburban Park Ridge, Illinois Cataudella had once lived. Dhamer, 48, resided at 623 North Broadway, down the block from the Cataudella-owned property at 632 North Broadway, which was being lived in by his son and daughter-in-law at the time Dhamer was killed. Investigators strongly suspect Dhamer’s homicide was a result of mistaken identity and the assailant mixing up the addresses.

Joe the Builder Andriacchi has reportedly held numerous positions in the Chicago Outfit over the years – from capo, to acting boss/street boss to underboss and now consigliere. Known for his gangland savvy and ability to live by the old hoodlum adage ‘make money, not headlines’, he hasn’t taken a collar since 1968 when he was jailed for three years on a burglary charge.

For the past two and a half decades, Andriacchi has looked after mob activity on the north side. Upon his elevation into the upper level of mafia management in the Second City, the north side crew was merged with the west side crew, headquartered at the corner of Grand and Ogden Avenues. Silently invested in a string of successful downtown eateries and nightclubs, he’s known to frequent popular haunts like Tavern on Rush, Carmine’s, Rosebuds, the Frog Bar, Morton’s and Gibson’s.

Matassa, Jr. was groomed in the ways of the mafia by Andriacchi and deceased north side mob czars Vincent (Innocent Vince) Solano and Michael (Mikey the Fireplug) Glitta. As a young goon, he helped tax and regulate the downtown Rush Street nightlife district, the Old Town neighborhood and the series of adult theatres and bookstores that surrounded the area throughout the 1970s and 1980s.

His father and namesake was a bodyguard and driver for iconic Chicago Don Sam Giancana. Glitta was his cousin. In 1999, Matassa, Jr. was booted from his job as a union executive in the LIUNA because of his affiliation to organized crime.

Pudgy’s name was tossed around in the case of disgraced U.S. Marshal John Ambrose just a few years ago. Ambrose was convicted in 2009 of passing information to the Chicago mob regarding the whereabouts of wiseguy and hit man-turned-witness-for-the-government Nicholas (Nicky Slim) Calabrese in the years leading up to his testimony at the epic Operations Family Secrets trial. Calabrese’s first-hand accounts on the stand of life and bloodlust in the Illinois mafia resulted in the conviction of several Outfit dignitaries, including his brother and south side crew chief Frank (Frankie Breeze) Calabrese, acting boss Jimmy Marcello and consigliere Joseph (Joey the Clown) Lombardo.

According to Chicago Crime Commission files, Ambrose shuffled intelligence on Nicky Slim to Matassa, Jr., who then gave it to foot-soldier Michael (Big Mickey) Marcello, Jimmy the Man’s brother.

“Johnny’s guys gave him a list of names, he has someone in the government,” Big Mickey Marcello was recorded telling his brother, at the time serving a previous racketeering pinch in a Michigan federal prison.

In terms of captains in the Outfit right now, sources on the street and in law enforcement, peg James (Jimmy I) Inendino looking after Cicero, Albert (Albie the Falcon) Vena, overseeing activity on Grand Avenue, Franks (Tootsie) Caruso being in charge of the south side-Chinatown crew and Rudy (The Chin) Fratto recently taking Peter (Greedy Petey) Di Fronzo’s job as skipper of Elmwood Park.

Like his big brother No Nose, Greedy Petey is alleged to have voluntarily gone into semi-retirement from daily mob life. D’Amico didn’t want to step down as consigliere, per sources, however was told he had to give the everyday reins to Matassa, Jr by DeLaurentis and Andriacchi.

Solly D, Rudy Fratto and Matassa, Jr were all made together in a Father’s Day 1988 ceremony that was held in the basement of the Como Inn on Milwaukee Ave.

According to FBI records, D’Amico and Matassa, Jr. don’t get along, dating back to bitterness over the fact that Pudgy received his button before D’Amico, who felt he deserved being included in the 1988 induction instead of Matassa, Jr.