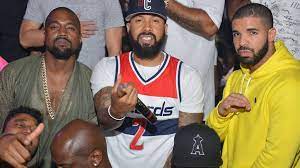 October 29, 2021 — Transcendent rapper Drake and revolutionary hip hop music label president James Prince have joined rap mogul Kanye West in his quest to free Gangster Disciples boss Larry (The Chief) Hoover. West has been campaigning for Hoover’s release from federal prison since 2018 when he visited the White House to brief President Donald Trump on the situation.

Hoover, 70, is one of America’s most powerful crime lords, according to the federal government. He’s been incarcerated since 1973 for ordering the murder of Chicago drug dealer William (Pookie) Young over a heroin deal rip-off. Six years before that, he founded the Gangster Disciples on Chicago’s Southside and soon grew it to a national presence in the world of street gangs and African-American organized crime. The Feds nailed him for racketeering and extortion from behind bars in the 1990s.

Prince’s Rap-A-Lot Records out of Houston was at the forefront of the Gangster Rap genre and the founder of the Southern Rap scene. He announced his collaboration with Drake and West on Hoover’s behalf on his social media accounts last week. Drake’s smoothly-crafted pop-infused brand of rap changed the landscape of the music industry in the 2000s, following in the footsteps of Jay-Z and showing you don’t need a label deal to become a major player in the industr

Kanye West is from Chicago. On his recently-released and much-heralded Donda album, West features spoken word sequences from Hoover’s son, Larry Hoover, Jr. The elder Hoover’s GDs are now in more than a dozen states and number in the tens of thousands. The feds believe he continues to call shots for the GD organization in prison.

Drake was raised in Toronto, Canada but has embraced American crime figures in his lyrics, frequenting name-checking drug bosses, like Hoover and members of the Black Mafia Family in his songs. Prince’s music label launched the Geto Boys and Southern Rap legend Scarface’s career.