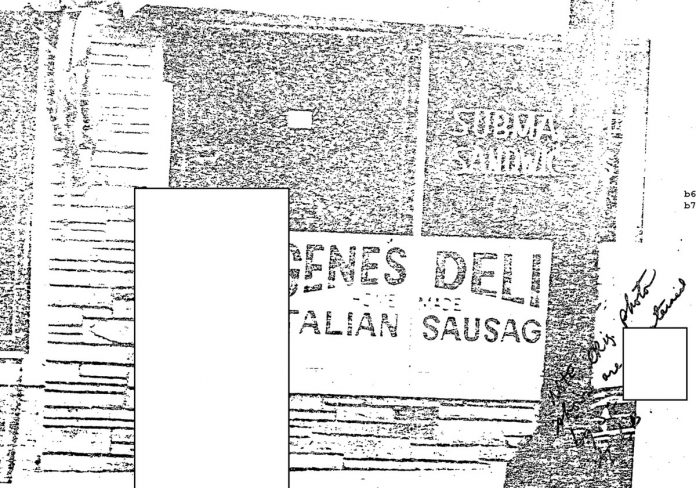 At that point in time, DiFronzo, who died of natural causes in May 2018, was the captain of the Outfit’s Elmwood Park crew. He became the Chicago mafia’s overall boss in the early 1990s, according to the Chicago Crime Commission. Notoriously slippery and savvy in his gangland affairs, DiFronzo’s regime was respected nationwide and the man himself was famous for his razor-sharp business instinct in the boardroom, political shrewdness on the street and money-making ways in both.

Here are some of the highlights of the feds’ near-400 page document dump on No Nose DiFronzo to the Chicago Sun-Times and Gangster Report:

In December 1981, FBI agents observed Outfit gambling bosses Dominic (Large Dom) Cortina and Donald (The Wizard) Angelini visiting DiFronzo at his home in River Grove. Cortina and Angelini controlled the Chicago mob’s network of bookmakers and backdoor casinos and coordinated logistics for the different gambling wings of the crime family. In March 1982, informants told the FBI that DiFronzo’s sports gambling and loan sharking businesses were being handled by Marco (The Mover) D’Amico out of the S&A Club on Diversey Avenue in Elmwood Park.

DiFronzo kept a tight circle and a tight schedule. He began his day arriving between 8:00 and 9:00 a.m. at Gene’s Deli on North Harlem, owned by his driver and right-hand man Eugene (Lefty) Cacciatore. He then made his way to his office at Elmwood Motors on W. Grand Avenue at around 10:30 a.m. Some days, he would make appearances at D&P Trucking & Construction on N. Clinton Avenue and United Delivery Service on N. Otto Avenue, in the afternoons. FBI records indicate DiFronzo maintained silent ownership interests in Elmwood Motors, D&P Trucking & Construction and United Delivery Service, as well as dozens of other legitimate business fronts and ventures.

D’Amico would become DiFronzo’s consigliere in the 2010s. Greedy Petey would alternate between Johnny No Nose’s underboss and acting boss during that time period. Both D’Amico and the younger DiFronzo succumbed to the COVID-19 virus last year.

In June 1982, FBI agents observe Outfit underboss John (Jackie the Lackey) Cerone meeting with DiFronzo at Gene’s Deli. DiFronzo is driven to the meeting by Chevy Pete Destito. The following month, FBI agents followed DiFronzo to a another meeting with Cerone, this one held in the backroom at the Rosanova Tailor Shop on North Avenue, owned by Outfit soldier Luigi (Lou the Tailor) Rosanova, a former small-time Chicago Bears football player turned mob enforcer and labor union liaison. The discussion at Lou the Tailor’s place of business was allegedly regarding Red’s Grill in Stickney, Illinois, the pick-up and drop-off location for DiFronzo and Cerone’s loan sharking operations, per CCC records.

In a March 1983 debriefing, one FBI informant told agents that Cerone was grooming DiFronzo to take over the whole Outfit in the future. According to the informant, DiFronzo watched over Cerone’s rackets when he went away to prison in the 1970s and would do the same if Cerone had to go to prison in the Las Vegas casino-skimming Operation Strawman case.

That’s exactly what happened. Cerone served ten years in prison on the Strawman case and died of cancer in the days after he was set free in the summer of 1996.

That same informant told FBI agents that DiFronzo would be possibly sent to Las Vegas in the coming years to replace the Outfit’s then going-off-the-rails west coast crew boss Tony (The Ant) Spilotro. DiFronzo never succeeded Spilotro in Vegas, however Spilotro was killed in 1986 for his rogue behavior and DiFronzo was linked to the homicides of Tony the Ant and his baby brother Mickey, though never faced charges in the case when they were finally brought two decades later in the epic Operation Family Secrets case.

The brutal Spilotro brothers slayings were depicted in the 1995 film Casino, starring Oscar winner Joe Pesci as a character based on Tony the Ant. Instead of DiFronzo replacing Spilotro in the desert, Outfit bosses sent Dom Cortina and Donnie Angelini — a man some called the No. 1 handicapper in America— to clean up the mess Spilotro had made on the Strip. Cortina and Angelini each passed away of natural causes in 1999 and 2000, respectively.