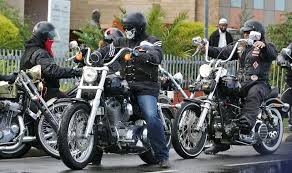 The Hells Angels and Mongols have conducted one of the deadliest biker wars of recent history.  This is from the Nat Geo special “We Kill the Hells Angels”

The following story was published on Aging Rebel

This story was published on September 22 and was edited on September 23. The original story remains intact and is plain text. Additions to the story appear in italics. In general, informed readers have been offended by the story because they believe it overstates any animosity that may exist between the Mongols Motorcycle Club and the Hells Angels Motorcycle Club. One trusted correspondent wrote “I chose to disagree with Rebel and this article because of how far off base it is.”

If you live on the West Coast it might be a good time to leave your support tee-shirts in the dresser. A series of violent and very public clashes between members of the Hells Angels Motorcycle Club and the Mongols Motorcycle Club has become impossible to ignore.

The latest incident was a running gun battle between members of the two clubs that left one man dead and two others wounded.  The gunfight broke out on the 15 Freeway in Riverside County south of Corona near where the Hells Angels Motorcycle Club was founded. All three victims were taken to Riverside Community Hospital where one of the wounded men was treated and released.

Persons this page considers to be informed have taken exception to the phrase “running gun battle.” There were shots fired and published accounts, as well as numerous correspondents, described the freeway shooting as taking place between members of the two clubs. According to one commenter, “There was no ‘shoot out’ in Corona, someone fired into a pack of motorcycles and a friend of one of the clubs lost his life.” The Aging Rebel believes the commenter is right and the initial description of the event published here is wrong.

The shooting occurred about 6:30 p.m. Saturday night and caused the southbound lanes of the 15, the highway that links Los Angeles and Las Vegas, to remain closed until Sunday morning.

The Riverside County shooting came eight days after a very violent brawl and gunfight between members of the two clubs at Bar USA in Reno, Nevada about 11:45 p.m. on September 12. Witnesses described the bar as significantly damaged.

Numerous informed sources have written to say the fight was not between the Mongols and the Angels, that the brawl was not “very violent” and that the damage to the bar was minimal.

Bar USA is about nine blocks from the Truckee River and downtown Reno. It is the main registration point for two poker runs sponsored by the Nevada Nomads charter of the Hells Angels during the annual Fall Street Vibrations motorcycle rally. The runs are the Best Breast in the West Run which includes stops at gentlemen’s clubs and the Cat House Run with scheduled stops at brothels.

The Street Vibrations Rally begins this Wednesday and continues through the weekend.

Since the publication of this story yesterday, multiple sources have told this page that the violence involved a sport bike club and had nothing to do with either The HAMC or the Mongols MC. This page regrets the implication that this incident did.

On March 22, according to published reports, a knife fight between members of the two clubs by the side of the 15 Freeway in Temecula in Riverside County California resulted in injuries to two men. According to a Riverside County Sheriff’s Department spokesman. One victim “drove himself to a local hospital, where he was treated for superficial stab wounds and released.” A second victim collapsed and crashed on a freeway off ramp. He was transported to a hospital by ambulance.

The Sheriff’s Department spokesman described the knife fight as “a road rage incident.”

One commenter wrote: “These were isolated incidents, that in no way a responsible reporter would try and make a connection between.” The commenter is right and this page was wrong.