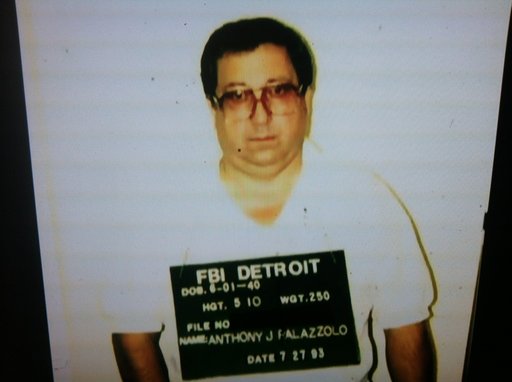 The future is now for the Detroit mafia.

The entirety of what had been dubbed “The Future Big 3” by Family administrators is finally in place with the ascension of Motor City mob vet Anthony (Tony Pal) Palazzolo to the position of consigliere in the past few months.

Palazzolo’ appointment to the post by recently-inaugurated boss Jack (Jackie the Kid) Giacalone comes on the heels of the syndicate’s previous consigliere Dominic (Uncle Dom) Bommarito stepping away into retirement.

Giacalone and his underboss Anthony (Chicago Tony) La Piana assumed their jobs atop the Family’s power structure earlier this year. Tony Pal, also sometimes called “The Butterfly,” was always slated to join them after Bommarito helped ease the transition, which, according to well-placed sources, he’s successfully done.

The 74-year old Palazollo has long overseen rackets in the city’s Downriver area, a cluster of working class suburbs located directly south of Detroit, as well as the Michigan mob’s interests in Canada. His father, Salvatore (Sammy Pal) Palazzolo, aka “Sammy Powder” was a drug lieutenant in the local mafia, working under longtime consigliere Giovanni (Papa John) Priziola (1936-1979).

Tony Pal came up in the local underworld groomed by capo Peter (Bozzi) Vitale, the mob king of the city’s Greektown neighborhood and entertainment district throughout the mid-to-late 20th Century. He was named capo of Vitale’s crew in 1998 upon his release from prison on charges of running a money-washing business for criminals and Vitale’s death of natural causes at 89 years old the year prior.

“They call him the Butterfly because he’s very elusive, very shadowy,” retired FBI agent Bill Randall said. “Tony Pal was one of those guys that was difficult to keep tabs on, always very aware of our presence and that’s why we had to bring in a guy from Canada to finally nail him back in the 90s (Palazzolo’s money-laundering bust was after his crew was infiltrated by an undercover Canadian drug cop).”

Last year, deposed underboss and former acting boss Anthony (Tony Z) Zerilli met with the FBI and implicated both Vitale and Palazzolo as the ones that lured notoriously-slain Teamsters boss Jimmy Hoffa to his slaughter. Hoffa had a falling out with his associates in the mob and went missing in July 1975, last seen leaving a suburban Detroit restaurant’s parking lot in a vehicle with a number of other individuals in it.

Zerilli, who had a falling out with Tocco that led to his demotion after a joint-1996 racketeering bust entitled Operation Gametax, told the FBI that Bozzi Vitale and Tony Pal picked Hoffa up at the Machus Red Fox restaurant in Bloomfield Hills, Michigan and drove him to a piece of farm property in Oakland Township (roughly 20 miles away), where Palazzolo did Hoffa in with several smacks to the head with a shovel, at which point him and his mentor Vitale buried him there.

The FBI searched the property in the summer of 2013 and came up empty. Federal audio surveillance at Palazzolo’s Eastern Market-based headquarters, the Detroit Sausage Company, in 1992, caught Tony Pal bragging about his involvement in Hoffa’s disappearance.

The Giacalone-La Piana-Palazzolo triumvirate was pegged as the future leadership of the Detroit mafia for at least the past decade, according to sources on the street and in law enforcement, hand-selected by longtime Don Giacomo (Black Jack) Tocco, who died in July of natural causes at 86 following 35 years on the throne, passing away as the longest-tenured Godfather in America.

Tocco took the reins of the Family on an acting basis around 1970, before being tapped to head the syndicate on an official basis in 1979 at a top-secret gathering of capos at the Timberland Game Ranch in Dexter, Michigan near Ann Arbor that was observed by a photo-snapping FBI surveillance team. The Feds were tipped off to the meeting by Black Jack’s then-driver, bodyguard and cousin Anthony (Fat Tony) Zito (a confidential informant for the Bureau for decades).

Upon his release from prison on the Operation Gametax RICO conviction in 2002, Tocco went about laying the groundwork for the future and what the Family brass was going to look like when he was gone.

Giacalone, 64 and the son of former underboss Vito (Billy Jack) Giacalone and the nephew of street boss Anthony (Tony Jack) Giacalone, was being schooled for his role as an eventual Godfather dating all the way back to his early days on the streets in the 1970s and 1980s. He took his uncle’s place as syndicate street boss in 2000 (Tony Jack died of cancer in 2001) and was named acting boss of the Family sometime in 2012. Billy Jack died that same year of old age.

La Piana, 72 and an alleged expert white-collar gangster and labor union powerbroker, was Tocco’s protégé and a nephew of his via marriage. Some say he’s the real puppet-master behind Giacalone, content with Jackie the Kid being out in front taking all the exposure in the boss’ seat.

At the end of Bozzi Vitale’s life, he pushed Jack Tocco to consider Tony Pal for a future administration post, according to Vitale’s Detroit Police file. Around the time Tocco’s brother Anthony (Tony T) Tocco stepped down as consigliere in the late 200os and Uncle Dom Bommarito, 80, took his spot, Palazzolo was chosen by Black Jack as Bommarito’s successor, according to sources on the street.

Palazzolo began popping up on FBI agents’ radars in the early 1970s, seen driving Bozzi Vitale and occasionally his brother and fellow capo Paul (The Pope) Vitale, around town and escorting them to a series of important mob get-togethers. His name surfaced in the investigation into the 1972 murder of Vitale crew member Gregory (Little Pete) Katranis, fingered by informants for helping Katranis’ own brother and Vitale enforcer Michael (Greektown Mike) Katranis and Giacalone crew members, Ronald (Hollywood Ronnie) Morelli and Robert (Bobby the Animal) La Puma plan and carry out Little Pete’s execution.

Greektown Mike and Little Mike were the sons of Vitale brothers’ lieutenant and strong-arm Petros (Pete the Greek) Katranis. Little Pete angered his mob superiors by freelancing in the local drug and extortion trade and then pushed his luck too far by sucker-punching Morelli, the Giacalone brothers’ protégé and Jackie the Kid’s childhood idol, in a bar room fight over a woman. Less than two weeks later, he was dead.

Morelli died of a heart attack in prison in 1986, three months away from being released. Today, Greektown Mike runs a small crew of hoodlums centered in the Vitale brothers’ old territory which now inhabits a giant hotel and casino.

In 1983, Tony Pal and Detroit LCN “button man” Salvatore (Sammy G) Giordano, brother of former St. Louis mob boss Anthony (Tony G) Giordano, were convicted in federal court of heading a gambling and extortion ring. Then ten years later in the summer of 1993, Palazzolo got caught up in a joint undercover operation between the FBI in Michigan and the cops in Canada where he was nailed offering his money-laundering service to a wired-up undercover Canadian narcotics detective posing as a drug dealer.

“This is my city, nobody does anything in this town without me or my guys giving the go-ahead,” Tony Pal bragged to the Canadian cop in a posh downtown Detroit hotel suite.

Richard Convertino, the U.S. Attorney that prosecuted Palazzolo in the money-washing case, believes that the man they call the Butterfly relishes his status in the mob.

“Tony loves being a gangster, it’s in his DNA,” he said “You could see it at the way he carried himself at the trial and by listening to the bugs we had at Detroit Sausage Co. and the one the undercover was wearing. He doesn’t hide it.”