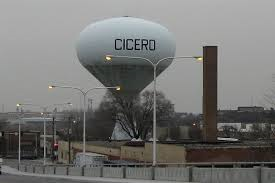 After more than a dozen years away from Chicago cooling his heels in a federal prison cell, Cicero capo Michael (Big Mike) Spano has returned to the City by the Lake. The 74-year old mob chief was recently transferred to a Chicago halfway house, a stone’s throw from the shores of Lake Michigan, to serve out the remainder of his sentence on racketeering charges related to his infiltration of the Cicero city government and the stealing of 12 million dollars in a series of elaborate insurance fraud scams.

Big Mike and his aide-de-camp John LaGiglio siphoned the cash from the notoriously mobbed-up town made famous as an Al Capone outpost during his bloody Prohibition Era reign by creating a company called Specialty Risk Consultants, which got the city insurance contract and was put in charge of processing all city employees’ claims – paperwork they then used to falsify further claims and pocket the money paid out (among other shady dealings).

Mentored for leadership in the underworld by deceased Chicago mafia power Ernest (Rocky) Infelise, Spano has been vocal while incarcerated that he intends on retiring from the mob upon his complete release, slated for June 2015. Jimmy Inendino is currently capo of the Outfit’s Cicero crew, according to the FBI and the Chicago Crime Commission, released from his sentence in the Cicero corruption and racketeering case in 2006.

“How sincere Spano is in his desire to leave life in the mafia behind remains to be seen in my eyes,” said one retired FBI agent that tracked the Cicero crew in the 1980s and 90s. “He’s a smart guy, he’s not just going to tell everybody his business unless he’s got

a reason. I hope he does hang it up. I’ll believe it when I see it, though. The guys in the Bureau will be watching him closely for sure, since relations in that crew right now are said to be a little shaky.”

Since the imprisonment of Michael (Fat Mike) Sarno, Spano’s direct successor as Cicero crew boss, a few years ago on racketeering charges, that faction of the Outfit is alleged to be in turmoil, with young, hot-tempered Sarno-loyalists butting heads with Inendino and the Di Fronzo brothers  – the Chicago mob’s semi-active Godfather John (Johnny No Nose) Di Fronzo, capo Peter (Greedy Petey) Di Fronzo and soldier Joseph (Joe Chong) Di Fronzo –  in the Elmwood Park crew.

Back in his early days on the street, Spano had joint-business interests in the trucking industry with whiz-kid Michael Cagnoni, a Chicago mob associate and extortion victim who was killed on June 24, 1981 by the Southside crew’s Calabrese brothers (Frankie Breeze and Nicky Breeze aka Nicky Slim), blown up in his Mercedes as he drove on a Windy City expressway on June 24, 1981. Cagnoni, 37, was slain after balking at paying an increase in his street tax for shipping produce from the West Coast to the Midwest and possibly stealing mob funds he was responsible for couriering.

Big Mike and his brother and fellow Outfit soldier Paul Spano, are alleged to have been the Chicago mafia’s “point men” with Cagnoni and said to have been the ones that delivered the message to him that his tribute payment was being raised, according to federal court documents related to the 2007 Operation Family Secrets trial. FBI agents snapped photos of Cagnoni going to meet with the Spano brothers and delivering them suitcases full of extortion money in cold, hard cash.

At the conclusion of that trial, Frank Calabrese was convicted of planting and detonating the bomb that killed Cagnoni, fingered on the stand by his own brother, Nick, the government’s star witness and the only made member of the Chicago Outfit to ever join Team U.S.A.

Chicago Crime Commission files indicate that when Rocky Infelise and most of his underlings were imprisoned in the early 1990s in the infamous “Good Ship Lollipop” bust, he selected Spano to take over as capo in his place.

Court testimony at Big Mike’s 2002 trial revealed that (1) Big Mike offered a million-dollar bribe to Illinois state officials in search of a pardon for Infelise, who had been hit with a life-sentence for racketeering and murder and eventually died in prison in 2005, (2) fleeced the widow of deceased Outfit capo James (Turk) Torello for $400,000 on bogus investments that he never repaid and (3) befriended a former IRS agent and named him his crew’s financial counselor.