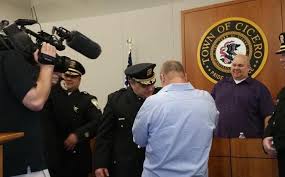 Nick the Badge, Cicero’s disgraced former police chief, presented his son with his new stripes in a ceremony held in the weeks prior to Thanksgiving that named Dominic Schullo the city’s Assistant Deputy Superintendent, the No. 4 man in the department which his dad once headed.

In a nutshell, The Badge pinned a badge on his kid (see photo above).

The elder Schullo, 67, was convicted in 2002 in a federal racketeering case alongside Chicago Mafioso Michael (Big Mike) Spano and then-Cicero Mayor Betty Loren-Maltese. They were nailed for stealing millions of dollars from the notoriously mobbed-up town’s coffers.

Big Mike Spano concocted the scam, creating an insurance company to siphon city funds from, while Schullo and Loren-Maltese provided access to civic contracts and looked the other way while the Outfit raided the proverbial cookie jar, taking a series of kickbacks from Spano and his mob crew.

Schullo did a decade in prison and was released in 2011. According to sources on the street and in law enforcement, Nick the Badge, is now a full-fledged mafia lieutenant and acting as an emissary on behalf of James (Jimmy I) Inendino, the reputed current capo of Cicero.

Inendino, sometimes referred to as “Jimmy the Ice Pick,” was a member of the infamous “Wild Bunch,” an elite, always-on-call crew of assassins from Cicero in the 1970s and 80s, used at the discretion of Windy City mob brass. He was caught up in the early-2000s bust with Spano, Schullo and Loren-Maltese, convicted of trying to bribe public officials and helping Spano launder portions of the money they were stealing.

Schullo and Inendino have been observed by FBI agents meeting together on a “semi-regular basis,” per sources in the Chicago Police Department and Chicago Crime Commission, going back a couple years now.

Considered one of the largest loan sharks in the state of Illinois, Jimmy I was released from serving a seven-year prison sentence in October, 2008. Less than six months later, then-Cicero capo and overall Outfit street boss, Michael (Fat Mike) Sarno, was indicted on racketeering charges related to a gambling, robbery and arson ring. Sarno had taken over the region from Spano when Spano was jailed.

Upon Sarno’s 2010 conviction and incarceration, Inendino was tapped as the crew’s new capo, according to the FBI. Smacked with a 25-year prison term for his misdeeds, 57-year old Fat Mike is cooling his heels in a Virginia federal correctional institute, still considered by authorities in Illinois law enforcement the “top person of interest” in the 2006 disappearance and mob slaying of his gangland rival, Anthony (Little Tony) Zizzo, the last-known Italian mafia hit in the area.

Spano, 74, was recently transferred to a Chicago halfway house after a dozen years in a Milan, Michigan federal correctional facility and is slated to be let free this upcoming summer. When he was rising through the ranks of the Outfit in the 1970s and early-80s, Spano served as a driver for one-time Cicero capo Ernest (Rocky) Infelise.

Big Mike ran the Cicero crew in the 1990s, succeeding Infelise after he was locked up on racketeering and murder charges (Infelise died behind bars in 2005). During his incarceration, Spano has reportedly been telling those close to him he intends to retire from the mob when he is released in June 2015.

“He (Schullo) paid his time and repaid his obligations, I’m proud to be his friend,” Cicero Police Superintendent Ray Hanania said. “All he did was be by his son’s side and that’s something every father should do.”

The town of Cicero has long been tied to Chicago mob activity, dating back to the days of the Al (Scarface) Capone mob of the Prohibition Era. Capone set up shop in the city’s Hawthorne Hotel.

Rumors of mafia influence in the city’s establishment still circulate – always have, probably always will.

Loren-Maltese’s husband was deceased Outfit handicapper, Frank (Baldy) Maltese. The man that now holds Loren-Maltese’s former job, Mayor of Cicero, Larry Dominick, has been investigated by the FBI for his links to organized crime in Chicago in the decade since his election, although no official charges have ever been filed.

One organized crime associate connected to the Cicero crew thinks Schullo might be rubbing some people the wrong way with the manner he’s been seen throwing his weight around lately.

“The guy (Schullo) is a loudmouth,” he said. “He thinks because he did his time and Jimmy I suddenly gives him the time of day, that that means he’s a somebody. Well, maybe he is or maybe he’s just a jagoff that Jimmy plays cards with, but either way he’s got people talking.”