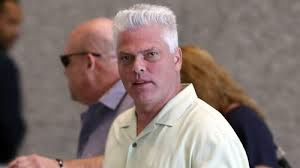 The’ G ‘ in Chicago has its eyes focused on mob activity in suburban Lake County.

The Windy City mafia’s Lake County crew, a region under the auspice of the syndicate’s Cicero regime, is facing a well-stocked legal assault by the FBI .

Four reputed members of the crew were recently convicted on federal extortion charges – two pled guilty in September, two were convicted at trial in October.

Their alleged boss, Itasca, Illinois mobster Paul Carparelli, 45, and two others, will be going on trial in early 2015. Carparelli is believed to be a lieutenant of Lake County Outfit chief Salvatore (Solly D) DeLaurentis, one of the major modern-day power brokers in the Chicago underworld, according to the Feds.

On September 23, George Brown and Vito Iozzo, a pair of hulking Carparelli strong-arms, pled guilty to extorting multiple businessmen on behalf of Mark Dziuban, who authorities claim works for Carparelli. Dziuban, owner of a printing company called American Lithos in Carol Stream, Illinois, sought out Carparelli for advice on which enforcers to use in collecting tribute, the indictment alleges, and sent them around the country to intimidate debtors and pick up extortion payments in Wisconsin and New Jersey, in addition to those in Chicago.

Brown, 51, admitted to going into the office of the owner of a granite company and assaulting him.

“Hey, motherfucker, this aint going away, you pay what you owe,” the 300-pounder said while pummeling his victim and Iozzo, 43, stood behind him blocking the doorway, arms folded and glaring.

To  further emphasize his point, he nodded to Patrick White, another Lake County crew enforcer, and White kicked the guy in the stomach as he laid on the ground writhing in pain. Iozzo and Brown are both looking at possible seven-year prison sentences.

Frank Orlando, 47, and Robert McManus, 43, associates of Dziuban’s and Carparelli’s, were found guilty at trial two months ago as acting as the go-between for the two  and their muscle (Brown, Iozzo and White) in the extortion plots. Carparelli, Dziuban and White all pled not guilty to the charges and will stand trial in February.

Carparelli was caught on an FBI wire in January 2013 talking about doing muscle work himself directly for the 76-year old DeLaurentis, someone Windy City mob watchers tag the syndicate’s next boss or consigliere.

“Solly and Mickey D gave me $10,000 to throw that guy a beating” he was heard saying. “They wanted his legs broke.”

A 2011 bug intercepted Carparelli offering an underling $2,000 to deliver someone else a beating in order to square away some quick holiday cash.

“It’s easy fucking money, you just catch the kid outside, beat the shit out of him, bust his fucking arm, his jaw and then leave…..It’ll take you five minutes. That’s your Christmas money right there,” he said.

Carparelli hasn’t been shy in telling associates about his ties to and work for the Chicago mafia.

“I’ve been with the Outfit (local slang for the mob in Illinois) my whole life, I’m not about to change now,” he was caught on tape telling a friend. “This is what I’m made of and this is where I come from and I’m fucking proud of it.”

DeLaurentis was a protégé of Cicero capo Ernest (Rocky) Infelise and took over the rackets in Lake & McHenry Counties after Joseph (Black Joe) Amato retired in the late 1980s. Prior to Amato stepping aside, he and DeLaurentis butted heads over control of the area’s gambling industry. Chicago Crime Commission files peg DeLaurentis with going on a fire-bombing campaign against Amato’s gambling houses and Amato’s lieutenants – Black Joe’s driver, Windy City wiseguy Nick Sarillo survived being blown up in a 1982 car-blast on a Wauconda, Illinois road, allegedly on DeLaurentis’ orders. The CCC records state that the barrage of explosions were sanctioned by Rocky Infelise and the beef was eventually squashed at a 1983 sitdown called by then Chicago mob street boss Joseph (Joey Doves) Aiuppa.

Implicated in helping arrange the gangland murders of rogue Chicago bookies Robert Plummer and Hal Smith, Solly D was formally inducted into the Outfit at a Fathers Day 1988 ceremony and served 16 years in prison (released in 2006) on racketeering charges resulting from the FBI’s takedown of Infelise’s crew in 1990, known as the “Good Ship Lolli-Pop Bust.” Plummer was killed at a Lake County mansion-turned underground casino for high-rollers in the spring of 1982. Smith openly feuded with DeLaurentis and was killed in 1985.

“You’re from Chicago, right? Then , you pay, nobody skates for free” DeLaurentis was recorded telling a shakedown victim in 1989.

Rocky Infelise, a military veteran and former paratrooper in WWII, died behind bars in 2005. The following year, Solly D was sprung from the can and returned to the street to take his seat atop the north-suburban mob rackets in Chicago. There have been recent rumblings that DeLaurentis could be in-line for the boss’ chair and may be “street boss” right now.