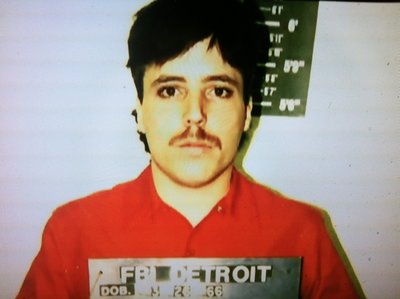 At one point in time viewed as an up-and-comer in the local mafia syndicate, earning his “button” before his 30th birthday, Bommarito fell out of favor with a number of underworld factions in the Motor City later in his life, leading to his untimely demise with a needle in his arm and reputed a “hot-dose” of heroin coursing through his veins on January 20, 2007.

Bommarito was the son of former capo Frank (Frankie the Bomb) Bommarito, 85, and currently still running the streets in a solider-capacity. The FBI has heard reports that the younger Bommarito’s death was ordered by then-Detroit mafia underboss Vito (Billy Jack) Giacalone, his father’s best friend and the man who sponsored him for membership into La Cosa Nostra at a March 1995 ceremony and carried out in typical Detroit-LCN “veiled style” (throughout the years a series of local gangland hits have been staged to appear as suicides and overdoes).

Per law enforcement files and sources in the local mob, in the months leading up to Bommarito’s death, Giacalone was heard “motherfucking Carlo up and down, calling him a snitch.” In the early-1990s, both Bommaritos and Carlo’s close pal, John (Crazy Johnny) Pree, were Billy Jack’s primary representatives on the street. Carlo and Crazy Johnny were caught collecting mob-backed gambling and loansharking debts and committing arson and home invasion-scams.

Tapped with being the Detroit mob’s liaison to the local black drug gangs and aiding in his dad’s liaison duties with the area motorcycle gangs and an independent Albanian strong-arm wing, Carlo began battling an increasingly-worsening narcotics addiction and stealing money from the Italians’ joint rackets with the blacks, bikers and Albanians.

As a result of his skimming the till and the rumors that he was informing, Billy Jack was taking heat and according to police reports, sought and received Frankie the Bomb’s permission to put out the contract on 41-year old Carlo’s head. The elder Bommarito served as capo of Giacalone’s longstanding Eastside crew from 1998 until Billy Jack died in 2012 when he was demoted by Giacalone’s son, Jack (Jackie the Kid) Giacalone, the Detroit mafia’s new Godfather.

Caught in the middle of a colossal-sized feud between then-Detroit mob boss, Giacomo (Black Jack) Tocco and his underboss and first-cousin, Anthony (Tony Z) Zerilli, Jerry the Blade was Tony Z’s protégé and murdered for his allegiance to the deposed mafia prince, among other indiscretions, on August 13, 2002. In the weeks preceding his grisly demise, Bianchette saw his mentor and protector, Tony Z, sent to prison on a racketeering conviction, had a personal-protection order issued against him by a fearful debtor and reportedly got into a public spat with Jackie (Jackie the Kid) Giacalone, at that time the Family’s street boss.

Tocco and Zerilli fell out over their 1996 RICO bust (called “Operation Gametax”), which Tocco blamed Zerilli for due to a big chunk of the evidence in the case coming from missteps on Zerilli’s watch. Tocco was convicted in 1998, Zerilli had his attorneys hold off his trial for another four years, during which time Tony Z reshuffled his crew. With his longtime right-hand man, Jack (The Hulk) Gianosa, battling cancer (he would die in 2003), Zerilli put Bianchette, an ambitious street thug who he had met through his grandson, in charge of his collections and intended on having him look after his various rackets while he was in prison serving his sentence.

According to law enforcement records, informants told the FBI that Tocco demoted Zerilli from his underboss post immediately after he was found guilty on July 30, 2002 and sanctioned the hit on Jerry the Blade two weeks later for Bianchette’s wild behavior and as a message to his incarcerated cousin that his reign was over.

Just three days after Tony Z was locked-up, Bianchette got into a physical altercation with a local restaurant owner that had borrowed money from Zerilli and believed the debt would be lifted with him going away. Per a Macomb County Sherriff’s Department report, Bianchette pulled a mini-hatchet he was known to carry, put it to the guy’s throat and threatened to kill him if he didn’t repay what he owed. The restaurant owner filed a Personal Protection Order against Jerry the Blade in Macomb County Circuit Court Aug 3.

The night of August 7, Bianchette was allegedly approached by Jackie Giacalone at a local bar and admonished for his assault of the restaurant owner and “making too much noise,” according to sources present at the confrontation. Giacalone informed Jerry the Blade that him and Tony Z “were through,” leading Bianchette to curse at Jackie the Kid and storm away. On August 13, while attending a wedding, Bianchette received a call on his cell phone summoning him to an after-hours meeting at a Macomb County construction site. When he arrived, he was shot-gunned to death. Nobody has ever been arrested or charged in the crime.

Another possible New Millennium mob hit from the Motor City underworld was the June 19, 2001 murder of John (John John) Jarjosa, Jr. in Southfield, mere feet from the Detroit city limits. Sentiment is mixed on whether Jarjosa, Jr’s slaying was mafia-related or not. What is known is that he was the son of convicted Detroit mob associate John (JJ) Jarjosa, Sr. and he was killed in a professional hit, boxed in at a traffic light on 8 Mile and filled with bullets as he sat helpless behind the wheel of his friend’s sports car, heading for an early-afternoon workout at a local gym.

At the time of John John’s death, his dad JJ was in prison serving a sentence on the same ’96 Operation Gametax collar that ensnared Tocco and Zerilli. Both Jarjosas were strip club owners and JJ was convicted of shaking down fellow strip club owners on behalf of the mob, passing the extortion proceeds to Paul (Big Paulie) Corrado, Tocco’s and Zerilli’s nephew.

Police documents related to the case reveal that Jackie Giacalone and Giacalone’s top advisor Allen (The General) Hilf were heard telling government informants that they believed that the elder Jarjosa may have gotten loose lips in front of a federal grand jury he was called in front of before the indictment came down.