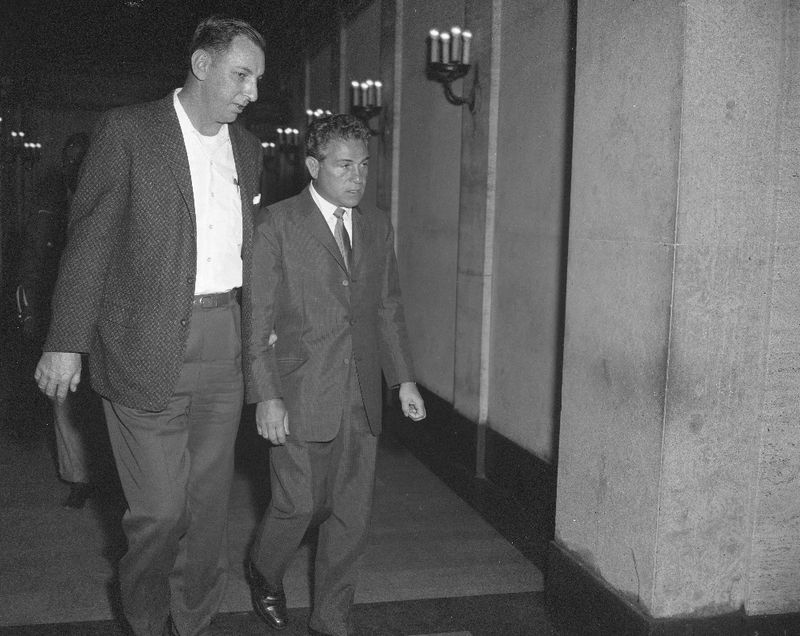 Chicago mobster Marshall (Johnny Shoes) Caifano, a protégé of revered Windy City Godfathers Paul (the Waiter) Ricca and Tony (the Big Tuna) Accardo, is best known as the Outfit’s west coast muscle from the 1940s until the 1970s. The diminutive and volatile Caifano was allegedly an accomplished killer – well-known for employing a shotgun and car bombs in his various lethal attacks. Although a prime suspect in numerous mafia-sanctioned rub-outs in his career in the underworld, Johnny Shoes died of natural causes in 2003, having never faced any murder charges in court.

Here’s a look at Caifano’s reputed highlights in the mob hit parade of the 20th Century:

Estelle Cary (1943) – The girlfriend of Outfit lieutenant Nick (Nicky Dean) Circella was set to cooperate with authorities in a federal extortion case that Circella was at the center of (the infamous Hollywood studio shakedown of the 1940s) and instead was discovered on the side of the road beaten, burned and ice-picked to death. Caifano and fellow Chicago Mafiosi Sam (Teetz) Battaglia and Lester (Killer Kane) Kruse were dubbed the top suspects in the Cary homicide. Cary was a longtime gangster moll in the area, dating back to the Al (Scarface) Capone era and had been linked romantically to several prominent Windy City wiseguys.

Frank Quattrochi (1946) – Chicago mob bookie that ran afoul with Outfit administration for skiming the till and was shot-gunned to death as he left a restaurant and walked to his car, a hat with the initials “M.C.” stitched in the bill found by police at the crime scene.

William Drury (1950) – Chicago Police Department organized crime division detective-turned-mob reporter who had testified in front of Congress about his knowledge of Outfit activities, Drury had made enemies of the powerful Fischetti brothers (Rocco and “Trigger-Happy Charlie”), cousins and confidants of Scarface Capone, and was shot-gunned to death as he was backing his car out of his garage.

Theodore (Tough Teddy) Roe (1952) – Southside Chicago black policy kingpin that fought fearlessly to prevent the Italian mob’s takeover of the illegal numbers lottery in the city’s African-American neighborhoods in the early 1950s, Tough Teddy killed Caifano’s brother “Fat Lenny,” the right-hand man to Midwest don Sam (Momo) Giancana, the leader of the Outfit’s takeover crusade, and was slain himself in a shot-gun drive-by which took place on Michigan Avenue. Giancana was caught on an FBI wiretap two decades later lamenting having to order Roe’s murder: “Nigger or no nigger, that bastard went out like a man, he had enormous balls, it was a shame to have to kill him.”

Louis (Russian Louie) Strauss (1953) – The west coast-based Jewish gangster was killed in California, strangled to death for trying to shakedown Las Vegas and Texas racketeer and casino owner Benny (the Cowboy) Binion. When he flipped and turned witness for the government, L.A. wiseguy Jimmy (the Weasel) Fratianno, a transplant from the Midwest admitted to killing Strauss with Frank Bompensiero, the future capo in charge of San Francisco, along with another individual at Jasper Mantranga’s house. FBI files reveal authorities suspected that Caifano, at that point deeply embedded in the west coast gangland scene, was that other individual.

Richard Cain (1973) – Notoriously corrupt Chicago Police Department officer and Outfit soldier was shot-gunned to death inside a sandwich shop on the city’s westside. Caifano was in the sandwich shop in the hours leading up to the slaying and engaged in a feud with Caifano in the months preceding the hit regarding a burglary ring both were involved in and Caifano believed Cain was trading intelligence to the detectives working an investigation into him for cash.

Ray Ryan (1977) – Millionaire businessman, oil tycoon, gambling junkie and Chicago mob associate, Ryan was blown up in a car bomb in the parking lot of his Evansville, Indiana health club. Ryan had testified against Caifano in an extortion case and had tried to bribe his way out of a murder contract upon Caifano’s release from prison.

Joe Testa (1981) – The Chicago mob “money man” and wealthy builder and land developer was blown up in a car bomb in the parking lot of his Florida country club after he butted heads with Caifano over a business deal gone bad in which Caifano concluded that Testa owed him 2 million dollars. Testa continually resisted attempts by Caifano to collect, according to FBI records, even seeking a sitdown with Tony Accardo to no avail