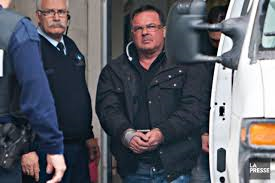 Translation; Do you speak French?

Well, if you don’t you might have a difficult time understanding the proceedings at the forthcoming murder trial of Canadian mafia bigwig Raynard Desjardins, the one-time right-hand man to deceased Montreal Godfather Vito Rizzuto.

Lawyers for Desjardins filed motions in Quebec Superior Court court last month requesting that Desjardins’ trial, set to begin in January, be conducted in French and be held separate from his seven co-defendants. Prosecutors desire a single trial before a bilingual jury. His seven co-defendants want the trial to be in English.

Desjardins, 60, and his alleged co-conspirators are charged with killing deported New York mob don Salvatore (Sal the Ironworker) Montagna in November 2011, with Desjardins acting as ringleader of the assassination plot that highlighted a bloody power struggle for control of the Montreal underworld.

Judge Michael Stober told the courtroom at a June progress hearing that he questions if a January 5, 2015 start-date for trial is realistic. Marc Labelle, Desjardins’ defense attorney, informed a visibly perturbed Stober that he is encountering scheduling conflicts for a January start to what is sure to be an arduous trial process. Canadian legal experts are expecting the trial to last at least six months, probably longer.

The case changed venues in April, from Joliette to Laval, both Montreal suburbs.

A just-recently ceased Canadian mob war pitted Desjardins and his initial-ally Montagna against an imprisoned Rizzuto. Released from incarceration in 2012, the revenge-driven, 67-year old Rizzuto died of cancer in December 2013, having lost his father, son and brother-in-law in the carnage-filled conflict that registered a body-count of 15 people in less than three years.

Rizzuto was locked up for eight years for his role in the famed 1981 “Three Captains Murders,” out of New York. He served his first two years in Canada, prior to his extradition to the United States. Upon Rizzuto leaving Canada, his robust criminal empire came under siege from his former protégé Desjardins, who teamed up with Joe Di Maulo, another top lieutenant of his, and Montagna, acting boss of the Bonnano Family, to try to push the jailed Montreal crime czar out of the rackets.

However, in the midst of the palace storming, Desjardins and Sal the Ironworker had a falling out, which according to Canadian prosecutors, resulted in Montagna (called ‘The Bambino Boss’ by the press for his young age – he was 40 when he was whacked) ordering a failed hit on Desjardins and Desjardins retaliating by engineering Montagna’s murder.

Desjardins survived an attempt on his life in September 2011, a sign that his pact with the power-obsessed Montagna had fallen apart. Responding quickly, Desjardins is alleged to have had Sal the Ironworker lured to the house of an associate of his named Jack Simpson two months later and killed. Montagna was attacked at Simpson’s house in Charlemagne, an east suburb of Montreal, but managed to flee, eventually murdered with two gunshots to the head following a chase that ended at a nearby riverbed.

For the year that Rizzuto was alive and back home after serving his prison sentence, he took aim at the renegade faction, headed by a then jailed-himself Desjardins, suspected in ordering at least a half-dozen slayings prior to succumbing to cancer.

Di Maulo was one of the first to be killed, less than a month following Rizzuto’s return, in January 2013. In July 2013, the renegade faction’s reputed No. 1 hit man, Salvatore (Young Gun Sam) Calautti, 40, and his henchmen Jimmy Turek, 35, were slain in Toronto, gunned down while smoking cigars in a car outside a bachelor party.

Cutting his teeth in the rugged Montreal drug game during the 1970s, Desjardins entered Rizzuto’s inner-circle when he became brother-in-laws with Di Maulo, who was a valued capo in the crime family led by Rizzuto and his father, Nicolo (Uncle Nick) Rizzuto, and a frequent social companion of theirs. Known as an expert underworld politician, connected to multiple gangland sects and able to effortlessly alternate between them, Desjardins was the Rizzuto’s longtime liaison to the motorcycle gang contingent, a key business partner with the organization in its narcotics distribution wing.

Vito Rizzuto and Desjardins were indicted together in 1987 on drug charges, however, both beat the case at trial. Finally nailed on a drug conspiracy in 1993, Desjardins was imprisoned for over a decade, returning to Montreal in 2004.

Before he died, Sal the Ironworker Montagna experienced a meteoric rise to American mob royalty. Born in Sicily, he moved to New York at 15 years old and by his early 20s was a driver and bodyguard for Bonanno soldier Baldo Amato, who sponsored him to get his button in the late 1990s. At the age of 30, he was named capo of the Bonanno’s Bronx-based crew – after serving an apprenticeship under Pasquale (Patty from the Bronx) DeFilipo – and four years later in 2006 he was bumped up to acting boss of the Family.

Montagna, the owner of a profitable steel company while a New Yorker, hence the moniker, was deported from the United States on an immigration violation related to his conviction for contempt after he refused to testify at a grand jury convened in 2003 to look into DeFilipo and his crew’s activities.