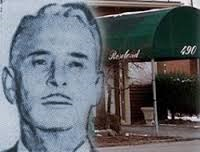 Residents of Western New York can breathe a little easier these days with the news that one of its most dangerous residents passed away in the spring.

In his heyday of the late Twentieth Century, the mere mention of Sicurella’s name left people in the Buffalo underworld shaking in their proverbial boots, as he became a go-to “fix-it man” for local mafia leaders. Sicurella was a suspect in at least a half-dozen gangland slayings at the time of his own passing (although he was never indicted in any of them).

According to FBI files and court documents, he “made his bones” in an infamous mob hit from the early 1970s. Informants tagged Sicurella the triggerman in the high-profile murder of Buffalo mafia capo John Cammilleri on May, 8 1974, shortly before he himself was formally inducted into the crime family and given a portion of Cammilleri’s rackets as reward for a job well done.

Overseeing the Buffalo mob’s interests in the labor unions for 30 years, Cammilleri was killed on his sixty-third birthday at a time in the city’s underworld where there was a great deal of unrest and jockeying for power, with Stefano (The Undertaker) Maggadino, the syndicate’s don and founding father, on his deathbed. An increasingly-unpopular Maggadino would die two months later amidst growing dissention in his ranks.

Loud, brash and colorful, Cammilleri, butted heads with the Family hierarchy, specifically, underboss Joe Fino, a one-time close ally, regarding affairs in Local 210 (LIUNA), of which Fino’s son was president. Called to a sit down in the late afternoon of May 8 at a Buffalo cigar shop to discuss the matter, Cammilleri got into a screaming match with syndicate brass, Sam Pieri, Salvatore (Sam the Farmer) Frangiamore and Joseph (Joe the Wolf) Di Carlo and left in a huff.

That evening, per FBI informants, Sicurella gunned down Cammilleri from a passing car, in front of Roseland’s restaurant, a popular hangout of his on the city’s Westside. Sicurella allegedly yelled, “Hey, Johnny, this one’s for you,” before unloading six shots into Cammilleri’s head, face, neck, back and chest, killing him instantly. Cammilleri had just attended the wake of fellow wiseguy Frank (Frankie Blaze) Lo Tempio and was going to meet his girlfriend and members of his crew at Roseland’s to celebrate his birthday.

Investigators tie Sicurella to the gun used in the Cammilleri hit via grand jury testimony by the man that reportedly sold it to him.

From that point forward with the famed “piece of work” under his belt, Jimmy Sicurella commanded immense respect on the streets of Western New York, not to mention significant attention from law enforcement.

Sicurella took federal pinches for running an arson-related insurance fraud scam in the 1980s, perjury in the 1990s and extortion and loan sharking in the 2000s. He was booted from his seat in Local 210 for his connections to organized crime as well.

His 1993 perjury conviction spawned from lying about incidents surrounding Cammilleri’s slaying in one of several grand juries convened to look into the headline-grabbing murder.

The extortion and loan-sharking conviction, stemming from Sicurella taking over a street-loan given out by his henchmen Frank (Poochie) Chimento after Chimento died in 1998, resulted in Sicurella’s last stint behind bars. Serving a seven and a half year stretch, he was released in December 2007.

“The man was pretty scary, he put the fear of God into people on the street around here for years,” said retired FBI agent John Culhane of Sicurella.