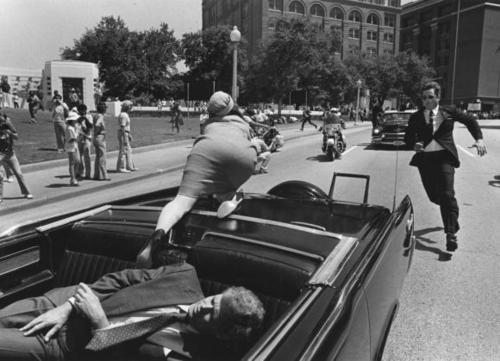 A new book, The Mafia Court – Corruption in Chicago, by Dr. John Russell Hughes, a physician and professor at the University of Illinois’ School of Medicine, alludes to a connection in the case between Licavoli, Leo Moceri and Chicago mob boss Sam (Momo) Giancana, one of the Mafiosi most-closely tied to the Kennedy assassination by conspiracy theorists.

Files is currently in an Illinois state prison serving a 50-year sentence for a 1991 conviction for attempting to murder a pair of Chicago police officers and claimed in a 1994 interview that he was the shooter on the grassy knoll. The FBI has deemed Files’ boasting regarding his involvement in the iconic political assassination lacking credibility.

Giancana, Nicoletti and Roselli were all murdered gangland-style themselves the following decade, each on the verge of testifying or already have testified in front of U.S. Congressional Committees.

Pete Licavoli died of heart failure in 1984, after a hallowed career in the underworld where he was a founding father of the Detroit mafia and went on to become a widely-respected figure on the national gangland landscape, with pull on both sides of the Atlantic Ocean.

Licavoli and the Moceris were cousins. During Prohibition, Horseface Pete and Joe Misery were the co-leaders of “The River Gang,” a preeminent bootlegging syndicate in Detroit, and Leo Lips, Joe Misery’s baby brother and Thomas (Yonnie) Licavoli, Horseface Pete’s little brother, were two of the gang’s top enforcers.

Yonnie Licavoli was jailed for over 30 years on a murder conviction from 1934 in Toledo, Ohio, a region traditionally controlled by the Detroit mob and at the time of his conviction, Yonnie’s home base.

At the conclusion of Prohibition, Pete Licavoli and Joe Moceri merged business affairs with East Side Gang leaders, William (Black Bill) Tocco and Joseph (Joe Uno) Zerilli, and formed the modern-day Detroit mafia. The blending of the two factions, on the heels of the Eastsiders winning the Crosstown Mob War over the West Side Gang and its’ boss, Chester (Big Chet) LA Mare, resulted in the syndicate earning the monikers, “The Combination” and “The Partnership,” referencing the Licavoli-Moceri group and the Tocco-Zerilli group coming under the same banner.

Horseface Pete and Joe Misery became high-level capos in the Detroit Mob for the next four decades. Leo Lips’ wound up moving across the state border and rising through the ranks of the Ohio mafia, first in Toledo, then in Youngstown and Akron and finally in Cleveland.

In 1940s, Licavoli began spending winters in Arizona, planting a flag in Phoenix and Tucson and building himself an opulent estate, Grace Ranch, named after his wife. He eventually moved out there on a permanent basis, averting more than a half-dozen murder raps while living in Michigan.

His youngest brother, Dominic, also a “button man” in the Detroit mafia, was married to Joe Zerilli’s daughter. Zerilli died peacefully, never having spent a night in jail, in the fall of 1977.

For most of the 1970s, Licavoli was the Detroit mob’s underboss, helping ease the transition of power from the Family’s founders to a new generation, spearheaded by a series of sons and nephews of syndicate brass.

Joe Moceri was killed inside a warehouse he owned in 1968, the victim of what is believed by authorities a random robbery gone wrong, beaten to death with a pipe.

An FBI memo from December 18, 1968 states that informant told his handlers in the Bureau that Moceri was murdered on orders of Pete Licavoli, possibly for having sensitive information regarding the Kennedy assassination. That same memo references a prior federal informant log which alleged Licavoli sent Joe and Leo Moceri to Dallas on November 22, 1963 to help kill Kennedy.

“The notion that Pete Licavoli would order Joe Misery’s murder is ridiculous,” said one current member of Detroit underworld who knew both Licavoli and Moceri. “Pete loved Joe like a brother, trusted him like blood. Even if the Kennedy thing is true, nobody would have to worry about Joe Misery getting loose lips. Misery was killed by some bozo who didn’t know who he was robbing. The guy gave him a couple whacks and Joe was old at the time and it did him in. It was a fluke, it wasn’t a hit.”

Leo Moceri, like his older brother before him, met a grisly demise. He was slain in the Cleveland mob war that rocked Ohio in the late-1970s, dying in August 1976 as the Family’s underboss and a suspect in more than 10 gangland at the time of his death.

Arrested or indicted in seven homicides throughout his days on the streets, Horseface Pete took his last pinch in 1976 for buying a stolen 16th Century painting from an undercover FBI agent, forced to do a year and half in prison as punishment.