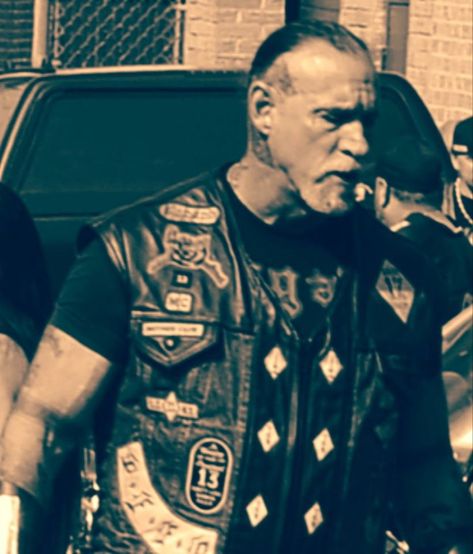 March 9, 2021 – The Blue Wave is westward bound and shows no sign of slowing down. Sources speaking to Gangster Report and NJ.Com, say Pagan’s Motorcycle Club boss Keith (Conan the Barbarian) Richter recently opened Pagan’s chapters in Texas, Nevada and Puerto Rico and is actively forging alliances with Hispanic crime groups and other biker empires to bolster his conquest agenda.

Consider it the beginning of “Phase 2” of the so-called Blue Wave mandate.

Two sources in New York law enforcement, claim Richter intends on targeting Arizona, Oklahoma and Colorado next in his expansion campaign dubbed the Blue Wave Initiative. This is in addition to the club doubling its roster size in the four years of Richter’s time at the helm in what could be called “Phase 1” of the Blue Wave, where the chiseled 62-year old hippy-haired biker god ordered an aggressive east coast expansion and earned supreme loyalty from the men he led.

Richter was arrested last month on his way home to Long Island from a Pagan’s party in suburban Philadelphia, on a gun-possession charge. He is behind bars on a parole violation stemming from the case. The party, which took place on the night of February 20, is an annual event at the Lancaster, Pennsylvania Pagan’s chapter clubhouse in honor of deceased chapter member Robert (The Mailman) Rutherford, who was killed in the notorious Hellraiser’s Ball Brawl in Long Island in February 2002.

Somebody at the party tipped the feds off to the fact that Richter had a gun in a secret compartment of his white-colored GMC SUV and was headed back to New York. Local police in Mercer County made the traffic stop and arrest. The state of Pennsylvania has long been an influence-center in the Pagan’s organization, dating back decades.

Richter is based out of Long Island and was the Long Island Pagan’s chapter boss and the club’s national Sergeant At Arms in the 1990s before being sent to prison for extorting and trying to kill a New York strip club owner. He was released in 2012 and took power as the Pagan’s national president by force in 2017, per ATF documents.

Since assuming the reins, Richter has colonized rival territory in parts of Northeast Pennsylvania, Northern New Jersey, Rhode Island and Connecticut, planting flags for the Pagan’s while absorbing smaller clubs and support clubs and “patching” over hundreds of new members. Richter wants the Pagan’s to establish a strangle hold on the entire Northeastern seaboard, per fede

On Richter’s orders, members of The Pagan’s in clubs east of the Mississippi River must wear an “East Coast” rocker rather than one that identifies any particular city or state as is customary in most other clubs. There have been nine new Pagan’s chapters opened on the east coast under the Blue Wave mandate issued by Richter. The two out west and the one in Puerto Rico makes a dozen all together, not even counting the support club affiliates established around the country.

Richter has what some call a “cult of personality” appeal throughout the Pagan’s ranks and is as beloved and feared like no other figure in the American biker world since the famed Harry (Taco) Bowman days of The Outlaws out of Detroit and Chicago in the 1990s. According to those familiar with Richter’s plan, the Blue Wave is aimed at going directly after the Hells Angels, the biggest biker brand on the west coast.

The 2002 Hellraisers Ball was a gala being thrown at a banquet hall by the Hells Angels in New York that was attacked by several vans full of Pagan’s, including “Mailman” Rutherford. Richter was in prison at the time of the brawl which saw 73 Pagan’s face various rioting and assault cases.

In prison, Richter cultivated relationships with Latino gangbangers and leaders of The Mongols Motorcycle Club, per sources, and is leveraging those ties on the street today with his Blue Wave push. For the first time in club history, Richter is allowing non-white members to join, specifically inviting large groups of Hispanics into the fold, resulting in backing by the Latin Kings. The Mongols, mainly a west coast club, are now moving east, with Richter’s blessing, sources says, opening up it’s first New Jersey chapter late last year.

Law enforcement points to Richter’s tapping of Hugo (Zorro) Nieves of New Jersey as his national vice president as a key to growing the club’s numbers and galvanizing such strong support from the rank and file. Nieves is well-spoken, intelligent and capable and has brilliantly acted as Richter’s mouthpiece to the public. Richter has also leaned on Nieves to politic with the Latin Kings on his behalf, per sources.

*Credit in this story also goes to Alex Napoliello (The Star-Ledger/NJ.Com) and Dave Schratwieser (Mobtalksitdown News & Fox News 29 in Philly)