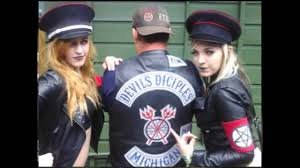 Fat Dog and his crew of misfit biker brass have some fat sentences coming their way. The leadership of the Devils Diciples motorcycle gang, including international president Jeff (Fat Dog) Smith and his vice president Paul (Pauli D) Darrah, were convicted in a titanic federal racketeering, drug, attempted murder, extortion and gambling case in a Detroit federal court Friday afternoon.

After a trial that lasted a painstaking 18 weeks, the jury delivered guilty verdicts against six of the seven defendants that made it to trial in an indictment three years ago that ensnared 40 Devils Diciples (intentionally misspelled) in multiple states. Smith, Darrah and a number of their convicted counterparts are facing possible life in prison. They’ll be sentenced this summer.

The jury deliberated for a month before coming back with a verdict late Thursday. There have been almost two dozen guilty pleas in the case that spawned from a federal investigation that dated back a decade and targeted activity in the Devils Diciples organization going back two decades.

Although the Devils Diciples aren’t considered one of the top-tier national outlaw biker syndicates  they are a heavily-respected bunch of feared and capable kooks and their head honcho, Fat Dog Smith, was a nationally-recognized biker-gang power during his reign on the street that lasted over 20 years. Court records cite Smith assuming the presidency in 1993.

Established in California in the 1960s, today the Devils Diciples international headquarters is in Michigan, a hub for outlaw biker culture in the Midwest. The 60-year old Smith lives in Mount Clemens and the 50-year old Darrah resides in nearby Chesterfield Township, both suburbs of Detroit.

The Devils Diciples have chapters in Michigan, California, Ohio, Illinois, Indiana, Alabama and Ontario, Canada. Under Smith’s and Darrah’s leadership, the gang ran a set of large interstate crystal meth, pill and marijuana rings, gambling houses, shakedown scams and instilled a general sense of terror and fright in anyone who tried to get in their way.

In 2007, Fat Dog shot a gang member underling in the leg while Darrah held him still. The very next year, Smith delved out a vicious public beating to a Detroit member’s girlfriend that had placed gang colors on the floor, as Darrah stood watch at the door of a Macomb County, Michigan clubhouse.

Smith shot and almost killed a rival in 1997, however, a generous plea deal in state court which resulted in an investigation into connections by Smith and Darrah into the state legal system, landed him a short stint in the can and he was back out at the helm of the gang by the start of the New Millennium. According to federal informants, Smith bragged openly about having a local judge in his pocket and his access to sensitive government documents.

Darrah was a menacing figure in biker gang cirles throughout Michigan. Promoted to vice-president in 2004, he became Smith’s personal muscle.