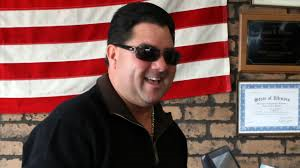 Reputed Chicago mafia lieutenant Paul Carparelli will be spending the rest of the time leading up to his fast-approaching trial on federal extortion charges behind bars. Carparelli, a wiseguy with a tough-guy reputation on the streets affiliated with the Outfit’s Cicero crew, has had his bond rescinded following employing an intimidation tactic to dissuade a witness from testifying against him at his upcoming trial set to begin this summer.

Early last week, Carparelli, charged with dispatching enforcers to deliver beatings to debtors, spotted an associate of the witness and tracked him down in the parking lot of a suburban Wal-Mart, telling him that the witness was a “rat” and to “tell him he knows what happens to rats.” The witness’ associate (an employee of his) immediately contacted the police and Carparelli was hauled in front of a judge and locked up last Friday afternoon.

In 2013, Carparelli and six co-defendants were indicted for extorting businesses in multiple states around the country. Five of his co-defendants have either pled guilty or have been convicted in the case.

The 46-year old Carparelli (pictured in the featured image of this story) is connected to Chicago mob boss Salvatore (Solly D) DeLaurentis and boasted on FBI wiretaps of taking 10 thousand dollars from him to break a debtor’s legs. He’s said to be part of the Cicero’s regime Lake County sub-crew, smack dab in the heart of DeLaurentis’ powerbase.

Regarding being a mobster, Carparelli makes no apologies.

“I’ve been with the Outfit my whole life, I’m not about to change now,” he was caught on an FBI  wiretap telling a friend. “This is what I’m made of and this is where I come from and I’m fucking proud of it.”

DeLaurentis has been “acting boss” of the Outfit since 2013, grabbing the reins from imprisoned Michael (Fat Mike) Sarno (sent away in Dec 2010 on racketeering charges). Carparelli’s direct superior in the mafia these days is DeLaurentis’ best friend, Louis (Louie Tomatoes) Marino, recently sprung from more than two decades in prison and awarded the mob territory in Lake and McHenry Counties by Solly D as a “welcome home present.”

Cooking up something new

Aging New England underworld figure and one-time Philadelphia Mafioso Robert (Bobby the Cook) Gentile, suspected by the FBI for having access to the pilfers of the infamous and still-unsolved Isabella Stewart Gardner Museum robbery from over two dozen years ago, was sent back to prison this week for violating his parole by selling a firearm.

Gentile, 79, was released in 2014 after serving two and a half years in the clink for gun possession and an illegal drug transaction. The Connecticut resident told an undercover FBI agent posing as a drug dealer that he would sell two pieces of artwork from the Gardner Museum score (the biggest art theft in history) for $500,000 apiece.

Back in the late 1990s, Gentile was one of a small group of New England-based mobsters that were inducted into the Philadelphia mafia by Pennsylvania Godfather Joseph (Skinny Joey) Merlino and allowed to set up a crew under the Philly LCN banner in the Boston area. Not only did Gentile inform the wired-for-sound fed in 2012 that he was still active in the mafia, but he also told him that he was in contact with Merlino, at that time in Florida and currently in the final two weeks of a four-month stay as a guest of the government for a parole violation of his own.

The Merlino organization is believed to have tried to move the scorching-hot artwork on the black market, physically taking possession of several pieces at one point a near-decade following the robbery itself, according to court records.

The FBI has pegged Gentile as one of three living “persons of interest” in the Garnder Museum investigation. He’s been questioned extensively in the past about his knowledge of the crime and flunked a government-administered polygraph.

The Gardner Museum, a small, elite, privately-funded showcase of rare artwork located in the Fenway District in downtown Boston, was robbed on March 18, 1990 by a pair of assailants dressed in policemen uniforms who got away with 13 pieces of precious art and a half-billion dollar score.

When the FBI raided Gentile’s home in 2012 agents discovered a handwritten list of the stolen paintings and drawings, which included three original Rembrandts, and their accompanying black-market values. Authorities don’t think Gentile was one of the men that pulled the robbery itself, but rather assumed possession of some of the looted goods in the years after. The wife of a fellow deceased mobster told the FBI that in the months leading up to her husband’s passing as a result of cancer in 2004 he had given over a portion of the stolen paintings to Gentile.