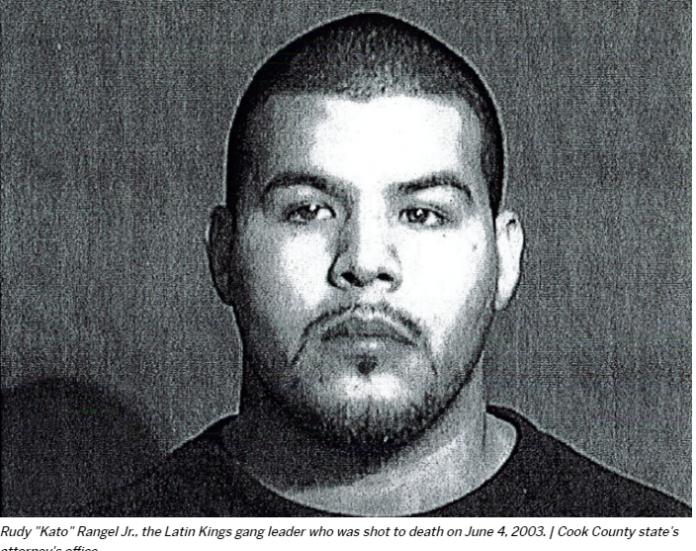 November 13, 2021 – The book is finally closed on the 2003 gangland assassination of Chicago Latin Kings boss Rudy (King Kato) Rangel. This past week, Four Corner Hustlers shot caller Labar (Bro Man) Spann was found guilty of ordering the hit, as well as three others, in federal court out of Illinois. Spann had previously beaten the case at a state trial back in the 2000s where Vice Lord gang members, Donnell (Squeaky) Simmons, Martise (The Grim Reaper) Nunnery and Marcus (Lil’ Black) Ware, were each convicted.

Simmons admitted to being the triggerman in King Kato’s highly-publicized slaying on the evening of June 4, 2003 when the 31-year old Rangel was shot to death as he sat in a barber chair getting a haircut and watching the opening game of the 2003 NBA Finals between the San Antonio Spurs and the New Jersey Nets. The hit took place at Nationwide Cutz barber shop on the Westside of Chicago located in a converted trailer near the corner of Roosevelt and Sacramento Avenues.

King Kato was the most infamous Hispanic crime lord in Windy City history, beloved by his men and given bi-coastal props, especially in the rap world where he maintained friendships with DMX and Fat Joe in New York and B-Real and the Cypress Hill crew out in California. DMX penned the song “A Yo Kato,” in Rangel’s honor following his killing. Around the time of his death, Fat Joe was in negotiations to give King Kato his own Terror Squad Midwest label to manage.

Federal prosecutors believe Spann hired Simmons on a Sinaloa Cartel-issued contract from Mexico. The cartel believed Rangel had stolen 150 kilos of cocaine earmarked for Bro Man and his Four Corner Hustlers, like the Latin Kings, based on Chicago’s Westside. Rangel was of Puerto Rican

Early on in the investigation, it appeared Spann was trying to rob Rangel, a street rival of his, of a fancy Franck Muller designer watch worth more than $100,000. But later on, Squeaky Simmons told the FBI that Spann gave him the contract on the notion that the “lick” he was doing was related to a 150 kilo drug shipment that turned up empty and upset the Sinaloa bosses.

Martise Nunnery middled between Spann and Simmons. Spann promised Simmons $30,000 payment for the hit. Lil’ Black Ware had a friend working at the barber shop King Kato went to every week for a haircut and got the nod when he was in there on the evening of June 4, 2003. Ware passed the information on to Nunnery, who had a pair of Grim Reaper tattoos adorning his body.

Simmons told authorities that Spann gave him the gun used to murder King Kato and was in the car, a red-colored Ford Taurus, that drove him to the barber shop that night, ushering the executioner to his kill party. He testified at Spann’s two-month federal trial.

“Don’t miss, shorty. Come back when you’re done, we’ll be waiting for you,” said Simmons of his conversation with Bro Man

King Kato grew up on the city’s Southwest Side of Chicago. As a youngster, Rangel was friends with the Flores brothers (Pedro aka “Little Pete” & Margarito aka “Junior”). Hailing from the Little Village neighborhood, the Flores brothers rose to become the top American lieutenants of Narcos czar Joaquin (El Chapo) Guzman himself.

Rangel benefited from this relationship in his own rise up the ranks in the Latin Kings. After King Kato’s murder, his wife Valerie, began a romance with Junior Flores and disappeared with him and his brother into the Witness Protection Program. The Flores boys decided to cooperate with the DEA in the late 2000s and helped federal prosecutors convict the world’s most rich and powerful drug boss, El Chapo Guzman, at his globally-chronicled 2019 trial.