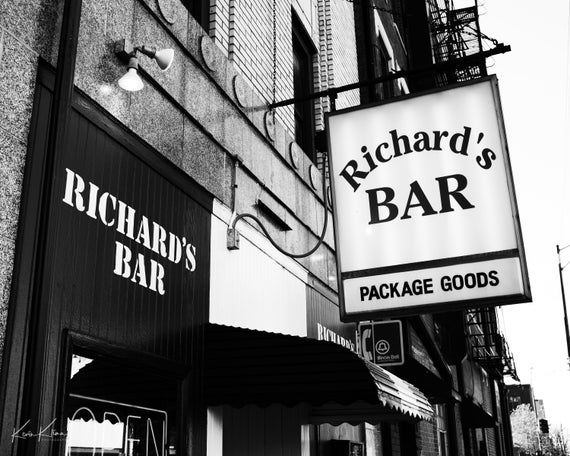 March 22, 2020 — Chicago mob hot spot, Richard’s Bar, was investigated by police for operating an open bar after the city ordered all bars and restaurants closed to the public amid the Corona Virus (COVID 19) virus outbreak. Illinois Governor J.B. Pritzker issued a “shelter in place” order for the entire state Saturday.

Residents of the River West neighborhood where Richard’s Bar, has been a staple for years, as well as Westside hub for the Outfit’s Grand Avenue mob crew, reported activity at the tavern to police back on Tuesday night. Neighbors told police dispatchers that at least 9 different people were sitting and drinking inside Richard’s Bar at the three-way intersection of Grand Avenue, Milwaukee Avenue and Halsted Road. <

The establishment has long been known to violate the state’s smoking ban. Before the shelter in place order went into effect this weekend, bars in the city were allowed to sell unopened alcohol to-go.

Reputed Chicago mafia street boss Albert (Albie the Falcon) Vena uses Richard’s Bar as his headquarters. Vena, 71, took over Grand Ave. capo duties in around 2008 and street boss affairs for the entire Outfit at some point around 2012, per sources. Richard’s Bar and its next door neighbor, Italian eatery La Scrola, once served as home base for legendary Outfit figure, Joey (The Clown) Lombardo, a Grand Ave. crew chief predecessor of Vena’s and the organization’s consigliere for most of the 1990s and first half of the 2000s.

Last month, Richard’s Bar was the location of a murder when a dispute inside the bar spilled outside onto the street and resulted in military vet Thomas Tansey stabbing Kenny Paterimos to death with a box cutter. The 30-year old Tansey was indicted for second-degree homicide on March 3. He was originally arrested at the scene and explained to responding police he was acting in self defense. Minutes prior to the stabbing, Tansey had been tossed off the premises for shouting a homophobic slur in Paterimos direction as they argued.