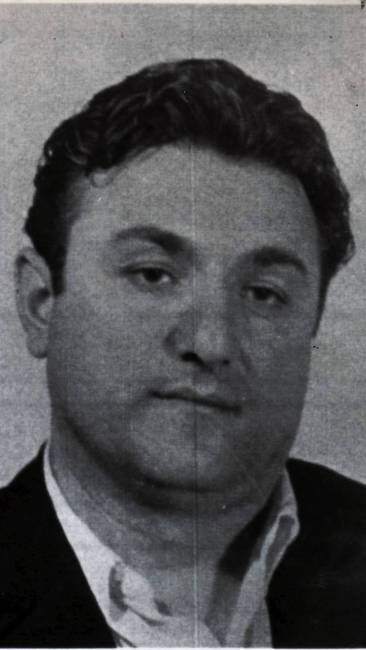 Newly-released law enforcement documents and court records related to treacherous slain New England mafia underboss William (Billy the Wild Man) Grasso reveal details behind the final two mob hits Grasso, the most feared mobster in the history of Connecticut, took part in before he himself was murdered gangland-style in the coming months.

One was business, the other was personal.

The first took place in May 1988 when high-level Patriarca Family associate and Grasso’s top gambling lieutenant, William (Hot Dog) Grant, disappeared. Grant’s hit was called in from New York and related to a belief that the flashy 56-year old wiseguy was feeding information to the FBI. The contract was given to Grasso by the Colombo Family.

The second came a half-year later on December 28, 1988 when the bullet-riddled body of local mob associate, reputed drug dealer and pro boxer Eric Miller (pictured above in mug shot) was found slumped behind the wheel of his sports utility vehicle on a Hartford street corner. Miller’s murder resulted from the young, fiery Irish street-tough and trained fighter knocking Grasso unconscious with a punch to the jaw after a heated verbal altercation erupted between the two outside a popular Hartford eatery over Labor Day weekend.

Grasso, 62, was killed on June 13, 1989, shot in the head as he drove in a van with fellow gangsters on a suburban Hartford expressway and thrown into the Connecticut River, the first casualty of a mob war that engulfed the Patriarca syndicate on and off for the next half-dozen years.

Running a multi-million dollar a year sports-betting operation headquartered out of his East Hartford restaurant, Augie and Ray’s, Hot Dog Grant was closely aligned with a number of New York Mafiosi from the Five Families, many of whom frequented his establishment, famous in the 1970s and 80s for late-night gambling parties. Grant was responsible for hiding Colombo Family underboss Alphonse (Allie Boy) Persico, who in 1980 fled his Brooklyn powerbase after being indicted on federal racketeering charges, setting up a series of safe houses across New England for Persico to stay at while he was on the lamb.

Rumors began circulating in the East Coast underworld in the mid-1980s that Grant was a police informant, allegations both him and Grasso were called to a sit-down with New York mob powers in the Genovese, Colombo and Gambino Families to address in the summer of 1986, according to the newly-released records. Following Persico’s apprehension on November 11, 1987 in a West Hartford apartment, the Colombos – a mob brigade headed by Allie Boy’s brother, Carmine (The Snake) Persico – were convinced, according to the FBI and Hartford Police Department files, that Grant not only tipped off the U.S. Marshal’s office as to Allie Boy’s whereabouts but also stole a large sum of money he had in safekeeping and was using to live on when he was on the run from the law.

Grant vanished on Saturday, May 23, 1988 en route to his son’s high school graduation party. His body has never been found. Informants told the FBI that Grasso carried out the job and commented to people in the wake of Grant’s disappearance that if he had known about the party, he would have waited until the next week to off him instead.

After Grant disappeared, according to police files, Grasso’s No. 2 in charge John (Sonny) Castagna raided his rackets and took over his sportsbook. An FBI wiretap caught Castagna making phone calls in search of a stash of uncut diamonds Grant owned.

Castagna died of natural causes at 72 years old in the Witness Protection Program last year. He became a turncoat in 1990 when he was part of a massive federal RICO indictment levied against virtually the entire administration of the Patriarca clan. Entering the Witness Protection Program alongside him was his son and fellow wiseguy, Jackie Johns.

Miller was the some-time driver and bodyguard for Johns, often acting as a collector for him and his dad as well as dabbling in joint drug deals together. The three of them would congregate at either, Miller’s gym, the Hartford Boxing Club, or Grasso’s headquarters, Franco’s, a ritzy bistro on Franklin Street in the heart of the city’s South End neighborhood where mobsters, attorneys and politicians alike dined on fine Italian cuisine and high-powered figures from each line of work would hold court nightly at the restaurant’s trendy bar.

On the afternoon of September 3, 1988, Miller drove up to Franco’s to meet Castagna and Johns for lunch. Parking his Chevy Blazer in front of the restaurant, when he got out of the truck and approached the entrance he came upon Johns laying sod in a mini garden off the sidewalk. The pair of friends began some good-natured needling, throwing barbs back-and-forth as they met to embrace – the boxer asking the wiseguy what a big, bad gangster was doing yard work for and if he was available for hire later on that day.

The Wild Man became irate at what he saw as Miller’s disrespect and began screaming at Miller to leave. Miller began screaming back and the altercation started to attract a crowd, including Castagna, who had been inside the restaurant. Picking up a gardening knife and brandishing a shovel, Grasso stormed towards Miller and demanded that Miller exit the premises and never return or he would remove both of his eyes with his blade. Miller hollered an obscenity at Grasso and the two got nose-to-nose at which point Castagna and Johns stepped in to separate them and Miller clocked Grasso with a haymaker that sent him flying backward onto the pavement out cold. There were some witnesses to the incident that told authorities Miller acted in self-defense and his punch was in response to Billy the Wild Man lunging at him with his knife.

The recently-unveiled police records reflect Grasso’s subsequent obsession with killing Miller for the gangland Cardinal Rule infraction of raising a hand to a “made guy,” personally stalking him in the months and weeks leading up to his murder and ordering the robbing of his apartment.

The apartment Miller shared with his girlfriend was ransacked, a safe with cash, drugs and valuables, allegedly lifted and delivered to Grasso on December 22, five days before Miller was killed.

Per FBI documents, Jackie Johns called Miller on the evening of December 27 and told him he could recoup some of what was stolen if he came and met him that night. Telling his girlfriend that he was going to meet Johns, the 30-year old Miller left his apartment and never came back. His body was discovered in his Blazer the next morning on an empty street corner, shot multiple times in the head, neck and chest.

During his testimony as a cooperator in 1991, Johns admitted speaking to Miller on the day he died, claiming he spoke to him every day, and that Grasso asked him for help in locating Miller, inquiring about Miller’s habits and social hangouts in the fall and into the early winter of 1988. Today, he still steadfastly denies any participation in or surrounding Miller’s slaying.

Grasso began his mob career in New York as an associate of the Colombo Family and rose through the ranks of the New England Mafia after becoming cellmates with the syndicate’s namesake Raymond Patriarca, Sr. while serving a prison sentence in the 1970s. Upon his release, the  ruthless and ill-tempered Grasso became the Patriarcas’ overseer of mob activity in Connecticut and parts of Rhode Island.

When Partriarca, Sr. died in 1984 and his son, Raymond (Junior) Patriarca, Jr., was tapped as his successor, Grasso became his underboss and some believe the real power behind the throne for the next five years until his own grisly demise – he was done away with by members of a faction in the Family led by Boston capo Joseph (J.R.) Russo and his young protégé Vincent (Vinnie the Animal) Ferrara who were trying to take control of the New England mob for themselves by force.

The hit team of Patriarca soldiers that clipped Grasso consisting of triggerman Gaetano Milano, brothers Frank (Frankie Pug) Pugliano, Louis (Louie Pug) Pugliano and Frank (Frankie C) Colatoni were all convicted of the crime and have all since been released from their respective prison sentences.