Let’s get ready to rumble…..LALA Land-style. Two major movie studios are set to slug it out over a Motor City icon.

Universal Pictures has a tug-of-war on its hands with Studio 8’s purchase of a White Boy Rick movie script this week. In other words, first one to the finish line wins.

Back in October, Universal gobbled up the rights to a 45-page EBook by New Yorker Evan Hughes entitled ‘The Trials of White Boy Rick’ and went into development on a movie about long-incarcerated 1980s Detroit teenage drug dealer and underage government mole Richard (White Boy Rick) Wershe, naming a director in Joseph Kosinski (Oblivion) and a producer in Scott Stuber (Ted).

On Tuesday, Studio 8, overseen by Hollywood juggernaut Jeff Robinov, threw its hat into the ring to challenge Universal in a race to get Wershe’s story to the big screen. Robinov’s freshly-minted Studio 8 bought a script penned by the writing team of Noah and Logan Miller (Touching Home, Sweetwater) – protégés of multiple-time Oscar-nominee Ed Harris – and have brought on John Lesher (Birdman) to produce a cinematic adaption of Wershe’s life called simply “White Boy Rick.”

Married to model and actress Molly Simms, the 46-year old Stuber runs Bluegrass Films under the Universal banner. The Bluegrass-engineered White Boy Rick movie doesn’t have a script yet and reportedly will announce a screenwriter soon.

Studio 8 is backed by Sony Pictures and a Chinese investment conglomerate and resides on the Sony lot. Headed by former Warner Bros. president and industry mega agent Robinov, Studio 8 was created in late 2014 and expects to produce a half-dozen films a year.

Wershe, 46, is still in prison after 27 years on a single cocaine-possession charge stemming from a routine police traffic stop in May 1987 when he was just 17 years old. During the late-1980s, the Motor City became fascinated with the kid known on the streets and the press as White Boy Rick, famous for his swagger, mink-coat ensembles and meteoric rise through the notoriously treacherous and almost exclusively-black inner-city Detroit drug world, not to mention his high-profile romance with the Mayor’s niece, a woman almost a decade older than him and the wife of his gangland mentor, eastside kingpin Johnny Curry.

In recent years, it’s been revealed that Wershe was recruited into the drug game by a federal narcotics task force as a fresh-faced, eager and ambitious 14-year old right out of eighth grade, encouraged to drop out of school and work full time feeding them information and then was almost shot to death as a result. The unholy alliance between the suddenly-ascending and federally-funded White Boy Rick and the U.S. government lasted more than 2 years and concluded when he was 16. 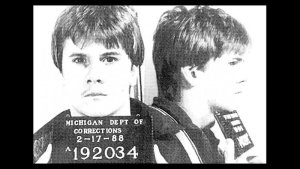 Less than a year later, he was busted with 8 kilos of cocaine and sent to jail for the rest of his life without the possibility of parole. After the 650 lifer law was overturned in 1998, Wershe became eligible for parole but he has been rejected all three times he’s been considered.

Kid Rock spoke at Wershe’s 2003 parole hearing in favor of his release. Eminem once circled a movie project himself on the heels of 8 Mile.

The Miller brothers were born and raised in northern California. Ed Harris (Apollo 13, History of Violence, the Truman Show) has starred in both their first two movies, projects they also directed. The Millers aren’t expected to direct Studio 8’s White Boy Rick project.

Besides their screenwriting, the Millers have written two books: You’re Either In or You’re In The Way (Harper Collins) and the forthcoming Let The Good Prevail (expected to be adapted into a movie as well).