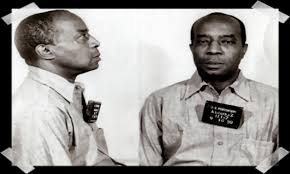 1 Ellsworth (Bumpy) Johnson – Unquestionably the most notorious black mob associate of all-time, Johnson ran the rackets in Harlem for the Genovese crime family for a good chunk of the 20th Century. Making his name in the 1930s “New York Numbers War,” which saw several different street factions vying for control of the city’s African-American policy lottery trade in the days after Prohibition concluded, Johnson was feared, respected and beloved by the community, becoming the first genuine black gangster celebrity. Owner of an arrest record that featured over 40 collars, he served a number of stints behind bars, his final one on a drug charge at Alcatraz in the 1960s. Johnson (pictured above) died of a heart attack in 1968 at 62 years old under indictment in a federal narcotics conspiracy case. Actor Laurence Fishburne portrayed Johnson in the 1997 film Hoodlum.

2 Henry (Mickey the Cobra) Cogwell – Founder of the Cobras street gang on the westside of Chicago in the 1950s, Cogwell rose to be the Windy City black underworld’s liaison to the Italian mafia, known locally in the Chicagoland area as “The Outfit.” The Cobras (soon to be known as the Mickey Cobras) were aligned with the P-Stone Nation, another westside African-American crime syndicate that sprouted up in the 1960s under the leadership of the fearsome Jeff Fort. Cogwell was killed gangland style in 1977, possibly after falling out with Fort, at least partially, for Fort’s belief that Cogwell was getting too close to his mafia counterparts.

3 Jeff Riddle – The self-declared “Black John Gotti of the Ohio underworld”, Riddle became a trusted lieutenant of Youngstown mafia leader Lenny Strollo in the late 1980s and 1990s. Strollo was the Pittsburgh mob’s crew chief in Ohio and Riddle openly told people that despite his African-American heritage, he was on his way to being “made” into La Cosa Nostra (the American mafia). Riddle ran gambling and shakedown rackets on behalf of Strollo and helped him carry out murder contracts. In 1996, Riddle helped plan the assassination of Strollo’s mob rival, Ernest (Big Ernie) Biondillo and the botched assassination of Youngstown prosecutor Paul Gains. He was convicted of racketeering and murder at trial in 1999 and died of cancer in prison in 2012.

4 Francis (Big Frank Nitti) Usher – Mentored in the treacherous Motor City underworld by the legendary Giacalone brothers (Anthony “Tony Jack” Giacalone and Vito “Billy Jack” Giacalone), Usher went on to become the biggest African-American drug kingpin in the state of Michigan during the mid-to-late 1970s. Ruling the streets with his Murder Row gang, Usher was nicknamed by longtime Detroit mob street boss Tony Giacalone in honor of the former Chicago mob boss Frank (The Enforcer) Nitti. He was convicted of a triple beheading in 1980 and sentenced to life in prison until the charges were overturned on appeal and he was acquitted at a new trial in 1989. Today, Usher is living in Indiana and reported to be retired from his criminal dealings.

5 Parnell (Stacks) Edwards – An associate of the Lucchese crime family out of New York, Edwards was a struggling musician, wannabe wiseguy and thief in James (Jimmy the Gent) Burke’s “Robert’s Lounge Crew.” Burke oversaw a group of criminals under the umbrella of Lucchese capo Paul Vario’s stable of rackets. Edwards became close with one of Burke’s protégés, Thomas (Two-Gun Tommy) DeSimone, and the pair were famous for running credit card scams throughout the New York and New Jersey area in the 1970s. They were both part of Burke’s infamous Lufthansa Heist (stealing 5 million dollars from the Lufthansa Airlines terminal at JFK Airport in 1978) and each wound up dead in the immediate aftermath of the high-profile boost. Actor Samuel L. Jackson portrayed Edwards in the 1990 movie Goodfellas. Academy Award-winners Robert De Niro and Joe Pesci played characters based on Burke and DeSimone, respectively, with Pesci snagging the Oscar for Best Supporting Actor with his ferocious performance as the hot-headed “Tommy D.”