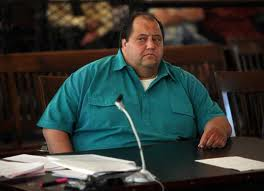 The band is getting back together in the Boston mafia. In the North End that is. Where else? With the release from prison of New England mob underboss Carmen (The Big Cheese) DiNunzio two weeks ago, his entire inner-circle has returned to the streets of Beantown, with the exception of his little brother Anthony (The Little Cheese) DiNunzio, the crime family’s former acting boss who has three years left on his own prison term.

According to law enforcement sources in Massachusetts, the Big Cheese is expected to rejoin his crew of direct underlings in Gregory (Fat Greg) Costa, William (Billy the Angel) Angelesco, Salvatore (Tea Party Tore) Marino and Johnny Scarpelli and reconvene his rule over the Boston faction of the New England LCN syndicate also known as the Patriarca Family.

“We’re watching that little cluster pretty close now that Carmen is out and about again,” one police source said. “I doubt any of them have transformed into Boy Scout leaders since they’re time away. Some of those guys have been back in town for a little and laying the groundwork for Carmen to come back. So this is something that has been in the works for a while, how they would transition with the Big Cheese so to speak back on the scene.”

DiNunzio, 57, was indicted on racketeering and bribery counts in the 2000s and served five and a half years in prison (he pled guilty to bribing an FBI agent posing as a Massachusetts State Highway Department Inspector in exchange for the dropping of gambling and extortion charges).

The rotund and gregarious DiNunzio was upped to his underboss slot in 2003. He was “made” into the Patriarca clan in 1997 by then-syndicate Godfather Luigi (Baby Shacks) Manocchio and quickly promoted to captain status. His nickname spawns from the fact that through most of the 2000s he stationed his operations out of the Fresh Cheese Shop on Endicott Street and the nearby Gemini Social Club in the North End (Boston’s Little Italy).

“I’m the Cheeseman, you can ask anyone about me…. we straighten out a lot of beefs, a lot of things,” DiNunzio was recorded telling an undercover Fed in 2006.

The FBI mole wanted him to straighten one out for him, too. The Big Cheese was more than happy to oblige.

“They better leave town ‘cause it ain’t going to be safe for them nowhere….If that check isn’t there I’m going to shit and somebody’s going to get hurt,” DiNunzio told the fed.

Costa is DiNunzio’s former driver and bodyguard, Angelesco, one of his top enforcers and Marino and Scarpelli, his current protégés and two of his most trusted young lieutenants. They were all convicted in the case and did prison time themselves.

Per the indictment, Costa 44, Marino, 38, and Scarpelli, 41, “guzzled” a local bookie named Jamie Candelino, intentionally betting into his business through fronts with no intention of ever paying. This caused Candelino to complain to associates of DiNunzio, who in turn tightened the reins on his proxies.

Angelesco was caught on an FBI wiretap discussing the situation with a friend in 2001.

“Carmen told those guys to pull in a bit, I said I’ll make sure Greg knows to run everything by you (DiNunzio) first from now on.”

Costa, Marino and Scarpelli worked as a shakedown team as well, gaining the reputation as serious individuals. Especially, Costa, who became known as a wildcard.

“Why’s Carmen sending Greg out doing this stuff, he knows he’s a loose cannon,” one Boston wiseguy was caught complaining to another on an FBI bug.

The 44-year old hair-trigger tempered Angelesco is a bit of a loose cannon himself.

In October 2001, he attacked local underworld figure Lilo Fabo for assaulting and trying to shakedown one of the drug dealers he protected, beating him severely. To resolve the situation, a sitdown was held at a Pizzeria Uno in the wiseguy hotbed of Revere, Massachusetts and presided over by Patriarca Family elder Connie Frizzi (died in 2011), where Angelesco was ordered to pay for Fabo’s medical bills, per state police files.

Angelesco was acquitted by a jury of the brazen slaying at a 2005 trial where Billy the Angel’s own cousins testified that Angelesco killed De Vito for the fact that De Vito had overseen his ejection from a Providence, Rhode Island topless dance club and subsequent beating weeks earlier.

De Vito was shot numerous times, once at point-blank range in the back of the head, in the crowded Squire Lounge just before midnight, minutes after one of his cousins said that Angelesco recognized De Vito from across the club, told him “I’m going to blow that guy away,” went to the parking lot to retrieve a weapon and returned to shoot him dead in cold blood in front of a group of shocked onlookers near the building’s entrance.

Police found a shell-casing from the 9-millimeter pistol that killed De Vito inside Angelesco’s leased Jaguar. Per FBI records, Billy the Angel’s nickname comes from both a play on his last name and his gangland cohorts dubbing him “The Angel of Death,” in honor of the multiple hits he’s committed on behalf of the crime family.